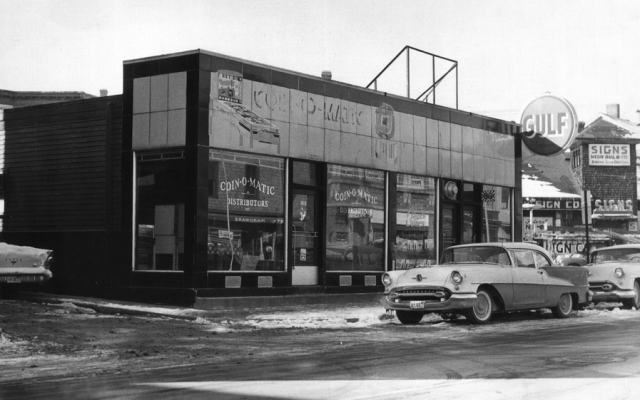 I just listened to the first episode of Crimetown, the podcast about the criminal history of Rhode Island’s capital, Providence. The podcast has zoomed to the top of the charts not just in Rhode Island and the U.S. but around the world. I found the voices of participants, journalists and other sources compelling. Still, it was troubled by the same lame gimmicks that trouble the modern TV documentary. Documentaries nowadays are clogged with fake “scenes” and bad music and tedious pregnant pauses to heighten the drama. Try that without pictures and you have a documentary podcast.

The Crimetown podcast of 18 weekly episodes on Providence was produced by Gimlet Media, Marc Smerling and Zac Stuart-Pontier.

There’s no denying the popularity of the podcast. Maybe a rebranding of the Ocean State as “Rogue Island” is in order. Anything would be preferable to the cockamamie rebranding that crash-burned last year. “Rogue Island” is one of the brickbats hurled at the colony founded by Roger Williams after he was thrown out of Massachusetts in 1636. But they were not kidding.

I myself proposed a Rogue Island Museum many years ago, and mentioned it often in my Journal column. But perhaps wary of my editor’s frequent editor- ials chiding Rhode Islanders for giving a wink and a nod to corruption, I al- ways had my tongue half in cheek and I never made a crusade of it.

In the wake of Crimetown, maybe the time is now.

The RIHMFC (rim-fack) scandal broke here right after I arrived in Rhode Island in 1984. Then came the RISDIC (riz-dick) scandal. In 1998 Gov. Ed DiPrete was jailed. Then Mayor Cianci was sent to prison. Then it was the 38 Studios scandal, starring former Red Sox ace pitcher Curt Schilling, who got the General Assembly to give him $75 million to design video games. Then the state threw its House speaker into the slammer, then the chairman of its Senate finance committee. As of now, two Providence city councilors are under indictment. These represent only the highlights of a sleazy three decades here. This state is journalist heaven – so of course my old employer, the Providence Journal, is laying off reporters by the bucketful.

Still, a Rogue Island Museum would have to reach farther back in time to reach the real mother lode of wrongdoing in this state. On top of his cardinal sin of advocating religious freedom (“soul liberty”), Roger Williams was later sacked from his state job as toll-taker on the bridge over the Providence River just four years after he was hired by the General Assembly. History has not revealed the reason to us. Maybe he harangued bridge users too mercilously, driving them to complain to their assemblymen. Or maybe he was the Rhode Island state government’s first no-show employee.

Rhode Island’s role in the slave trade was morally despicable until selling slaves was banned here; then it became legally despicable as well. For a few weeks during the Dorr Rebellion of 1842, the state had two duly elected governors. Rhode Island’s influential U.S. senator Nelson Aldrich was known during the Gilded Age as “general manager of the United States” (and not in a good way). Then, in 1924, Democratic efforts to fillibuster GOP legislation were stymied by a stink bomb set off by a hired Boston thug in the capitol de- signed by Charles Follen McKim, who is said to have won the commission because he had so many clients among the nabobs of Newport.

But there’s no taped record of these high crimes and misdemeanors, so don’t expect any podcasts of Crimestate. Nevertheless, there are lithographs, daguerreotypes, photographs and film. And there are the kinds of artifacts that are the heart and soul of a museum – the tree that consumed Roger Williams’s skeleton, the ink blotter from the desk of Senator Aldrich, a stone from the mythical slave tunnel leading to the Providence waterfront from the John Brown House, the cigarette butt that Buddy Cianci used to assault his ex-wife’s alleged lover, that sort of thing – always popular, but unsuitable for podcasts.

Yes, of course, there’s Mayor Vincent A. “Dr. Jekyll/Mr. Hyde” Cianci Jr., convicted of assault in 1984 and of corruption in 2002, who led Providence for 21 years. There are storerooms full of Buddy artifacts, many of which were on display at the Mile and a Quarter House restaurant here just last week. Pairing his history with that of New England mob boss Raymond L.S. Patriarca – whom Cianci prosecuted for murder before he ran for mayor – forms the structure of the Crimetown podcast series. Cianci’s exploits need no publicity from this corner.

My favorite has always been mob lawyer Joseph Bevilacqua as speaker of the R.I. House of Representatives and then chief justice of the state Supreme Court. Come again? The mob’s legal counsel was chief justice? Is that a joke? No. Official eyebrows were not raised until after the state police caught him on camera emerging from a motel room pulling up his zipper after a date with a hooker. Yes, he was forced to resign for having maintained contacts he had promised to break off with his old “family” friends. But the mortal sin was not that he kept up his mob ties but that the Rogue Island political class gave him that job the first place. There’s no law to wipe that slate clean.

So where should the museum be erected? The Coin-O-Matic, on Atwells Avenue, cries out for the job. I wish I’d been sufficiently on my toes to urge the Rhode Island Historical Society to buy Ray Patriarca’s headquarters of the New England La Cosa Nostra. (Yes, in a Coin-O-Matic!) There’s a famous photo of him with a cigarette hanging from his lips. The cheesy building survived as the Coin-o-Matic until just a few years ago. Now it is, I think, last time I looked, a tattoo parlor. Or something like that.

The state should buy it and turn it into the Rogue Island Museum. It’s already surrounded by fancy restaurants. What a shot in the arm for tourism in this state, and the restaurant tax! Imagine the possibilities for rebranding! 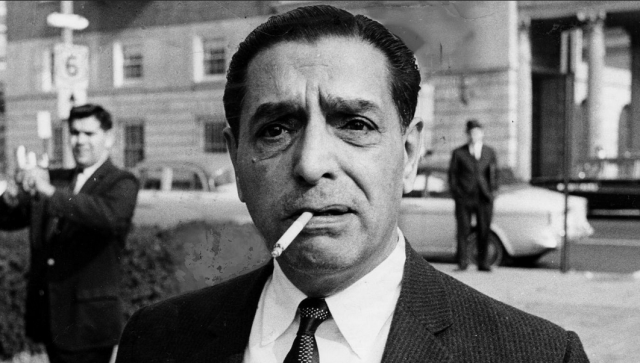 This blog was begun in 2009 as a feature of the Providence Journal, where I was on the editorial board and wrote a weekly column of architecture criticism for three decades. Architecture Here and There fights the style wars for classical architecture and against modern architecture, no holds barred. History Press asked me to write and in August 2017 published my first book, "Lost Providence." I am now writing my second book. My freelance writing on architecture and other topics addresses issues of design and culture locally and globally. I am a member of the board of the New England chapter of the Institute of Classical Architecture & Art, which bestowed an Arthur Ross Award on me in 2002. I work from Providence, R.I., where I live with my wife Victoria, my son Billy and our cat Gato. If you would like to employ my writing and editing to improve your work, please email me at my consultancy, dbrussat@gmail.com, or call 401.351.0457. Testimonial: "Your work is so wonderful - you now enter my mind and write what I would have written." - Nikos Salingaros, mathematician at the University of Texas, architectural theorist and author of many books.
View all posts by David Brussat →
This entry was posted in Providence and tagged Buddy Cianci, Cities, Corruption, Crime, Crimetown, Joseph Bevilacqua, Providence RI, Raymond Patriarca, Rhode Island, Roger Williams. Bookmark the permalink.

4 Responses to A Rogue Island Museum?