Remember to save Alamo 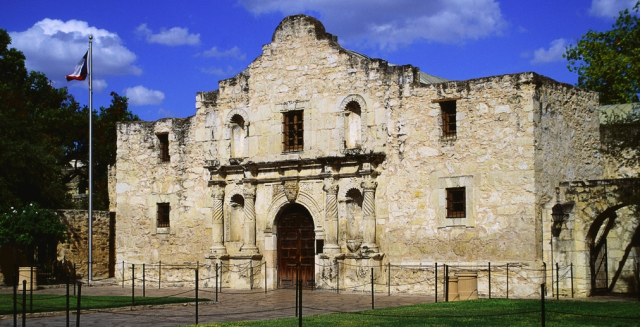 The Alamo, from which modern San Antonio seems to recede. (history.com)

The Houston Chronicle’s article “The Alamo is forgettable. A controversial new plan could change that,” by Texas Architect’s Alyssa Morris, describes a proposal to “remember” the Alamo by tinkering with its site in San Antonio. But her description of the plan contains four words – “at least in gesture” – that should alarm any friend of the historic site. She writes:

A new master plan aims to restore, at least in gesture, conditions of the mission before it was destroyed, highlighting it as a place where indigenous families lived, worked and worshiped for centuries, as well as the site of the 13-day siege.

“At least in gesture” refers to a glass wall that would “suggest” the wall that had surrounded the site before it was attacked, in 1836, by Mexican General (and 11-time Mexican president) Antonio Lopez de Santa Anna. Santa Anna sacked the mission, executed the Texan survivors and ordered the mission demolished, which in part it was. But there was no glass wall at the Alamo. To put one there, as proposed by the Alamo master plan, would be to attack its memory and undermine what remains of its “authenticity.”

Morris observes, rightly or wrongly, that today’s Alamo is under siege by the surrounding urban environment. She writes:

The site retains few of the original features that would have made up the 18th-century Spanish mission, except, of course, the iconic chapel and the long barracks. But these buildings seem curiously out of place and ignored by the high-rises and parking lots of the modern metropolis that grew up around them.

To then erect a glass wall would be to commit a further assault on history, reminiscent of the “ghost reconstruction” of Benjamin Franklin’s house and shop in Philadelphia by Venturi & Rauch. Their abstract frame desecrated that site just as a glass wall would desecrate the Alamo site.

I assume that other parts of the Alamo master plan, by Preservation Design Partnership, of Philadelphia, suggest a more sensible improvement of the site. Today the plan goes before the San Antonio City Council for concep- tual approval. Let’s hope the council will encourage the architect to “tear down that wall” so that the Alamo will not be falsely construed.

Museums of this sort have plenty of techniques to inform the public of what was there. They can erect educational boards that show what historians and archaeologists’ think the original wall looked like. They can actually rebuild the original wall according to such findings. The last thing they should do is to add yet another thing that was not there and should not be there.

This blog was begun in 2009 as a feature of the Providence Journal, where I was on the editorial board and wrote a weekly column of architecture criticism for three decades. Architecture Here and There fights the style wars for classical architecture and against modern architecture, no holds barred. History Press asked me to write and in August 2017 published my first book, "Lost Providence." I am now writing my second book. My freelance writing on architecture and other topics addresses issues of design and culture locally and globally. I am a member of the board of the New England chapter of the Institute of Classical Architecture & Art, which bestowed an Arthur Ross Award on me in 2002. I work from Providence, R.I., where I live with my wife Victoria, my son Billy and our cat Gato. If you would like to employ my writing and editing to improve your work, please email me at my consultancy, dbrussat@gmail.com, or call 401.351.0457. Testimonial: "Your work is so wonderful - you now enter my mind and write what I would have written." - Nikos Salingaros, mathematician at the University of Texas, architectural theorist and author of many books.
View all posts by David Brussat →
This entry was posted in Architecture, Preservation and tagged Alamo, Benjamin Franklin House, Historic Preservaton, History, Philadelphia, Presservation Design Partnership, San Antonio City Council, San Antonio TX. Bookmark the permalink.

7 Responses to Remember to save Alamo