The latest Atlantic Monthly (as it was once called) has a fascinating piece called “Torching the Modern-Day Library of Alexandria,” by James Somers. It chills me to realize that but for a judge’s diktat, 25 million books – not pages, books – are locked in a computer at Google, books that Google had digitized on behalf of the public – and for some money to repay its heavy expense of at least $125 million to scan the books, pay for the copyrights, legal fees and other expenses. Downloading a book in print was to have cost between $1.99 and $29.99; downloading out-of-print books or searching digitized books in or out of print would be free. The revenue would be split between Google and publishers or authors. It was a win-win-win for the public, authors/pub- lishers and Google. But a judge ruled that the class-action settlement that emerged in the effort to balance all the competing rights was sub-par ac- cording to the Federal Rules of Civil Procedure. 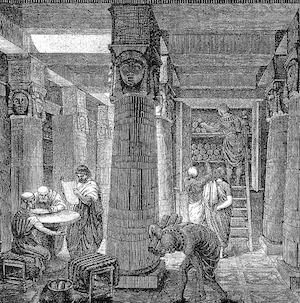 Inside the Royal Library of Alexandria.

Between conception in 2002 and 2011, the latest stage of scanning, 25 million books were copied and stored. They are still there – 50 or 60 petabytes on disk – but nobody is allowed to read them or peek into the digital library except for a dozen or so engineers charged with keeping them locked down. (The original goal of Google was to copy all of history’s approximately 129 million books.) Somers writes:

When the library at Alexan- dria burned it was said to be an “international catastro- phe.” When the most significant humanities project of our time was dismantled in court, the scholars, archivists, and librarians who’d had a hand in its undoing breathed a sigh of relief, for they believed, at the time, that they had narrowly averted disaster.

So the deal was queered because so many people (and rivals such as Microsoft and Amazon) who testified at the hearings about the deal automatically assumed that Google was evil and would end up taking advantage of the public, the authors and the publishers. Maybe Google is evil, that’s above my pay grade to assess, but if this was the mega-corp.’s method of expiation, it behooved the judge to let it go forward. If legal hitches developed later, they could be dealt with later.

For me, such a library would help to offer my passages from books I’m reading (on paper) to readers without having to type them in. That can be tedious. Being able to go to the passage and copy it for you for free in Google Books would have been great. I suppose my “interest” doesn’t quite stack up in the pantheon of scholarship. Still, those near the bottom of the pecking order of those who might find a digital library of all the world’s books useful have a right to feel cheated by Judge Denny Chin.

In his lengthy article Somers does an excellent job describing how Project Ocean was conceived, how books were scanned, the ways competing interests were balanced, and the horns of successive dilemmas faced by Google, Judge Chin and the various parties involved. I hope the authorities can figure out how to let the public visit this incredible library. Meanwhile, it (the article) is a damn fine read.

Parchment scrolls (right) of the type that held books in ancient Egypt and for centuries after.

This blog was begun in 2009 as a feature of the Providence Journal, where I was on the editorial board and wrote a weekly column of architecture criticism for three decades. Architecture Here and There fights the style wars for classical architecture and against modern architecture, no holds barred. History Press asked me to write and in August 2017 published my first book, "Lost Providence." I am now writing my second book. My freelance writing on architecture and other topics addresses issues of design and culture locally and globally. I am a member of the board of the New England chapter of the Institute of Classical Architecture & Art, which bestowed an Arthur Ross Award on me in 2002. I work from Providence, R.I., where I live with my wife Victoria, my son Billy and our cat Gato. If you would like to employ my writing and editing to improve your work, please email me at my consultancy, dbrussat@gmail.com, or call 401.351.0457. Testimonial: "Your work is so wonderful - you now enter my mind and write what I would have written." - Nikos Salingaros, mathematician at the University of Texas, architectural theorist and author of many books.
View all posts by David Brussat →
This entry was posted in Architecture, Books and Culture and tagged Books, Denny Chin, Digital Library, Google, James Somers, Library of Alexandria, Project Ocean, The Atlantic. Bookmark the permalink.

1 Response to 25 million books in limbo