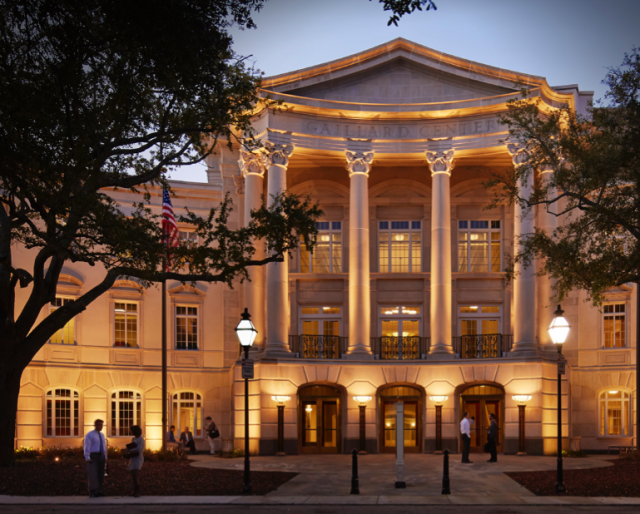 The College of Charleston is to be congratulated for instituting the first classical program of architectural education in the South. Starting this fall, its new master of arts program in Community Planning, Policy and Design will instruct students in progressive traditional design that makes classicism “more culturally diverse, socially inclusive, sustainable, and beautiful.”

You can apply here. The program brochure is here: CPADbrochureWeb

The C. of C.’s new CPAD program joins a recent spate of new classical and traditional coursework within existing university design departments. The University of Colorado, Denver’s College of Architecture and Planning has its new Center for Advanced Research in Traditional Architecture (CARTA), directed by Christine Franck, one of the classical revival’s leading impresa- rios. Catholic University in the District of Columbia has just added a classical concentration to its master’s curriculum in architecture and planning.

Only Notre Dame among universities in the U.S. boasts a full-fledged classical program offering a master’s and doctorate; it ousted its modernist program in a palace coup almost three decades ago. Yale’s program has at least the blessing of diversity, with students able to choose whether to study modern or classical architecture (at least this was the case under recently retired dean Robert A.M. Stern). Several smaller schools, such as Judson University, in Illinois, offer classical coursework in a generally modernist curriculum. Few architecture curricula in America or elsewhere offer even that, or at most schools even architecture history, let alone what the College of Charleston now offers. SCAD, the Savannah College of Architecture and Design, has taken hopeful steps toward offering some classical coursework. The American College of Building Arts, also in Charleston, offers traditional craft courses but not a general education in architecture. And of course the Institute of Classical Architecture & Art and many of its chapters (including the New England chapter) offer certificate courses in classicism. On the down side, a couple of years ago the Boston Architecture College jettisoned its new classical concentration, allegedly for money reasons. Notwithstanding that, perhaps the latest news from Denver, Washington and Charleston heralds the beginning of an expansion of traditional teaching in architectural education. Great! But there is a long way to go.

Since it is my belief that C. of C.’s phrase “progressive traditional” is redun- dant – that classical and traditional architecture have evolved for centuries and are thus naturally, intrinsically progressive – a bit more on what it means from the program’s brochure might be helpful. It states:

Most design schools around the world teach modern architecture, a few tolerate classicism, and only a handful actively promote traditional design. CPAD is counted among the latter, but with a unique and important twist: our students are taught to understand and appreciate traditional design from a global, pluralistic perspective. They know how to draw upon the specific forms and details of local sites, but they are also capable of thoughtfully engaging with any and all traditions when crafting architecture and urbanism to serve diverse populations. Furthermore, our students are encouraged to engage with modern ideas, materials, and aesthetic innovations, to aid them in their quest to make places that are beautiful by classical standards but successful and sustainable by any standard.

That certainly clarifies that progressive traditional isn’t just another way to describe, say, the new Gaillard Center, a concert hall with a highly innovative curved portico just two blocks from the C. of C. campus green and pictured in the CPAD brochure. Designed by David Schwarz, its ornament riffs off African-American motifs. It makes sense to call it progressive traditional.

Seriously, progressive traditional puts a spin on the teaching of the classical tradition, ensuring that its cultural values are as advanced as they are in teaching the modernist tradition. That not only includes diversity, inclusion, sustainability and other values, but even the use of advanced materials in fashioning a classical building. Furthermore, it embraces the influence of design traditions (see below) from around the world and throughout history. Here is a passage on “pluralistic placemaking” from the brochure:

At the core of the progressive traditional philosophy of CPAD is a conviction that all cultures in every part of the globe have made valuable contributions to the realm of design. We celebrate the ennobling truth that all human beings are bound together by abundant commonalities, many of which have been elegantly etched in the history of architecture. We also acknowledge the present and growing need for people to work together and use every tool in the box—whether old or new, and no matter where it was invented—to build a more functional, resilient, and delightful world.

Longstanding Mayor Joseph Riley, recently retired and set to teach in the program, was instrumental in its foundation, as were New Urbanist guru Andrés Duany and architect Schwarz. Nathaniel Robert Walker, a Brown doctoral grad (2014) and assistant professor of architecture historian at C. of C., had the vision and partnered with Prof. Grant Gilmore III, director of its Historic Preservation and Community Planning program, to found the CPAD program along with Grant’s co-director Kendra Stewart, of the Joseph P. Riley, Jr. Center for Livable Communities, and a host of others. Perhaps illustrative of the progress of the so-called New South, using the word progressive in the program’s vision and promotion actually opened, I am told, many otherwise locked political doors in this delicate effort.

The state of South Carolina is also to be congratulated for approving the CPAD program in this day of tight educational budgets. As Duany points out, Charleston should not be importing but exporting architectural expertise. I have no doubt CPAD’s graduates will do great credit to the Palmetto State by beautifying the region, the nation and the world. 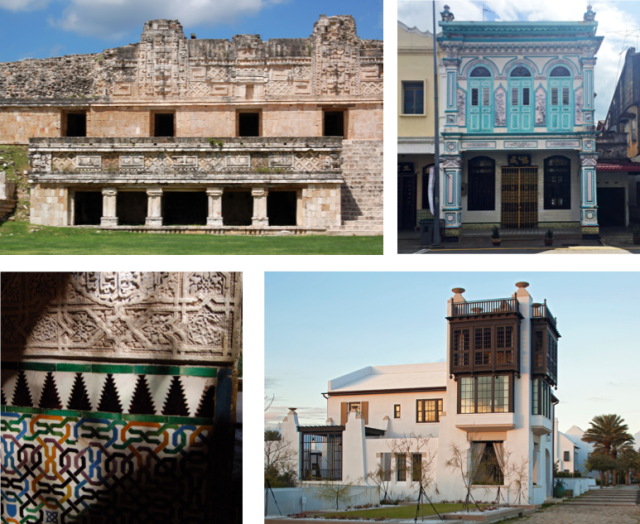 This blog was begun in 2009 as a feature of the Providence Journal, where I was on the editorial board and wrote a weekly column of architecture criticism for three decades. Architecture Here and There fights the style wars for classical architecture and against modern architecture, no holds barred. History Press asked me to write and in August 2017 published my first book, "Lost Providence." I am now writing my second book. My freelance writing on architecture and other topics addresses issues of design and culture locally and globally. I am a member of the board of the New England chapter of the Institute of Classical Architecture & Art, which bestowed an Arthur Ross Award on me in 2002. I work from Providence, R.I., where I live with my wife Victoria, my son Billy and our cat Gato. If you would like to employ my writing and editing to improve your work, please email me at my consultancy, dbrussat@gmail.com, or call 401.351.0457. Testimonial: "Your work is so wonderful - you now enter my mind and write what I would have written." - Nikos Salingaros, mathematician at the University of Texas, architectural theorist and author of many books.
View all posts by David Brussat →
This entry was posted in Architecture, Architecture Education and tagged Andres Duany, Architecture Schools, Charleston SC, College of Charleston, Community Planning Policy and Design, David Schwarz, Joseph Riley, Master's Degree, Nathaniel Walker, Progressive Traditional, South Carolina. Bookmark the permalink.