Taking the plunge in Paris 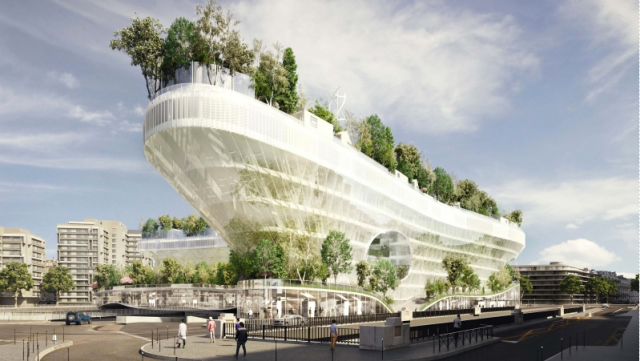 If you have scratched your head at what looks like civic suicide in Paris, manifested by a desire to attack its beauty, an essay by Stephane Kirkland, “Paris in the Twenty-First Century,” might prove interesting. It appears that Parisian modernists, oppressed for decades if not centuries by their respon- sibility to the beauty and the legacy of Paris, have finally decided to bunk duty and embrace ego.

Mary Campbell Gallagher, a leader in the movement to protect Paris from skyscrapers, sent Kirkland’s essay to TradArch, noting he’s a “lovely” person, a “terrific” author of books about Paris, but a modernist architect “who has drunk the Koolaid.” Human nature has invented stranger concoctions. Here, from his essay, published on Kirkland’s website, is his ringing cry to rescue Parisian modernists from the Bastille of Parisian beauty:

This is an exceptionally exciting time for Paris. Through a raft of bold projects, the city is regaining the ambition and vision that propelled it to the forefront of modernity nearly two centuries ago. Paris is again on a quest to project itself as a leader on the global stage. …

Paris continued to have a huge power of attraction, whether for tourism or corporations. But, as the twentieth century came to a close, it was no longer at the forefront in terms of dynamism, vision and innovation. The focus was on picturesque preservation of the historic center … and the business-as-usual attitude of a Paris reliant on the strength of the legacy it had inherited.

Today, things have changed. A new spirit presides over Paris. There is ambition and boldness, a willingness to embrace innovation, a newfound comfort with the idea that inventing our own future is not a form of disrespect or disregard for the past, bien au contraire…

In short, the Paris design elite have embraced the joy of ego at the expense of community. This is the same sentiment that has wrecked so many other cities around the world. Beauty may have held Parisian architects back for decades, because beauty there is stronger than anywhere else. But no longer: Today it is me! me! me! Megotecture! Modernism as Haussmannism, a frisson of self-regard channeling Baron Haussmann, who plowed boulevards through the city’s conurbation of side streets. Haussmann worked for Napoleon III, nephew of Bonaparte. The liberation of the Paris design elite from its long- standing responsibility frees it up to indulge in its own personal L’état, c’est moi! Chuck the “III”: We can be our own Napoleon! Just do it! If you want to reinvent Paris, reinvent Paris!

I do not think I exaggerate. Kirkland’s essay spends much time describing grand plans for Paris that emphasize not its center but its suburbs. Good! Most of the illustrations he includes are renderings of proposals whose context is strictly suburban office pod circa 1980. But these projects may go up in suburban environments much grittier than shown in these renderings. If so, then their new neighbors may wonder why suburban Paris cannot aspire to the same beauty that benefits the residents of central Paris. And who can blame them? It may be an unlikely aspiration, but it’s not an impossible task. It’s merely not quite Stephane Kirkland’s cup of tea, or that of his fellow crusaders against beauty.

It will not be long, however, before they tire of working their magic outside the gates of Paris. Then – surprise! – it will be après moi, le déluge.

This blog was begun in 2009 as a feature of the Providence Journal, where I was on the editorial board and wrote a weekly column of architecture criticism for three decades. Architecture Here and There fights the style wars for classical architecture and against modern architecture, no holds barred. History Press asked me to write and in August 2017 published my first book, "Lost Providence." I am now writing my second book. My freelance writing on architecture and other topics addresses issues of design and culture locally and globally. I am a member of the board of the New England chapter of the Institute of Classical Architecture & Art, which bestowed an Arthur Ross Award on me in 2002. I work from Providence, R.I., where I live with my wife Victoria, my son Billy and our cat Gato. If you would like to employ my writing and editing to improve your work, please email me at my consultancy, dbrussat@gmail.com, or call 401.351.0457. Testimonial: "Your work is so wonderful - you now enter my mind and write what I would have written." - Nikos Salingaros, mathematician at the University of Texas, architectural theorist and author of many books.
View all posts by David Brussat →
This entry was posted in Architecture and tagged Grand Paris, Haussmann, Mary Campbell Gallagher, Modern Architecture, Paris, Reinvent Paris, SOS Paris, Stephane Kirkland. Bookmark the permalink.

4 Responses to Taking the plunge in Paris