Fate of the Fane skyscrapers 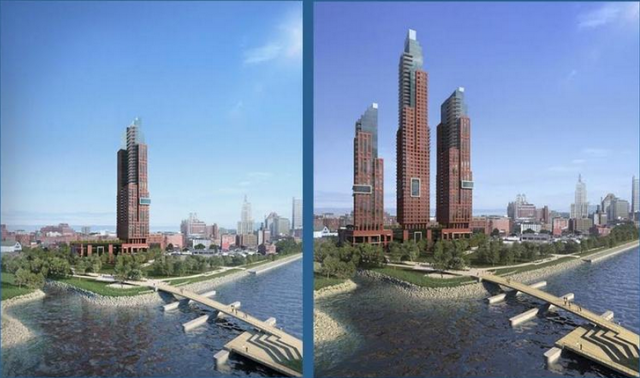 Got my paper this morning and was startled to read the headline “Trio of towers never stood a chance” on the front page. The story in the Providence Journal, by Kate Bramson, seemed to indicate that the project had been mortally wounded by a secret promise by the I-195 District Development Commission to leave a public pathway through the middle of the parcel on which Jason Fane wanted to build three skyscrapers atop a five-story garage. 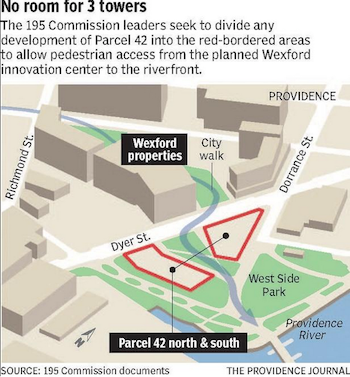 The pathway to the public park along the Providence River, part of a so-called City Walk bisecting the already proposed Wexford innovation campus, was revealed by the commission to the developer, Jason Fane, but not to the public. That left both critics and supporters of the proposed Hope Point Towers in limbo. Why did the project seem to be twisting slowly, slowly in the hot air of the commission’s deliberations? Why? Because nobody but the insiders knew about the promise to Wexford.

But at the end of Bramson’s story, readers awaiting a quote of Fane throwing up his hands in disgust and resignation, learned that Fane is not going away, not yet. The commission, having failed to get him to move his project to a more sensible parcel away from the public park and toward Route 95, is apparently still open to one tower, while Fane’s supporters – mostly contractors and unions – are still pushing a two-tower proposal.

The Providence Journal wrote an appropriately frowning editorial on Feb. 21, “Keeping the R.I. public in the dark,” after the Journal’s successful open- records request revealed the secret doings.

Rhode Island has learned many times that secretive governmental decision making ends up helping special interests and hurting the public. It is extraordinary how often the state’s officials choose to “forget” this lesson.

The commission wrote an oped in reply, “Selfless commission has experience, integrity,” that was also published today.

This grim dance has been the inevitable result of a program openly designed to poke the public in the eye with its poorly conceived architecture. You’d think, now that proposals are finally crowding in for the 195 corridor, that the public would be enthused at the prospect of economic growth and new jobs based on a state plan to build a high-tech sector largely from scratch. But the public has been unenthused, and only partly, I think, because of the public subsidies involved.

For reasons I’ve discussed on this blog and in columns I used to write for a quarter of a century on the Journal’s editorial pages, a large majority of the public dislikes the sterile modern architecture that is the design template for so many development projects. The Wexford campus is just as bad as Fane’s three towers. Panels such as the 195 commission, charged with overseeing the design of these projects, are inherently confusing to the public because panel members try to disguise from the public their sympathy with the design elite’s modernist taste as they deliberate with developers over how new buildings should look. (Developers care far less about style than about securing permits and official support for projects.)

If political leaders would encourage developers to propose buildings that the public could get behind, these long and costly development processes could be streamlined and simplified. Panel members should be encouraged to recognize that they oversee a process intended to benefit the public, not the design elite. Having the developers and the public on the same page in the vital matter of how these projects are supposed to look would reduce the perceived need for secrecy and obfuscation in massaging economic growth.

Here in Rhode Island, a newly rational development process – which would require no new laws and no new state expenditures – would also have the benefit of aligning what is built in the Ocean State with the state’s natural brand. (“Welcome to Beautiful Rhode Island” say all our border signs.)

This blog was begun in 2009 as a feature of the Providence Journal, where I was on the editorial board and wrote a weekly column of architecture criticism for three decades. Architecture Here and There fights the style wars for classical architecture and against modern architecture, no holds barred. History Press asked me to write and in August 2017 published my first book, "Lost Providence." I am now writing my second book. My freelance writing on architecture and other topics addresses issues of design and culture locally and globally. I am a member of the board of the New England chapter of the Institute of Classical Architecture & Art, which bestowed an Arthur Ross Award on me in 2002. I work from Providence, R.I., where I live with my wife Victoria, my son Billy and our cat Gato. If you would like to employ my writing and editing to improve your work, please email me at my consultancy, dbrussat@gmail.com, or call 401.351.0457. Testimonial: "Your work is so wonderful - you now enter my mind and write what I would have written." - Nikos Salingaros, mathematician at the University of Texas, architectural theorist and author of many books.
View all posts by David Brussat →
This entry was posted in Architecture, Urbanism and planning and tagged Hope Point Towers, I-195 District Redevelopment Commission, Jason Fane, Proivdence Journal, Providence RI, Wexford. Bookmark the permalink.

2 Responses to Fate of the Fane skyscrapers