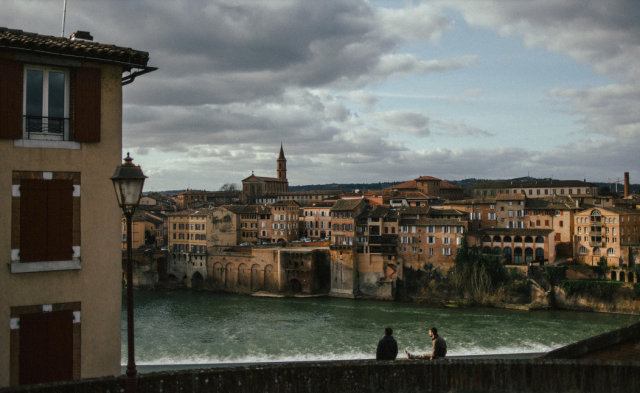 Towns and small cities in France have experienced in recent years something similar to what happened to towns and cities in America during the last half of the 20th century. In France they call urban renewal and suburban sprawl by another name, urban devitalization, the obverse of our optimistic term, urban revitalization.

France is a nation so proud of its national character and its culture that it has an official office to protect the French language from outside influences. It worked for a while but has not worked very well lately. French now bubbles with Americanisms – happy hour, brainstorming, weekend, brunch, job, swag, thug, ASAP, marketing, dress code and more than a mere host of others. The Académie française was founded in 1635 by the Cardinal Richelieu, and it still exists, not that you could tell lately.

Today the New York Times ran a story by Adam Nossiter, “As France’s Towns Wither, Fear of a Decline in ‘Frenchness,’” on the devitalization of Albi, a town an hour from Toulouse in France’s southwest. Nossiter (son of WaPo’s Bernard?) met with a French blogger, Florian Jourdaine, who has written on his blog a meticulous diary of Albi’s decline, shop by shop. Nossiter writes:

To him, Albi’s fate was a cultural misfortune. City leaders had poured money into a high-concept modernistic new culture center at the town’s edge. And the shopping mall had been built. Large grocery chains, called hypermarkets, had also been constructed outside the city, with free parking. It is not that Albi no longer had commerce, or activity. But the essence of the ancient city was being lost.

Things may be even worse in rural France. The architecture critic Robert Russell posted this comment after reading Nossiter’s article:

I was in southern France last May/June and was shocked to see what looked like whole villages closed up: every building shuttered, no one on the streets. I was looking for a putty knife and went through four entire towns before I found a hardware store. These were old agricultural villages but it looked like French ag is following the path of American mega-ag: the fields are getting bigger, the machinery is getting bigger and the farmers are going away.

Of course, plus ça change and all that. The more things change, the more they stay the same. Or, to take another tack, change is the only constant. Two healthy clichés that we all use all the time. So do things change or do they not? France is debating that now. America has debated it for a long time. On second thought, so has France. Does a nation have the right to place limits on change? It is even possible to avoid change? What sort of change? Is it fair to describe some change as good and other change as bad? These questions seem to answer themselves, but they do not. What is national character? Is it something we are bound to respect? In France? In America? Or do the forces that degrade it warrant equal respect? Oops! Excuse me for bringing it up.

(I have run two photos from Nossiter’s story that seem to belie the loss of “Frenchness” in Albi. Other photographs with his story seem to confirm it. Readers can seem them and the story through the link above, but maybe they should think of popping some pills, “uppers,” before reading his story. Or, as NBC puts it on certain “Dateline” reports by news anchor, Lester Holt, #DontWatchAlone.)

(For more detail on his trip to France from Robert Russell, who now teaches at Salve Regina University, in Newport, R.I., scroll down below the following photo. A reader has asked him where he went in France.) 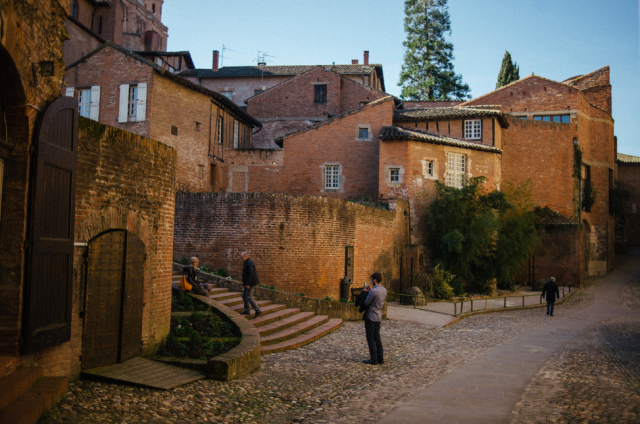 Street in Albi belies decline of its “Frenchness.” (NYT)

Mostly in the Aude and Tarn regions. We had a free house in a bastide – one of those fortified towns the French built when they took the south over in the 13th c. – north of Carcassonne. It had once been a bustling town (I won’t say thriving), but its population is down to about 40, mostly octagenarians. You had to go a couple of miles down the valley to get to a place that had a general store open a couple of afternoons a week.

Carcassonne, by the way, seems to be doing pretty well, though its economy is based almost completely on tourism. Most of its daily commerce has been relocated outside of town, pretty much as described in the NYT article about Albi. The same could be said for Aigues-Mortes, east, in the Bouches-du-Rhone. But it is a fake town, also based on tourism, though I’m sure the few inhabitants would object to that characterization.

We made one trip to Toulouse and on to Moissac in the Midi Pyrenees. We stayed off the A-roads (autoroutes – French high-speed toll roads) and took the national roads, which take twice as long to get anywhere. They also go through the many old villages bypassed by the fast roads, places you have never heard of: Cabardes, Lastours, Revel, Villemur-sur-Tarn, Labastide St.Pierre, La Ville Dieu du Temple. That last one takes longer to say than to drive through. Those are the places that are dead. The farm machinery is too big now to fit in the old barns, so it sits out in the weather.

This blog was begun in 2009 as a feature of the Providence Journal, where I was on the editorial board and wrote a weekly column of architecture criticism for three decades. Architecture Here and There fights the style wars for classical architecture and against modern architecture, no holds barred. History Press asked me to write and in August 2017 published my first book, "Lost Providence." I am now writing my second book. My freelance writing on architecture and other topics addresses issues of design and culture locally and globally. I am a member of the board of the New England chapter of the Institute of Classical Architecture & Art, which bestowed an Arthur Ross Award on me in 2002. I work from Providence, R.I., where I live with my wife Victoria, my son Billy and our cat Gato. If you would like to employ my writing and editing to improve your work, please email me at my consultancy, dbrussat@gmail.com, or call 401.351.0457. Testimonial: "Your work is so wonderful - you now enter my mind and write what I would have written." - Nikos Salingaros, mathematician at the University of Texas, architectural theorist and author of many books.
View all posts by David Brussat →
This entry was posted in Architecture, Preservation, Urbanism and planning and tagged Adam Nossiter, Albi FR, Change, Devitalization, France, NYT, Towns, Urban Revitalization. Bookmark the permalink.

7 Responses to City devitalization in France