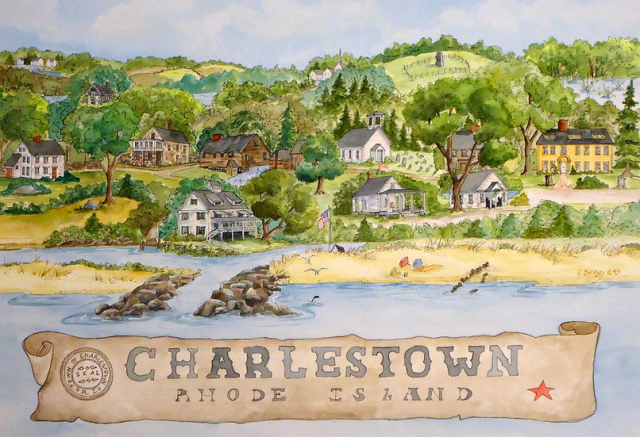 If the description by two Charlestown, R.I., town council leaders of Amtrak’s plan for an alternate route through that town are accurate, the proposal must be stopped. It is no less than “rural removal,” same as the old “urban removal” that cut a huge swath through urban America in the 1950s and ’60s. Fortunately, Providence was spared most of what had been planned during our urban-renewal era, but many big cities were largely ruined by it, with many poor but viable black neighborhoods demolished, their families cruelly dispersed and replaced by highways or less-civilized neighborhoods, often with ugly “Brutalist” architecture inflicted. Now this creature of a policy seems to have returned in rural form and is breathing down the neck of Charlestown. All to save an estimated one minute in travel time.

Here is how Amtrak’s plan was described in the two councilors’ letter to the editor today:

Straightening the track in Charlestown, as near as we can determine, will save only one minute of travel time between Boston and New York. One minute. The price for this is enormous and unsupportable. In Charlestown alone, it will cost the nation’s taxpayers more than $1 billion and cause the destruction of numerous homes, family farms, historic districts, drinking water aquifers, a wild and scenic river, critical habitats and conservation areas, and it will invade Narragansett Tribal Lands.

The plan also brings the threat of eminent domain with a real loss in property value. Real estate values along the Connecticut route have already taken a 25 percent hit.

How can this be so? If it is, the Journal’s online headline got it right: “Charlestown is being railroaded.” Are the disruptions planned for the Connecticut stretch of the route equally dismaying? Maybe the Charlestown councilors, Virginia Lee and Julie Carroccia (president and vice president, respectively, of the council), are exaggerating, or wrong. If so, I will write a post retracting what I have said above. But from what they say, it sounds as if a tragic era long ago put behind us has re-emerged from the Black Lagoon.

This blog was begun in 2009 as a feature of the Providence Journal, where I was on the editorial board and wrote a weekly column of architecture criticism for three decades. Architecture Here and There fights the style wars for classical architecture and against modern architecture, no holds barred. History Press asked me to write and in August 2017 published my first book, "Lost Providence." I am now writing my second book. My freelance writing on architecture and other topics addresses issues of design and culture locally and globally. I am a member of the board of the New England chapter of the Institute of Classical Architecture & Art, which bestowed an Arthur Ross Award on me in 2002. I work from Providence, R.I., where I live with my wife Victoria, my son Billy and our cat Gato. If you would like to employ my writing and editing to improve your work, please email me at my consultancy, dbrussat@gmail.com, or call 401.351.0457. Testimonial: "Your work is so wonderful - you now enter my mind and write what I would have written." - Nikos Salingaros, mathematician at the University of Texas, architectural theorist and author of many books.
View all posts by David Brussat →
This entry was posted in Urbanism and planning and tagged Amtrak, Charlestown, High Speed Rail, Nature Conservancy, Providence Journal, Railroad, Real Estate. Bookmark the permalink.