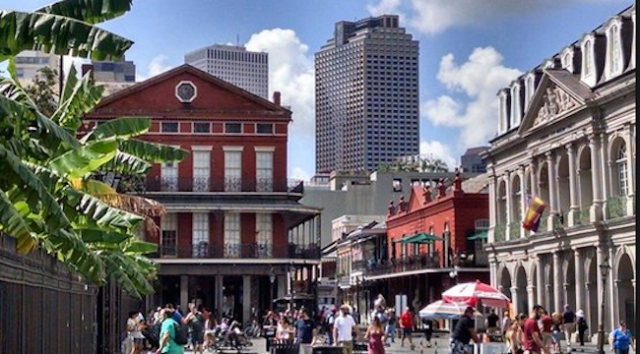 My post “Nostalgia in New Orleans?” generated some comment among traditionalists on the TradArch list, including Louisiana architect Michael Rouchell. A couple of years ago, he contributed an excellent counterproposal to help my effort to get Rhode Island’s governor to ask developers to boost Rhode Island’s “historic” brand in their project designs. He is also leading the formation of a Louisiana chapter of the Institute of Classical Architecture & Art.

Of course, nostalgia is the term of derision that modern architects use for what motivates most people to prefer houses, buildings and other elements of their environment that respect the past as they move into the future. The term “faux historic” got Rouchell’s goat when he read a piece by Richard Campanella in the Times-Picayune entitled “New Orleans’ historical revival architecture: A look to the past for inspiration? Or solace?”

The piece by Campanella goes into greater depth than the piece I link to in my blog post on his study of new post-Katrina housing. His analysis of the historical roots of New Orleans’s shift to neo-traditional architecture is quite fascinating. He writes as an objective observer, a geographer, and yet he seems unable to refrain from rolling his eyeballs at the supposed nostalgia behind the possibility that people want to live in places they find attractive. Among those who turn up their nose at it, nostalgia implies a denial of problematic elements in historical periods and societies to which revivalist designs hark back. In my opinion, such thinkers are thinking too hard. People who like traditional houses, old or new, really just think they are attractive, and have an odd hankering to live in attractive places. Nothing more than that. No unstated agendas, no dog whistles, just personal taste.

Rouchell’s response to Campanella emphasizes, however, the extent to which even in spite of his rolling eyeballs, his mere existence at Tulane University is a positive development. Tulane’s school of architecture has, in the recent past, been unrelentingly modernist in its educational orientation, especially under former dean Reed Kroloff. Now some genuine curricular diversity may be on the verge of erupting at Tulane, as is occurring at the University of Colorado in Denver, the College of Charleston (S.C.) and Catholic University, in Washington, D.C. Here, printed in its entirety due to its excellence, is Rouchell’s response to Campanella’s generally fine piece in the T-P:

First, it must be said that the intent of tradition-based design is not for buildings to appear historical or to look old, or to create a “false historical narrative” as many may suggest, but to follow an established building tradition. With the exception of the last 100 years, this tradition, going back 2,000 plus years, was for architects to take inspiration from the past, and to incorporate current trends and technologies to improve upon that which was done in the past. It is amazing to think of all the traditions that we routinely follow without question, including holiday traditions, religious traditions, patriotic traditions, and all the traditions that are unique to our local culture [including food culture, one might add – ed.]. So why, when it comes to building traditions, do so many architects have a feeling of unease about designing new traditional buildings. Why is this?

When the pioneering architects of the Modernist Movement were experimenting with a new kind of architecture that utilized abstract forms and function-driven aesthetics, they sought a new “International Style” architecture that was completely free from any past architectural precedents, which excluded the use of any traditional forms. If the intent is to be free of the conventions of traditional architecture, then one should also be free to follow those conventions, if so desired. Unfortunately, when modernism was taught in architecture schools, traditional design approaches were discouraged, and were looked at as being less creative than cutting-edge modern designs. Architecture students therefore only learned modernism, and the result, after many generations of this approach, is that most architects today are unable to design traditional buildings. The best attempts often result in buildings that are like caricatures of traditional buildings, with incorrect details and poor proportions. The task of historic preservation work, and designing new buildings and additions to fit within historic neighborhoods, becomes more challenging. In addition, traditional building crafts that were previously commonplace are now specialized and expensive, and survive mainly on large budget historic preservation work.

Because of this decline in the architectural profession and building crafts, I have recently started a Louisiana chapter of the Institute of Classical Architecture & Art, whose mission is promote the current use of classical architecture, and to teach its principles to architects and building professionals who want to competently practice traditional design and construction.

As a Tulane School of Architecture alum myself, and self-taught traditionalist, it is my hope that one day Tulane and other architecture schools will add traditional design to their curriculum.

This blog was begun in 2009 as a feature of the Providence Journal, where I was on the editorial board and wrote a weekly column of architecture criticism for three decades. Architecture Here and There fights the style wars for classical architecture and against modern architecture, no holds barred. History Press asked me to write and in August 2017 published my first book, "Lost Providence." I am now writing my second book. My freelance writing on architecture and other topics addresses issues of design and culture locally and globally. I am a member of the board of the New England chapter of the Institute of Classical Architecture & Art, which bestowed an Arthur Ross Award on me in 2002. I work from Providence, R.I., where I live with my wife Victoria, my son Billy and our cat Gato. If you would like to employ my writing and editing to improve your work, please email me at my consultancy, dbrussat@gmail.com, or call 401.351.0457. Testimonial: "Your work is so wonderful - you now enter my mind and write what I would have written." - Nikos Salingaros, mathematician at the University of Texas, architectural theorist and author of many books.
View all posts by David Brussat →
This entry was posted in Architecture, Architecture Education and tagged Michael Rouchell, New Orleans, Nostalgia, Reed Kroloff, Richard Campanella, Times Picayune, Tulane University. Bookmark the permalink.