Sketch from essay by Wolf von Eckardt, Harper’s, May 1966

Yesterday, into my email inbox, there came a 1966 Harper’s critique of the original World Trade Center by Wolf von Eckardt, the first architecture critic at the Washington Post. I was age 10 in 1963 when he was hired. In 1981, when he moved on to Time magazine, I moved out of D.C. to my first writing job in newspapers, at the Augusta (Ga.) Chronicle. So basically Wolf von Eckardt was at my breakfast table for 18 years of my existence as a young man. Yet I don’t ever remember actually reading any of his stuff. Hmm.

“New York’s Trade Center: World’s Tallest Fiasco,” sent to me by Ron Thomas, is behind the Harper’s paywall, but here are a few passages that thrilled me:

The project appears much like one of those Buck Rogers schemes of “the city of the future” we’ve seen in the comics for years and which have more amused than frightened us. We have never taken them seriously. But the lonely superstructures, superhighways and surrealist wastelands of these visions are now creeping up on us.

Remember, this was in 1966. Von Eckardt not only saw the barbarians storming the gates but the antidote – he was big on Jane Jacobs, whom he mentions. In suggesting an alternative for the WTC site, he writes:

New buildings would be carefully scaled in size and character to their environment. There might, to be sure, be a new skyscraper or two. But they could so easily be handsome and fitting additions to the skyline rather than its ruination.

The mid-’60s were a time of considerable introspection and argument in professional architectural circles. Were there other architecture critics like von Eckardt who challenged modern architecture? For that matter, how long did von Eckardt hold out? Did he eventually drink the modernist Kool Aid? Well, if he did, it was not until after 1977, when he wrote an amazing essay for The New Republic called “The Death of the Moderns.” He writes: 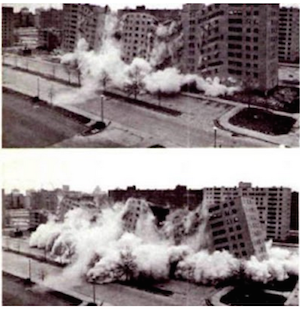 Photos of the demolition in 1972 of the Pruitt-Igoe public housing complex in St. Louis, Mo. (The New Republic, 1977)

While Palladio was busy designing exquisite country houses for the Italian nobility, the peasants were quite capable of building their own habitat, using the accumulat- ed skill and wisdom of centuries as their blueprint. Architecture without architects, as we all know, adds up to lovely villages and towns and can be as delightful as the architecture of great masters — and is frequently more commodious.

Von Eckardt on Corbusier and Mies:

[The chapel at Ronchamp] was a work of abstract sculpture, “not a building, but a monu- ment,” as Le Corbusier put it. It was not so much a building to worship in, as a shrine to be worshipped.

And worshipped it was by the critics, curators, experts, cogniscenti, connoisseurs and teachers of architecture — as devoutly worship- ped as the Miesean glass box on the other end of that total, man- made environment. The common folk still seemed confused. It seems doubtful that the breathless and panting human animal experienced any sense of liberation or comfort. But then, nobody asked.

The marriage of art and technology was never consummated. To this day, building remains the industry tbe industrial revolution has overlooked. We still have a chronic and desperate shortage of decent housing, although there never seems to be a shortage of automobiles. Try as they would, the Modernists could never get houses to roll off the assembly line.

He continues his critique of architecture, the only field in human history that has stressed the importance of rejecting precedent, while at the same time expecting the result to be mass-produced. But no. The only thing mass-pro- duced is the hype. The hypocrisy involved is breathtaking, and yet those who misled the world have held it in modern architecture’s thrall to this day.

Being frustrated in evolving its own, new building technology — as the Gothic style had done — the Moderns substituted a machine esthetic that was mostly symbolic. Mies’s glossy, machine-precise, modular buildings are painstakingly and expensively handcrafted to look mechanical and machine-made; Mies insisted on designing different steel beams for practically every one of his buildings. The romantic wing of the Modern movement, led by Le Corbusier, soon tired even of machine-made materials, such as glass and metal components, and sculpted its bizarre forms mostly in rough, “organic”-looking concrete.

You will have to read the entire article to believe it. It would not be publishable today in any major “legacy” newspaper or magazine. The modernists are too well cemented into the broader establishment by now. I wonder why von Eckardt really left the Post in 1981. Revelations from his 1995 obituary in that paper suggest some possible answers:

On returning to this country [after World War II], he worked for the U.S. Information Agency and then the American Federation of Labor. His family recalled that his career there ended abruptly when he found the recorded music piped into the elevators intolerable and quit. …

After leaving The Post in 1981, he joined the staff of Time. He left Time after the term brownstones was inserted into one of his pieces as a substitute for the town houses he was writing about, according to his wife.

He obviously did not suffer fools gladly. But that does not answer the question of how I could possibly have spent 18 formative years in my youth, with von Eckardt’s opinions of modern architecture sitting before me on the breakfast table at home, without ever imbibing his spirit. I guess that’s a question that must remain unanswered.

By the way, the two illustrations with this post, the Pruitt-Igoe public housing and the Twin Towers, from Harper’s and from The New Republic respectively, both depict buildings designed by Minoru Yamasaki.  Wolf von Eckardt, who noted that in his TNR piece, would surely chuckle at the massive irony that eventually both would be knocked down.

This blog was begun in 2009 as a feature of the Providence Journal, where I was on the editorial board and wrote a weekly column of architecture criticism for three decades. Architecture Here and There fights the style wars for classical architecture and against modern architecture, no holds barred. History Press asked me to write and in August 2017 published my first book, "Lost Providence." I am now writing my second book. My freelance writing on architecture and other topics addresses issues of design and culture locally and globally. I am a member of the board of the New England chapter of the Institute of Classical Architecture & Art, which bestowed an Arthur Ross Award on me in 2002. I work from Providence, R.I., where I live with my wife Victoria, my son Billy and our cat Gato. If you would like to employ my writing and editing to improve your work, please email me at my consultancy, dbrussat@gmail.com, or call 401.351.0457. Testimonial: "Your work is so wonderful - you now enter my mind and write what I would have written." - Nikos Salingaros, mathematician at the University of Texas, architectural theorist and author of many books.
View all posts by David Brussat →
This entry was posted in Architecture and tagged Harper's Magazine, Pruitt-Igoe Housing, The New Republic, Washington Post, Wolf von Eckardt, World Trade Center. Bookmark the permalink.