Pairing the European Union’s new facility in Strasbourg with the medieval painter Brueghel’s Tower of Babel has occurred to not a few on the Internet, and not without very good reason. You can almost assume that the designer intended to dare critics to draw the obvious comparison. Modern architects are like that. Harum-scarum! But the E.U. is a fount of many voices, “out of many, one,” so to speak, and amounting to babble only in the eyes of critics. But the critics may be correct. The E.U. is a quagmire, but less of a babble, literally or figuratively, than the United Nations: Many more voices, even more babblicious.

At the risk of shocking my friend Malcolm Millais’s eyeballs into a furious roll, I have to say that the photo he sent of the E.U.’s new headquarters in Brussels is quite cute. Modern architecture has here created something that may come as close to beautiful as can be imagined by objective observers in the full capacity of their sanity. Below is a nice photograph taken from an extensive shoot at Dezeen, “E.U. headquaters features glass box containing curvaceous glowing lantern.” 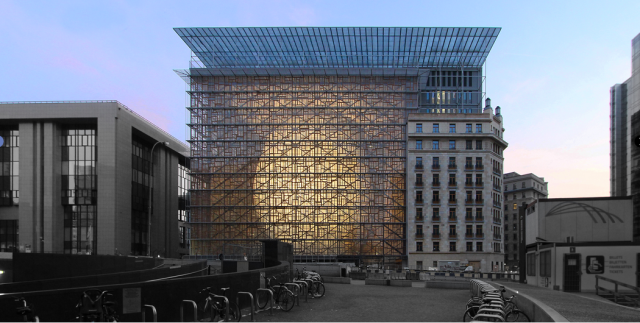 New E.U. headquarters in Brussels. (Photos here and below from Dezeen)

The new building, whose design was led by the Belgian firm Samyn and Partners, perhaps does not even rely for its high aesthetic quality on the historical building at its lower right corner, to which the larger structure has been attached. Another photo below from an angle taken at dusk also shows off its delicate loveliness. The building appears pregnant with the future of Europe. (Yes, I myself cringe at the words flying off my keyboard.)

Having said all of this, let’s reiterate what has not been said: As architecture the building is ghastly, like almost all modernism. Like all such buildings, to imagine a classical or other traditional building in its place is to imagine an improvement in its civic beauty. However delicate it may be, the new E.U. headquarters still crushes the spirit of passersby, hazards the future potential for beauty on the rest of the boulevard, and is unsustainable. For that matter, it is not a building anyway but a sculpture, a big sculpture pretending to be a building. And if the next photo offers any evidence, there are times (such as daytime) when its elegance doesn’t really come up to snuff. Yawn!

The box containing the lantern is interesting, regardless of the last picture. The picture below, contrasting the surface of the old building with the surface of the glass box in which the spherical “lantern” sits, or hangs, or whatever, is described below the photo by Alyn Griffiths, author of the Dezeen article, along with an architects’ statement.

The transparent walls that wrap around the new northeast corner of the building comprise a patchwork of 3,750 recycled wooden window frames procured from renovation or demolition sites across Europe.

“This new facade will be both a practical and philosophical statement about the re-use of these traditional construction elements, expressing the European diversity of cultures,” said the architects.

Haw! Haw! That statement of the architects – how typical. Still, even I must admit that the patchwork of recycled windows is interesting and, if you get close enough, even elegant. How entirely sad that so few works of modern architecture can strive to merit even the derision in masquerade that is this seemingly glowing review from Architecture Here and There!

This blog was begun in 2009 as a feature of the Providence Journal, where I was on the editorial board and wrote a weekly column of architecture criticism for three decades. Architecture Here and There fights the style wars for classical architecture and against modern architecture, no holds barred. History Press asked me to write and in August 2017 published my first book, "Lost Providence." I am now writing my second book. My freelance writing on architecture and other topics addresses issues of design and culture locally and globally. I am a member of the board of the New England chapter of the Institute of Classical Architecture & Art, which bestowed an Arthur Ross Award on me in 2002. I work from Providence, R.I., where I live with my wife Victoria, my son Billy and our cat Gato. If you would like to employ my writing and editing to improve your work, please email me at my consultancy, dbrussat@gmail.com, or call 401.351.0457. Testimonial: "Your work is so wonderful - you now enter my mind and write what I would have written." - Nikos Salingaros, mathematician at the University of Texas, architectural theorist and author of many books.
View all posts by David Brussat →
This entry was posted in Architecture and tagged Brueghel, Brussels, EU Headquarters, EU Parliament, European Union, Malcolm Millais, Samyn and Partners, Strasbourg. Bookmark the permalink.