Save the Porto pavilions 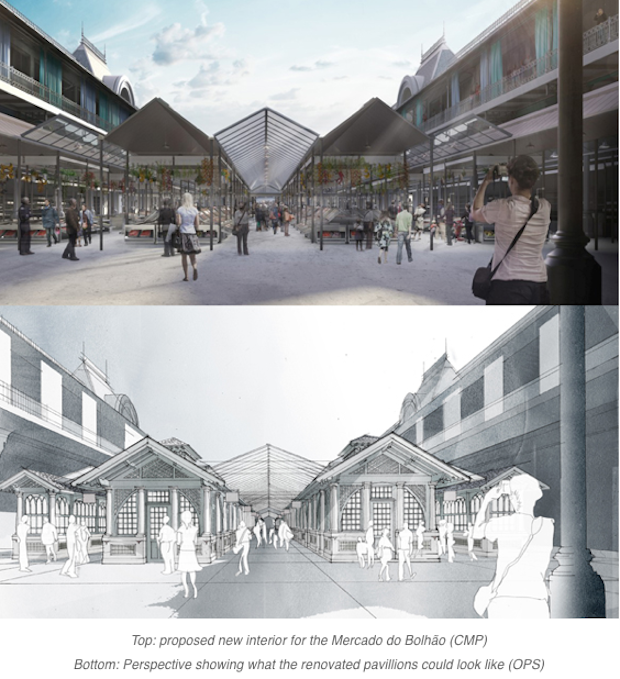 A year ago plans emerged in Portugal to replace the old pavilions of the old market in Porto with new pavilions of a  high-tech appearance. The existing market stalls of the Bolhão should not be replaced but restored. A post, “Bolhão a Year Later,” from the fab website Old Portuguese Stuff tells why, has lots of photos, and offers a petition to help save the pavilions. The petition is in Portuguese* with an English translation following. I did a post in July last year on saving the pavilions, ” Save market in Porto, Port.”

The excuse for the “need” to demolish the stalls is patently absurd:

Two reasons were given for this: the first, that the planned construction of a technical basement makes their removal a necessity. Reconstruction of the barracas was rejected as being pastiche. The second is the Council’s strategic “vision” for the market’s new role, which doesn’t bode well with keeping the pavilions. The Council, we were told, wants a market which can cater to “modern needs” and “the barracas do not allow it”.

If the stalls must be removed, so be it, but they may be removed and … then returned! This churning, this official reluctance to do the obviously right thing, is the result of people who have bought into a machine metaphor for architecture that has no basis in reality. The machine metaphor has not brought machine efficiency, only machine ugliness. It should be consigned to the ash heap of architectural history. Sign the petition!

A doff of the cap to Malcolm Millais, author of Exploding the Myths of Modern Architecture, for reminding me of this tragedy in the works if the public will is not heeded.

* This post originally stated that the petition is in Spanish. I meant Portuguese, of course, and I apologize for my error, and sheepishly thank commenter Raquel for pointing it out.

This blog was begun in 2009 as a feature of the Providence Journal, where I was on the editorial board and wrote a weekly column of architecture criticism for three decades. Architecture Here and There fights the style wars for classical architecture and against modern architecture, no holds barred. History Press asked me to write and in August 2017 published my first book, "Lost Providence." I am now writing my second book. My freelance writing on architecture and other topics addresses issues of design and culture locally and globally. I am a member of the board of the New England chapter of the Institute of Classical Architecture & Art, which bestowed an Arthur Ross Award on me in 2002. I work from Providence, R.I., where I live with my wife Victoria, my son Billy and our cat Gato. If you would like to employ my writing and editing to improve your work, please email me at my consultancy, dbrussat@gmail.com, or call 401.351.0457. Testimonial: "Your work is so wonderful - you now enter my mind and write what I would have written." - Nikos Salingaros, mathematician at the University of Texas, architectural theorist and author of many books.
View all posts by David Brussat →
This entry was posted in Architecture and tagged Bolhao Market, Malcolm Millais, Old Portuguese Stuff, Porto, Portugal, Preservation. Bookmark the permalink.

7 Responses to Save the Porto pavilions