Entrance to the Bodell estate, at 25 Balton Rd., Providence. (wikipedia.org)

So, a little dip into the tall grass of small development. Question of the day: Where is the line between a major and a minor property subdivision? On Tuesday night there was again no quorum at the City Plan Commission for an item on the agenda: the subdivision of the Bodell estate, a mansion on the East Side at 25 Balton Rd., near Blackstone Boulevard. Its owner wants to build five more houses on the land.

The situation, according to one theorist familiar with Rhode Island General Laws Section 45-23-38, is this. The application to subdivide the Bodell estate received its certificate of completeness from the city on Aug. 10. The CPC was without a quorum for this agenda item on Aug. 16 and again on Sept. 20. Two members recused themselves and two have not had their appointments to the CPC confirmed by City Council. Under the law, if 65 days pass without a ruling by the CPC on the subdivision, it is automatically approved. That will be on Oct. 14, four days before the next meeting, slated for Oct. 18.

One of the CPC members to recuse herself, Chairwoman Christine West, is an architect and is apparently being considered (or has already been hired) to design the five new houses the subdivision would enable. Not that there’s anything wrong with that, although eyebrows might very well pop upward at the possibility that her recusal helps set the stage for an automatic approval of the subdivision – again, if it is a minor subdivision. In its section on definitions, the law reads:

(25) Minor subdivision. A plan for a subdivision of land consisting of five (5) or fewer units or lots, provided that the subdivision does not require waivers or modifications as specified in this chapter.

Since the owner of the Bodell estate contemplates five new houses in addition to the existing mansion, it would seem the land is being divided into six lots. That would seem to be a major subdivision. Provided that, etc., etc., so who really knows?  Or maybe the Bodell estate is actually two lots already, and it is the unbuilt lot that is being divided into five units. That possibility is suggested by a map shown below, which was sent out to the Blackstone neighborhood. Either way, neighbors have reason to be wary and to keep their eyes and ears open, and to attend meetings.

The concern in the neighborhood is that if the Bodell subdivision goes through, the owners of the old Granoff estate might try again and a number of other owners of large land parcels in the district might also start to get ideas. The character of the Blackstone neighborhood, already drastically diminished in the past half century by insensitive development, could await another major downhill slide. 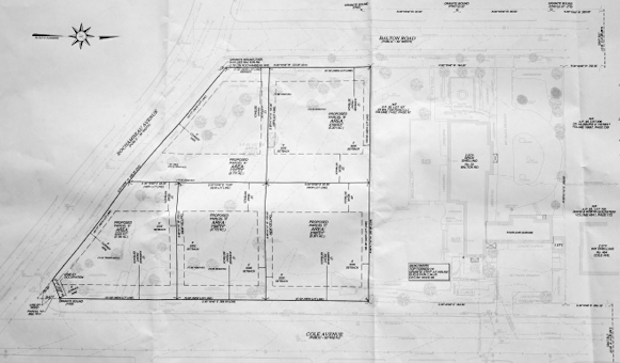 This blog was begun in 2009 as a feature of the Providence Journal, where I was on the editorial board and wrote a weekly column of architecture criticism for three decades. Architecture Here and There fights the style wars for classical architecture and against modern architecture, no holds barred. History Press asked me to write and in August 2017 published my first book, "Lost Providence." I am now writing my second book. My freelance writing on architecture and other topics addresses issues of design and culture locally and globally. I am a member of the board of the New England chapter of the Institute of Classical Architecture & Art, which bestowed an Arthur Ross Award on me in 2002. I work from Providence, R.I., where I live with my wife Victoria, my son Billy and our cat Gato. If you would like to employ my writing and editing to improve your work, please email me at my consultancy, dbrussat@gmail.com, or call 401.351.0457. Testimonial: "Your work is so wonderful - you now enter my mind and write what I would have written." - Nikos Salingaros, mathematician at the University of Texas, architectural theorist and author of many books.
View all posts by David Brussat →
This entry was posted in Architecture, Providence and tagged Blackstone Boulevard, Bodell Estate, City Plan Commission, Granoff Estate, Providence RI, Real Estate, Zoning. Bookmark the permalink.