Posted on September 6, 2016 by David Brussat

Last April, Roger Scruton wrote an essay on an architect in Syria who hopes to help plan her wrecked hometown’s future. I posted Scruton’s essay on my blog, titled “Scruton, Haussmann, Syria.” The reference to Haussmann, who is responsible for the boulevards of Paris, attested to the softening effect classicism has on what might otherwise be horrific incursions into the life of a city. Marwa al-Sabouni expressed regret that over the decades Homs had been modernized in ways that fostered the divisions that led to civil war. Now she expresses those feelings as the subject of a New York Times profile, “Trapped in Homs, Architect Imagines a New Future for Syrian Cities.” Here is a passage in which Timesman Stephen Heyman sums up Sabouni’s views on how poor design led to war:

In the old town [of Homs], these groups lived in relative harmony, a state which the local architecture reflected and reinforced. Sacred, residential and commercial sites occupied shared spaces. Mosques and churches sat side by side. The souk was a hive of economic activity that forced rival groups to deal with each other. Interwoven into the cityscape were squat houses of local basalt connected by twisting alleyways that provided shelter from the sun.

There was a human scale to these cities, a generosity to them, Ms. Sabouni writes, with water fountains, benches and “the cool shade of trees that gave joy throughout the year with their fragrances and fruits.”

But, over time, the classic architecture gave way to a succession of ideas imported to Syria under the banner of progress. These included colonial-era geometric street plans that tore up the traditional architecture, and massive apartment blocks that isolated their occupants from the city center. These errors, Ms. Sabouni says, were compounded by the corruption, mismanage- ment and thoughtless development projects of the Syrian state.

The Times mentions Scruton’s relationship as mentor to Sabouni. I had imagined that her connection to the famed British anti-modernist philosopher would render most unlikely a congenial profile of the Syrian architect in the Times, which rarely has anything nice to say about traditional architecture. Thankfully, I was wrong.

Hats off to Kristen Richards, who alerted me to the NYT piece, and to her irrepressible and irreplaceable websit ArchNewsNow.com, which ran it.

Below is Sabouni’s sketch of a more traditional residential style for Syrian buildings. To me it looks more like Moshe Safdie’s Habitat 67, stacked modular housing in Montreal. But maybe I am wrong about that, too! 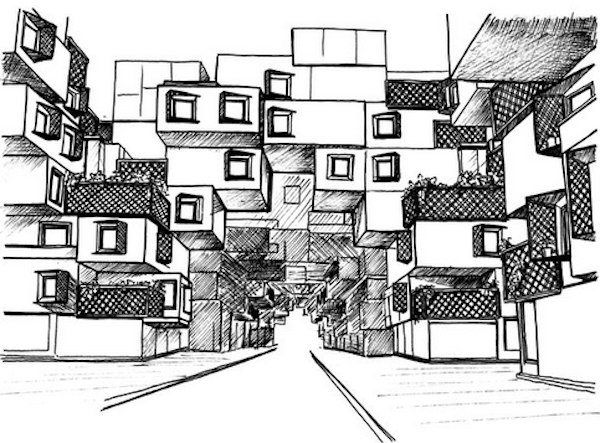 This blog was begun in 2009 as a feature of the Providence Journal, where I was on the editorial board and wrote a weekly column of architecture criticism for three decades. Architecture Here and There fights the style wars for classical architecture and against modern architecture, no holds barred. History Press asked me to write and in August 2017 published my first book, "Lost Providence." I am now writing my second book. My freelance writing on architecture and other topics addresses issues of design and culture locally and globally. I am a member of the board of the New England chapter of the Institute of Classical Architecture & Art, which bestowed an Arthur Ross Award on me in 2002. I work from Providence, R.I., where I live with my wife Victoria, my son Billy and our cat Gato. If you would like to employ my writing and editing to improve your work, please email me at my consultancy, dbrussat@gmail.com, or call 401.351.0457. Testimonial: "Your work is so wonderful - you now enter my mind and write what I would have written." - Nikos Salingaros, mathematician at the University of Texas, architectural theorist and author of many books.
View all posts by David Brussat →
This entry was posted in Architecture, Urbanism and planning and tagged Baron Haussmann, Homs, Marwa al-Sabouni, New York Times, Paris, Roger Scruton, Stephen Heyman, Syria, traditional architecture. Bookmark the permalink.