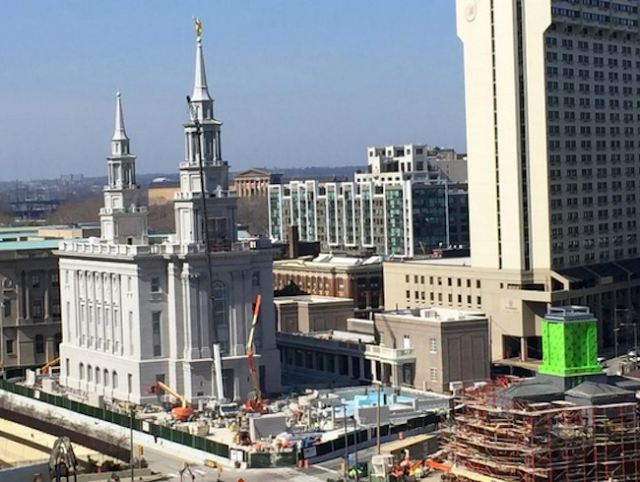 The Church of Jesus Christ of Latter-day Saints has put up a lovely new temple in Philadelphia, one whose traditional design has raised the eyebrows of the city’s leading architecture critic, Inga Saffron, who writes for the Inquirer. She praises the genuine quality of its forthright classicism, but readers may be forgiven for wondering if her plaudits are reluctant – that she feels a church in the 20th century has no right to look like a church.

Here, from “Mormon temple: Radical conservative upstart,” is Saffron’s lead, in which she takes my own line that new classical architecture is radical:

The new Mormon Temple on Logan Square may be the most radical work of architecture built in Philadelphia in a half-century. Clearly, that’s not because the gleaming classical tabernacle offers a fresh, 21st-century take on architectural form-making, or because the designers inventively use new materials, or because they stretch the limits of technology. It’s radical because it dares to be so out of step with today’s design sensibilities and our bottom-line culture. 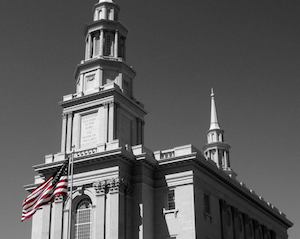 As Saffron points out, the temple was designed by a pair of firms better known for modernist buildings – or, as she puts it, “modern buildings” – as if a new building just erected were not by definition a modern building. Not modernist, necessarily, but modern. It is by such rhetorical flim-flam that the modernists maintain their stranglehold on culture. I wonder whether here Saffron is praising the two firms or chiding them:

The double-spired temple was jointly designed by two firms that generally are in the habit of making modern buildings, Perkins & Will in Atlanta and FKKR Architects in Salt Lake City, but they have gone all-in to make the Mormon sacred center a credible classical building.

Although I hold them in contempt of beauty for most of their work, I praise them here because they have courageously embraced real architecture, be it as an experiment, a sop to profit, or a joke. Any way you slice it, good for them! What the mainline architecture firms around the country and around the world don’t realize is that if they were to start designing buildings people liked, their profits would soar.

Classicists on the TradArch list have been mulling over this design, noting that the Mormons’ attempts at classical churches in recent decades give off more than a whiff of the McMansion. Here is architect Daniel Morales:

I see all the faults you see and more, but I also see them in many historical classical buildings.   The pilasters are too crowded, the plinths unrelated, the entablature above the ground floor has a stunted cornice, and the spire seems to slump away from where it should have risen.  More importantly though, I see an affirmation that this kind of attention to detail and the unapologetic attempt to create beauty from a tested language bodes well for us.

Those are the kinds of details I lack the erudition to pick up on, and so do most people, which is why they like classical more than modernism – the latter’s details are almost entirely obnoxious to normal, intuitive human sensibilities, while classical details need not be perfectly canonical (or perfectly noncanonical) to be perceived by most people as lovely.

But Saffron cannot move briskly along that archi-critical highway without her blinders on, so she concludes:

Some might wonder why the Mormons chose the early American architectural style. Many of their most beloved temples, like the one in Washington, are unrepentantly modern.

Most beloved of highfallutin critics like you, Inga, not most people. If the only Mormon temple in a community is modernist, it will be popular with its congregation, which has no choice in the matter. Like most congregations condemned to worship in the various versions of the Church of St. George Jetson, such ecclessiastical abominations only make it harder for believers to figure out the mysterious ways of the Lord.

Chapeaux off to Kristen Richards, who put Saffron’s piece on the entirely indispensable ArchNewsNow.com, which reminded me I should check out those TradArch emails. 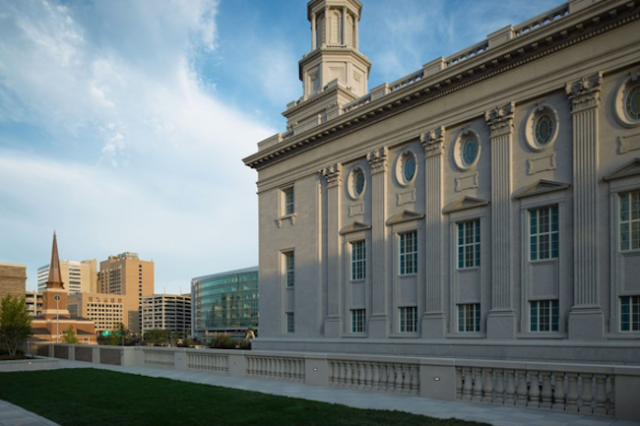 This blog was begun in 2009 as a feature of the Providence Journal, where I was on the editorial board and wrote a weekly column of architecture criticism for three decades. Architecture Here and There fights the style wars for classical architecture and against modern architecture, no holds barred. History Press asked me to write and in August 2017 published my first book, "Lost Providence." I am now writing my second book. My freelance writing on architecture and other topics addresses issues of design and culture locally and globally. I am a member of the board of the New England chapter of the Institute of Classical Architecture & Art, which bestowed an Arthur Ross Award on me in 2002. I work from Providence, R.I., where I live with my wife Victoria, my son Billy and our cat Gato. If you would like to employ my writing and editing to improve your work, please email me at my consultancy, dbrussat@gmail.com, or call 401.351.0457. Testimonial: "Your work is so wonderful - you now enter my mind and write what I would have written." - Nikos Salingaros, mathematician at the University of Texas, architectural theorist and author of many books.
View all posts by David Brussat →
This entry was posted in Architecture and tagged Church of the Latter Day Saints, FKKR Architects, Ingra Saffron, Mormon Temple, Philadelphia, Philadelphia Inquirer, Will + Perkins. Bookmark the permalink.

5 Responses to Mormon temple in Philly