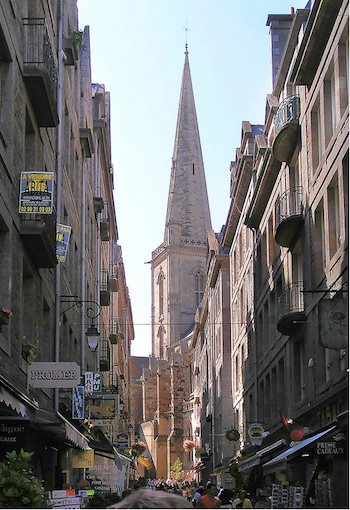 We are still angry and sad about Nice, but let me shift the spotlight to another ancient French resort city, St.-Malo, on the Brittany coast of the English Channel. As I say, an ancient city, but it was shelled and bombed into ruins by the Allies during the battles that followed D-Day. But by 1960 it had been entirely rebuilt, and looks much as it did when it was merely a haven, over the centuries, for pirates and corsairs.

On the website of television travel guide Rick Steves, a commenter called Amy says she has had second thoughts about visiting St.-Malo because of its reconstruction. “Brittany’s St.-Malo: Rebuilt = Underwhelming?” is a collection of comments in reply to Amy. Other commenters take her down briskly for her ridiculous attitude. If anything, St.-Malo’s reconstruction makes it even more important, aesthetically and historically.

Here is one reply, from Ian:

You have to bear in mind that Europe over the centuries has seen more than just WWII, so in fact a lot of stuff has been razed to the ground, rebuilt, destroyed, rebuilt, vandalized and then fixed over the centuries. St Malo is the same thing, that’s the way it is and always has been (although thankfully not so much since 1945). … It doesn’t look “fake” if that’s what you’re wondering, at least I didn’t think so.

Such reconstructions, which are the natural response of a populace to the destruction of its longtime home, are often condemned as “fake” only because the architecture of the past half a century and more renders all preceding work, intentionally or not, as suspect in one way or another. It is “inauthentic” or “not of its time.” Arguably, modern architecture is the real fake, since it is an ideological mistake based on a false analogy – that a machine age requires a machine architecture. The architecture that people will rebuild when it is knocked down is architecture that traces its roots down through the centuries, and that has evolved over time by trial and error, with practitioners handing down best practices from generation to generation. That is real architecture. The citizens of St. Malo are to be congratulated for acting like humans, not like machines.

A very deep bow along with the usual tip of my hat to Malcolm Millais, author of Exploding the Myth of Modern Architecture, for sending this piece, along with another from the Europe Up Close website about St. Malo.

This blog was begun in 2009 as a feature of the Providence Journal, where I was on the editorial board and wrote a weekly column of architecture criticism for three decades. Architecture Here and There fights the style wars for classical architecture and against modern architecture, no holds barred. History Press asked me to write and in August 2017 published my first book, "Lost Providence." I am now writing my second book. My freelance writing on architecture and other topics addresses issues of design and culture locally and globally. I am a member of the board of the New England chapter of the Institute of Classical Architecture & Art, which bestowed an Arthur Ross Award on me in 2002. I work from Providence, R.I., where I live with my wife Victoria, my son Billy and our cat Gato. If you would like to employ my writing and editing to improve your work, please email me at my consultancy, dbrussat@gmail.com, or call 401.351.0457. Testimonial: "Your work is so wonderful - you now enter my mind and write what I would have written." - Nikos Salingaros, mathematician at the University of Texas, architectural theorist and author of many books.
View all posts by David Brussat →
This entry was posted in Architecture, Uncategorized and tagged France, Malcolm Millais, Nice, Preservation, Reconstruction, Restoration, Rick Steves, St.-Malo France. Bookmark the permalink.