How to keep Portland weird 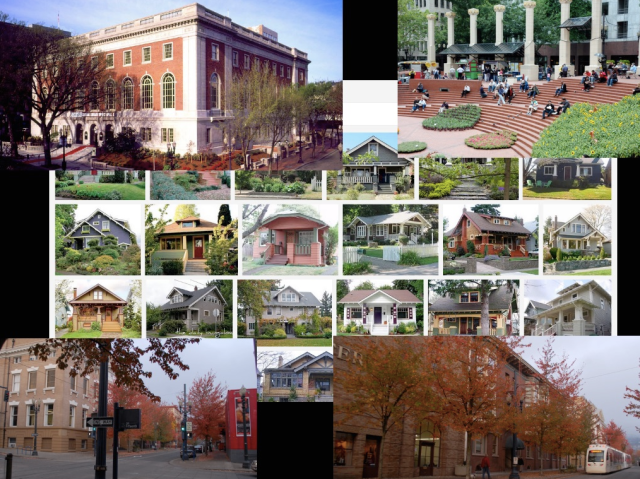 Portland, Ore., is a city so satisfied with itself that it can afford to enjoy a TV show, Portlandia, that makes fun of its foibles. And of course, foibles are easily fobbed off. They are not actual problems. Most cities would love to face Portland’s problems.

I have not been to Seattle, or to Portland since 1966 on a family trip out West. Of the more southerly city it may be said that its hipdom was achieved in the early 1970s when Oregon adopted urban growth boundaries limiting development beyond where suburbs had already sprawled. (Lexington, Ky., had the nation’s first UGB.) The goal of higher density, artfully distributed and infused with public mass transit, was achieved. Cool tech firms arose. Oh yes, and Seattle had Boeing. Portland prospered. Portland preened.

But as Michael Mehaffy points out in a trenchant analysis, “Has Portland Lost its Way?” in Planetizen, the city’s vaunted planning apparat seems unable to address the city’s continued prosperity and popularity. Housing prices are rising faster than anywhere in the country, and developers are responding with bigger and taller residential projects that put Portland’s character at risk. Here is a passage from Mehaffy’s assessment:

… [T]he raging debate is about where the new units are being built—and what impact they are having on the city’s storied livable heritage. Increasing numbers of residents are clearly upset at a wave of historic property demolitions, making way for ungainly ’50s-style white boxes and uber-trendy, in-your-face “space invaders” – or outsized, alien-looking new buildings. Human-scale places are being crowded out by new tall buildings, and luxury condos like the new Park West tower are casting unwelcome shadows over Pioneer Square and other civic spaces.

We’ve been here before. Back in the 1960s, the city’s design and development professions began to transform the city core by demolishing beautiful historic properties and replacing them with a mostly forgettable generation of trendy “designer Modernism” – object-buildings surrounded by parking lots and freeways, leading out to sprawling new bedroom suburbs. Then, as now, Modernism was not just a style of building, but a way of thinking of cities as industrial creations, given an appropriate marketing dazzle by artist-architects. In Portland, the results of this “modernization” were almost universally dismal, as they were in so many other cities.

He says that trend sparked resistance among the population that led to a more locally based, human-scale design and planning aesthetic, culminating in its urban growth boundary. It seemed to work well for decades, but now the boundary appears to be squeezing development upward to make up for its constriction of developable land. Mehaffy says Portland’s planners have “developed an ‘irrational exuberence’ for the symbolism of tall buildings,” sandbagging the wisdom of Jane Jacobs to embrace the folly of Harvard’s Edward Glaeser, a defender of skyscrapers as models for urban growth.

Mehaffy regrets Portland’s apparent desire to copy Vancouver (he does not mention Seattle), where decades of glassy skyscrapers have created an eminently forgettable skyline. But, he says, at least Vancouver has large blocks so that towers placed at their center leave room for low and midrise buildings along streets. Portland blocks are smaller and new skyscrapers are pushing out historic and human-scale buildings – placing the city’s “Keep Portland Weird” ethos at risk. Of course, so pervasive is modern architecture that any city that values beauty these days may be considered weird.

The meat of Mehaffy’s analysis follows, with its sensible recommendations for how Portland can rescue itself by remembering much of what has made it so popular. This is not exactly rocket science. (But oh yes, that’s Seattle’s gig.)

He smiles at this famously liberal city’s embrace of “supply side” – forgetting, perhaps, that a supply-side real estate strategy differs from the supply-side economic strategy that gave the nation almost a quarter century of robust economic growth. Clinton’s economic boom relied upon Reagan’s freeing up the market for the dot-com boom. Lower taxes and higher towers cannot both be the same “supply side” – and of course they are not.

But never mind that.

As one who has long suspected that architectural rendering these days aims not to reveal but to conceal the look of buildings, I was highly amused by Mehaffy’s observation that city officials have imposed “a subjective game of ‘impress the design panelists’ and ‘who’s the best renderer’ – for drawings that are famously unlike the built result.”

Instead, form-based design coding is the way to go, and not just in Portland. Cities should not mandate style – should not need to mandate style – but city officials and civic leaders ought to have a sufficiently robust idea of citizens’ interests to urge developers to design projects that do not smack the voters upside the head. Form-based codes are a loose set of stylistic limits that may be required in places (such as, sadly, Providence, too) where the civic culture cannot manage that level of wisdom on its own.

Mehaffy is the director of the Sustasis Foundation, which supports sensible – often Jacobsian – development emphasizing human scale and neighborhood values in cities and towns globally. He is to be commended for bringing that wisdom to the city that he lives in, and which I’d love to visit again someday. My brother Tony and my nephew Aaron live in Oregon, Ashland and Eugene respectively, so don’t think I won’t be coming. (Please, Portland, do build some new old buildings to make me feel comfy during my stay!) 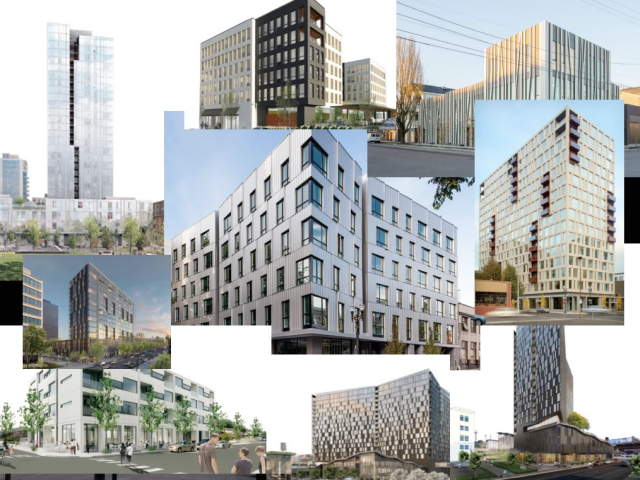 This blog was begun in 2009 as a feature of the Providence Journal, where I was on the editorial board and wrote a weekly column of architecture criticism for three decades. Architecture Here and There fights the style wars for classical architecture and against modern architecture, no holds barred. History Press asked me to write and in August 2017 published my first book, "Lost Providence." I am now writing my second book. My freelance writing on architecture and other topics addresses issues of design and culture locally and globally. I am a member of the board of the New England chapter of the Institute of Classical Architecture & Art, which bestowed an Arthur Ross Award on me in 2002. I work from Providence, R.I., where I live with my wife Victoria, my son Billy and our cat Gato. If you would like to employ my writing and editing to improve your work, please email me at my consultancy, dbrussat@gmail.com, or call 401.351.0457. Testimonial: "Your work is so wonderful - you now enter my mind and write what I would have written." - Nikos Salingaros, mathematician at the University of Texas, architectural theorist and author of many books.
View all posts by David Brussat →
This entry was posted in Architects, Architecture, Architecture Education, Architecture History, Art and design, Development, Humor, Preservation, Providence, Urbanism and planning and tagged Economics, Ed Glaeser, Housing, Jane Jacobs, Keep Portland Weird, Michael Mehaffy, Modern Architecture, Planetizen, Portland OR, Portlandia, Providence RI, Reaganomics, Real Estate, Seattle, Skyscrapers, Supply Side, Sustasis Foundation, Urban Growth Boundary. Bookmark the permalink.

4 Responses to How to keep Portland weird