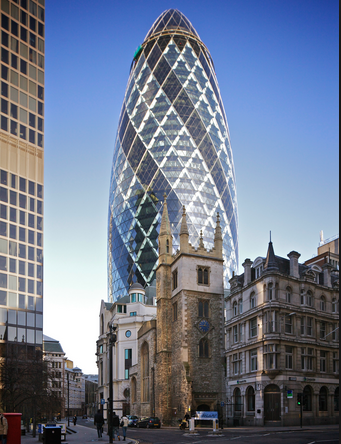 Charles Siegel’s fascinating little book The Humanists Versus the Reactionary Avant Garde warmed my cockles with its picture of Norman Foster’s Gherkin – 30 St. Mary Axe, on Leadenhall Street – thrusting aggressively above a traditional London streetscape. I thought I would love this book. I do, in a general way, but along that way were many vexations, and my margins are filled with question marks and multiple exclamation points.

And, alas, while the photo on the cover is effective, it is not quite forthright. London is already overrun by modern architecture, and has been increasingly since Hitler’s Luftwaffe cleared acres and acres of land in central London for future development. Siegal probably had to search hard to find a picture of the Gherkin with a traditional streetscape to poke its head over.

I suppose when you are about to shove an entire design philosophy out the window, it is natural as a parting shot to say something nice about your victim. Siegel credits modernism with having originally been motivated by social concerns – better worker housing and that sort of thing. Such fantasies are natural given the ubiquity of the modernist propaganda in which we are all marinated. But, first, if they ever truly existed at all, such motives were secondary to the founding modernists’ hatred of traditional architecture, and their careerist goal of supplanting it. And second, the claim that modernist architects wanted to improve society – who doesn’t say that? – tilts Siegel’s perception of the history of architecture in ways that awkwardly twist his humanist prescription for architecture going forward.

The main problem with Siegel’s confrontation between modernists and humanists is that he puts too much stock in what might be called “program.” Buildings do not have feelings and even the conveyance of their designers’ feelings through symbolism is attenuated at best. Anyway, even at the top of the professional ladder, building designers generally are architects and placemakers, not political or moral philosophers. Using his term “avant gardists” for modern architects, Siegel writes:

Avant gardists claim that, because their architecture is futuristic, it is politically progressive, while traditional architecture is conservative. To make our architecture relevant to the key political questions of our time, we need to reject this idea. In today’s technological society, the modernists support the status quo while the humanists are working for social change.

While certainly a nugget of truth resides in that passage – modernists do indeed support the status quo – such an equation is fraught with confusion. Modernists do support the status quo, at least in architecture, but their social agenda is progressive as well. Their journals and conferences are filled with worrying about how architecture can do a better job helping to correct the ills of society. And modernists are not wrong to paint traditional architecture as conservative. It does look backward, yes, but its gaze is directed to finding a more humanist (to use Siegel’s word) way forward. Whether traditional or modernist, architects focus on designing a better building rather than a better society. Social philosophy is above their pay grade; anyway, they naturally assume that a better building trends to a better society.

The point is that all of these labels confuse more than they enlighten, and in the process they risk alienating the humanists’ greatest supporters, most of the general public, which includes many “conservatives,” be they political or aesthetic. They will be and should be offended by Siegel’s tarring them as against positive change. He confuses the world financial elites, whose brand is modern architecture, with your average conservative, many of whom (as we’ve seen) are against the status quo. There are as many conservatives as liberals in the preservation movement, the new-urbanist movement, the maker movement and various slow this or slow that movements.

Don’t get me wrong. Siegel is on the right path in his analysis of the history of architecture, his description of the errors of modernism, and his prescription for a more humanist architecture going forward. But his tendency to give the modernists credit they do not deserve for social concerns translates into an error of analysis. He argues that modernists’ rejection of ornament symbolized its social concerns, and having embraced that fallacy, he condemns any but attenuated ornament in traditional buildings – historical or contemporary – as inauthentic, even dishonest. Siegel seems to have become enmeshed in the modernist propaganda, “catch phrases” used by modernists to dismiss traditional architecture, which he slices up with such relish elsewhere. The following passage sums up the major flaw of his otherwise very perceptive book:

He deploys this critique constantly throughout the book, and it does get tedious, especially as he seems to ignore it toward the end where he praises individual contemporary classicists such as Quinlan Terry, whose work sings the glories of ornament as intrinsic to architecture.

Abetting this curious lapse, Siegel notes early in the book but then ignores the findings of theorists such as Christopher Alexander and Nikos Salingaros. Their neurobiological research identifies ornament as the modern-day equivalent of information that primitive man needed to survive. We do not need anymore to watch for the twitch of a leaf that heralds the tiger lurking behind a bush, but ornament satisfies a deep craving that still resides in our subconscious mind. Instead of warning us of danger today, embellishment enchants us. It soothes our savage breast. The lack of decoration in modern buildings is why so many consider them boring and, often, disconcerting.

Classical and traditional architecture serves the public weal not because its buildings or their designers have a more progressive political agenda than modernist buildings. They create a civilized setting for human discourse in both public and private places because that is what they do – what they evolved over thousands of years to do, using the best methods achieved through trial and error and handed down by generations of builders and architects. Alexander, Salingaros and others understand this subtle play of good design on public consciousness. It is perhaps best stated by Roger Scruton in The Classical Vernacular.

The behavior of classical buildings and streets conduces to civilized conduct in public and private life. Modern architecture may be responsible, literally, for some of the chaos and breakdown of structures in society today, on the march for half a century. It promotes instability, ugliness and alienation, undermining stability and killing beauty wherever it has been built.

Charles Siegel offers a virtuoso description of the state of architecture today, upon which sits the fulcrum of future possibility, threatened by the present and encouraged by a deeper past. He boldly and persuasively debunks the myths of modern architecture. Notwithstanding my picayune objections, The Humanists makes a valuable contribution to the discourse that will ultimately lead to a more humane architecture – and world.

[Last month, Robert Steuteville wrote a more comprehensive review, A Human-Centered Architecture for Our Time, of The Humanists Versus the Reactionary Avant Garde at CNU’s Public Square. Here, in “The reactionary avant-garde,” are my first thoughts about the book and Steuteville’s review.]

This blog was begun in 2009 as a feature of the Providence Journal, where I was on the editorial board and wrote a weekly column of architecture criticism for three decades. Architecture Here and There fights the style wars for classical architecture and against modern architecture, no holds barred. History Press asked me to write and in August 2017 published my first book, "Lost Providence." I am now writing my second book. My freelance writing on architecture and other topics addresses issues of design and culture locally and globally. I am a member of the board of the New England chapter of the Institute of Classical Architecture & Art, which bestowed an Arthur Ross Award on me in 2002. I work from Providence, R.I., where I live with my wife Victoria, my son Billy and our cat Gato. If you would like to employ my writing and editing to improve your work, please email me at my consultancy, dbrussat@gmail.com, or call 401.351.0457. Testimonial: "Your work is so wonderful - you now enter my mind and write what I would have written." - Nikos Salingaros, mathematician at the University of Texas, architectural theorist and author of many books.
View all posts by David Brussat →
This entry was posted in Architects, Architecture, Architecture Education, Architecture History, Art and design, Development, Other countries, Preservation, Urbanism and planning and tagged Avant Garde, Charles Siegel, Christopher Alexander, Modern Architecture, Nikos Salingaros, The Humanists versus the Reactionary Avant-Garde, traditional architecture. Bookmark the permalink.