View of Grand Central and N.Y. Central before Pan-Am. (ny-pics.com)

Few things are, I believe, more ridiculous than the frequent claim that glass buildings “reflect their context” by mirroring their neighborhoods in their glass façades. It does not happen, or even seem to happen, except when the sun is just right. Still less do such buildings “disappear,” as their advocates insist, usually in design hearings before actual approval and construction. (Why is that supposed to be a good thing?) But the six winners of a façade-redesign contest for the Pan-Am (MetLife) Building on Park Avenue near Grand Central Terminal force me to revise and extend my remarks.

Here, from ArchNewsNow.com, are the winners of the “Reimagine a New York City Icon” competition, sponsored by Metals In Construction magazine. The six laureates will split the contest’s $15,000 first-place award. I do not believe it is contemplated that any of the winners’ visions, let alone all six, are intended actually to be inflicted on the building.

None of the entries embraced the mirror concept. The New York Central (Helmsley) Building would still be blocked from the south on Park Avenue by the Pan-Am, which perhaps for that reason is also considered the most hated building in New York City. (Walter Gropius, a founder of modern architecture, was one of its design consultants.) I believe that if the building were literally encased in mirrors, literally reflecting its surroundings, then it would not be such a blot on the city’s architectural escutcheon.

A mirror could be installed in each window frame. The cantedness of the building’s facades, all eight of them, might actually offer an interesting set of reflections up and down Park Avenue. Of course, the buildings have mostly changed, almost entirely for the worse, so now the reflections would reflect the abominable glass boxes of the Mieslings (modernists who copy the work of fellow founder Ludwig Mies van der Rohe). The new Pan-Am windows would need to be two-way mirrors, so as not to box in the building’s poor occupants. That would be expensive but that expense would itself fit into the iconography of iconic modernist buildings. 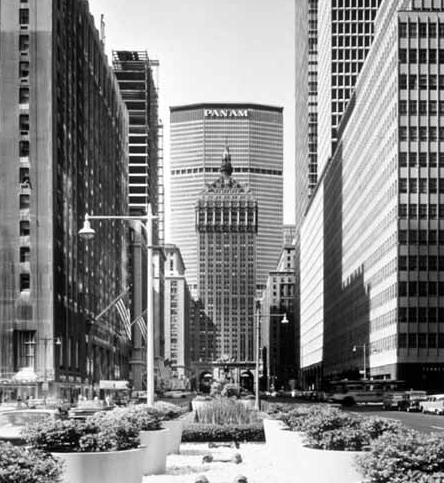 This blog was begun in 2009 as a feature of the Providence Journal, where I was on the editorial board and wrote a weekly column of architecture criticism for three decades. Architecture Here and There fights the style wars for classical architecture and against modern architecture, no holds barred. History Press asked me to write and in August 2017 published my first book, "Lost Providence." I am now writing my second book. My freelance writing on architecture and other topics addresses issues of design and culture locally and globally. I am a member of the board of the New England chapter of the Institute of Classical Architecture & Art, which bestowed an Arthur Ross Award on me in 2002. I work from Providence, R.I., where I live with my wife Victoria, my son Billy and our cat Gato. If you would like to employ my writing and editing to improve your work, please email me at my consultancy, dbrussat@gmail.com, or call 401.351.0457. Testimonial: "Your work is so wonderful - you now enter my mind and write what I would have written." - Nikos Salingaros, mathematician at the University of Texas, architectural theorist and author of many books.
View all posts by David Brussat →
This entry was posted in Architects, Architecture, Architecture Education, Architecture History, Art and design, Development, Urbanism and planning and tagged ArchNewsNow, Grand Central Terminal, Metals in Construction, Mies van der Rohe, New York Central Building, Pan-Am Building, Walter Gropius. Bookmark the permalink.

3 Responses to Reflect the Pan-Am Building