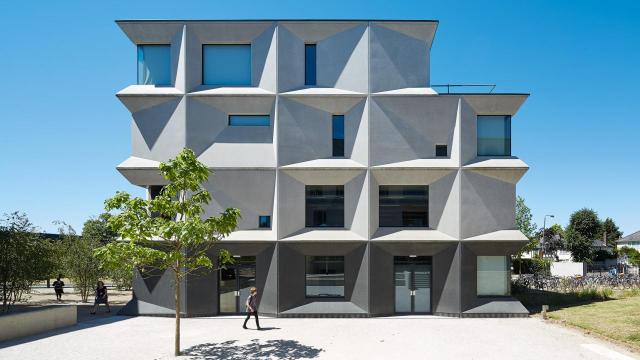 Last week, in “Zaha Hadid gets RIBA medal,” I wrote that Hadid complained about “a tilt toward tradition in London architecture that only she is able to perceive.” I was wrong. The British critic Robert Bevan sees it, too: a trend toward the traditional in recent and proposed building design in London.

Bevan, writing in Intelligent Life magazine, perceives a “Modest Revival” of something or other, which he identifies as a retreat from starchitecture’s infatuation with the “mania for instant icons” that began with Frank Gehry’s Guggenheim Bilbao in the 1990s. The evidence he perceives is pictured above, one of six “neo-Brutalist” buildings, for the campus of a school in London, that won the latest Stirling Prize. Bevan also sees that trend playing out in last year’s Carbuncle Prize being awarded to the Walkie-Talkie, a bulbous building of 37 stories that not only has more square footage on its upper than on its lower stories but whose glass focuses the sun to melt automobiles below. 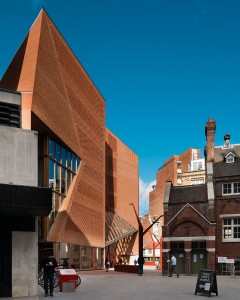 It may be understandable if architects want to retreat from buildings that look about to topple (and until then zap the cars below) toward buildings that merely poke passersby in the eye. But that does not add up to a revival of traditional design, or anything like it. Not even if brick is one of the materials used. It merely reflects the fact that not every new building can be an “instant icon.” Allford Hall Monaghan Morris Architects, the firm that designed the neo-Brutalist building pictured above, certainly would like to be considered starchitects (whether they like the word itself or not). Now that they have won Britain’s equivalent of the Pritzker, I think Bevan’s refusal to anoint AHMM is a sort of rudeness. Why isn’t their building an example of starchitecture?

Surely not because it isn’t big enough – don’t forget there are six in all that won the prize. Bevan says that their buildings fit “tactfully within the school’s existing campus.” I don’t see that they do. They merely add six more black eyes to the school’s collection of Miesian buildings. And Neo-Brutalism counts as traditional only next to Hadid’s oeuvre!

So what gives? Merely that modernism is still up to its old tricks – self-criticism as a road to redemption but not change. Michael Mehaffy writes of Bevan’s dodgy article:

Notice that, in addition to re-packaging and attacking the older fashions – which, as a project built on novelty, is par for the course – they’re doing something else very shrewd.  They’re carving off a disposable core part of the Neo-Modernist project – the starchitect icon – and turning it into a straw man.  “Ah, gad!  How foolish we were to be so caught up in that!”  And then, “Now let us show you this much more modest and contrite architecture, that is still built upon exactly the same avant-garde art chassis, the same engine of environmental industrialization, the same Loosian denuding of ornament, the same Giedionian surrender to mechanization, the same Corbusian banishment of all things from the past, including real urbanism.  Aren’t we brilliant?”

In a way they are – but as propagandists, not as architects.

The building set into the text above, and the building design below, are both by the same firm, O’Donnell & Tuomey. They illustrate Mehaffy’s point, and are ample proof that Bevan does not really see what he says he sees. Bevan pretends to denounce starchitecture but he is not truly celebrating its “twilight.” Not at all. Perhaps these buildings are more traditional than what Zaha Hadid designs, but traditional they are not.

(Rafael Moneo, trying to sell his design in Providence for an addition to the Rhode Island School of Design Museum of Art, at bottom, also claimed that its brick made it fit in.) 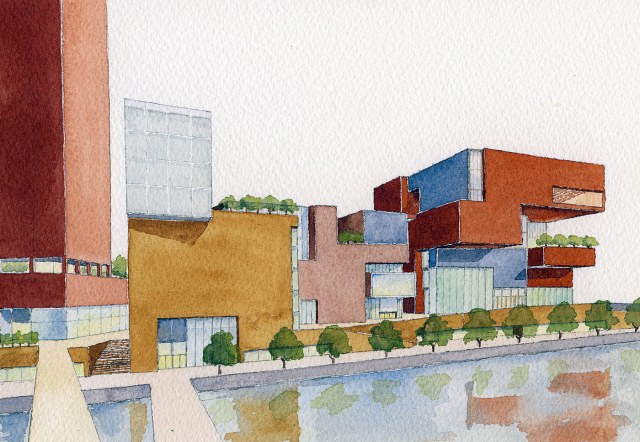 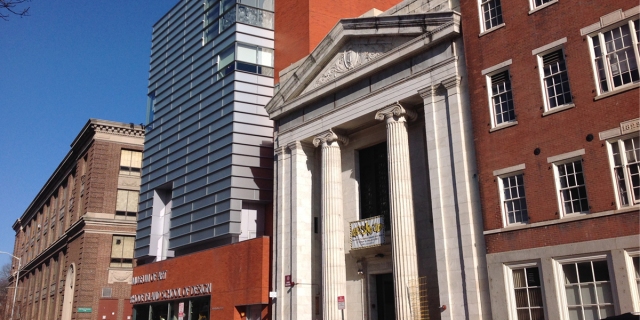 Addition, at center left, to RISD Museum of Art. (alocalstateofmind.com)

This blog was begun in 2009 as a feature of the Providence Journal, where I was on the editorial board and wrote a weekly column of architecture criticism for three decades. Architecture Here and There fights the style wars for classical architecture and against modern architecture, no holds barred. History Press asked me to write and in August 2017 published my first book, "Lost Providence." I am now writing my second book. My freelance writing on architecture and other topics addresses issues of design and culture locally and globally. I am a member of the board of the New England chapter of the Institute of Classical Architecture & Art, which bestowed an Arthur Ross Award on me in 2002. I work from Providence, R.I., where I live with my wife Victoria, my son Billy and our cat Gato. If you would like to employ my writing and editing to improve your work, please email me at my consultancy, dbrussat@gmail.com, or call 401.351.0457. Testimonial: "Your work is so wonderful - you now enter my mind and write what I would have written." - Nikos Salingaros, mathematician at the University of Texas, architectural theorist and author of many books.
View all posts by David Brussat →
This entry was posted in Architects, Architecture, Architecture Education, Architecture History, Art and design, Development, Other countries, Providence, Rhode Island, Urbanism and planning and tagged Carbuncle Prize, Intelligent Life, Michael Mehaffy, Providence RI, Rafael Moneo, RISD, Robert Bevan, Stirling Prize, Zaha Hadid. Bookmark the permalink.