Clay Fulkerson’s model of the Temple of Augustus and Livia, in Vienne, France. (All photos except for Palmyra and the Hall Free Library by Clay Fulkerson)

Driving up Broad Street in Cranston the other day I passed the William Hall Free Library, designed by George Frederick Hall (no apparent relation) and opened in 1927. Delighted to reacquaint myself with its existence, I promised myself to return soon. A day later, out of the blue, I received an invitation from Clayton Fulkerson to view his miniature ancient temples and arches, now on exhibit at that very same location. We met there yesterday.

The library cries out for its own post, which I will deliver as soon as the sun permits photography. Before Clay arrived, I found myself astonished by the quality of the models, which looked for all the world as if they’d been stolen from their ancient locations after being miniaturized with some sort of magical ray gun. But no, Clay informed me that he puts them together himself, and has built seven over a span of two years. So aside from his artistic virtuosity his productivity is inspirational.

“They are constructed,” he told me, “from cast and poured plaster elements, sawed, ground, and glued into shape. A final coat of shellac gives them an antique appearance. … A few of them, notably the temple at Vienne, France, the arch in Pula, Croatia, and the tetrapylon at Palmyra, Syria, are as close to the originals as I could make them. The others are adaptations of existing structures, or completely original designs.” For example, among the adaptations, he did the Arch of Titus (Rome) with an Ionic rather than a Corinthian order.

He said his favorite is his first, a slightly shortened version of the Temple of Portunus in Rome. “It has the quirky flaws typical of a first attempt.” (See first photo at bottom of this post). An amateur such as myself would be hard pressed to detect any deviation from the original – and of course for me the deviation’s inability to undermine the temple’s intrinsic beauty argues that the importance of certain proportions is overstated.

Clay himself is a stickler for the rules of the classical orders, however, and would never claim an accuracy that he has not achieved. I will claim on his behalf the architectural virtue of what he considers to be his inaccuracy!

The detailing of some of the Fulkerson temples and arches is informed by the artist’s travel overseas, especially Rome.

Clayton Fulkerson grew up in Cedar Rapids, Iowa, graduated from the University of Iowa, and started his own firm designing and manufacturing Christmas ornaments, through which he developed his talent in the arts of mold building and plaster casting. He has resided in Warwick for 35 years, retired recently and has devoted two years thus far to his ancient temples, arches and original designs, which partake strongly of the classical orders. He is already planning a series of classically inspired incense burners.

The display of the Fulkerson temples and arches may be seen at the William Henry Hall Free Library, 1825 Broad St., through the end of this month (November). 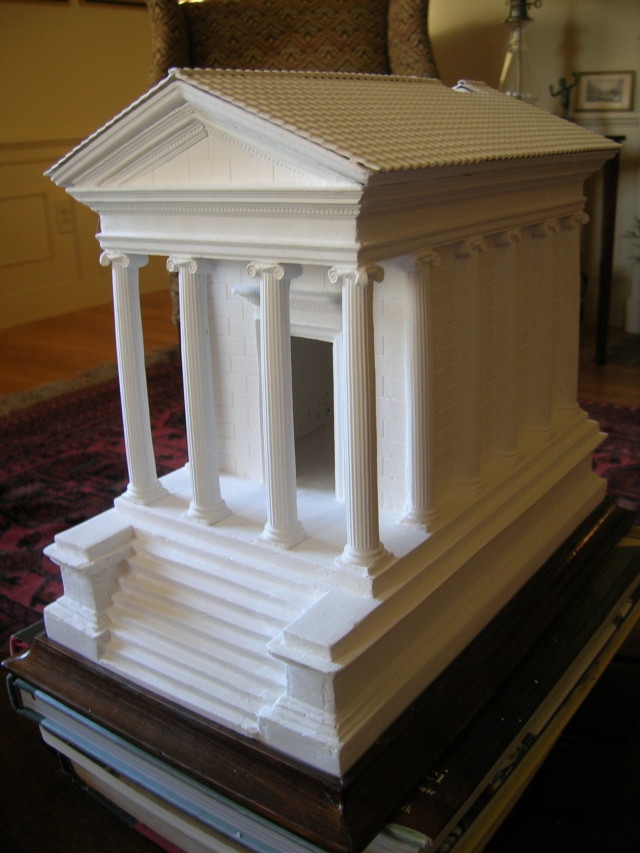 Temple of Portunus, Rome, before shellacking.

Arch of Titus, Rome, with Ionic rather than original’s Corinthian order. 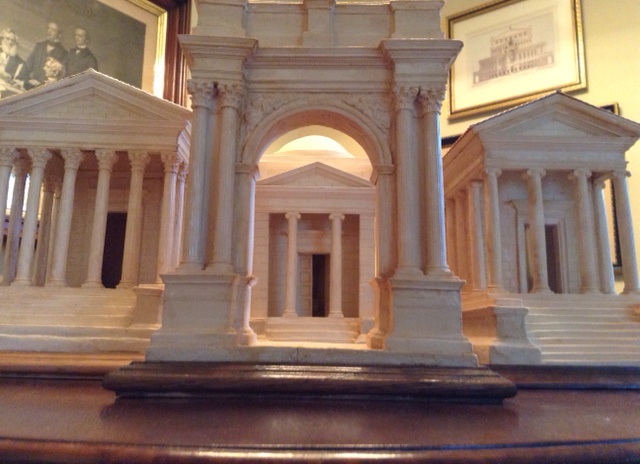 Selection of models arranged symmetrically by the artist.

Arch of the Sergii, in Pula, Croatia. 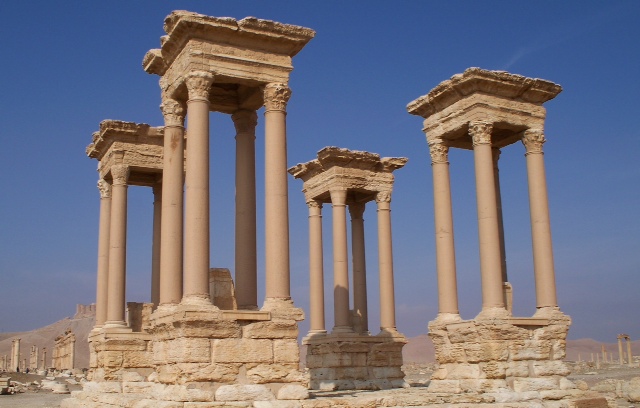 Tetrapylons in Palmyra (from the Internet). 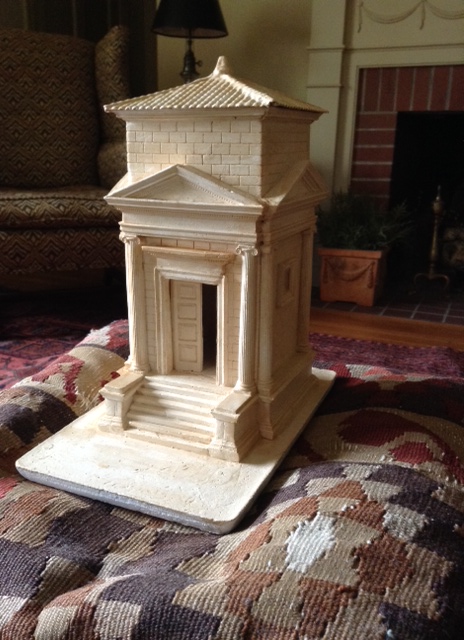 Original design for a tower temple.

Original design for a domed temple. 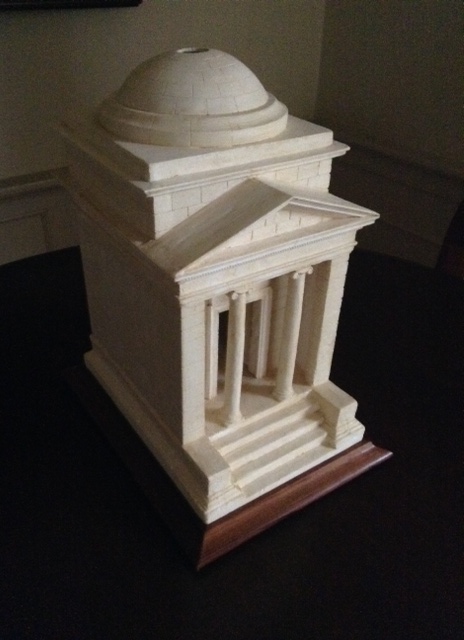 Same design for a domed temple, also an incense burner. 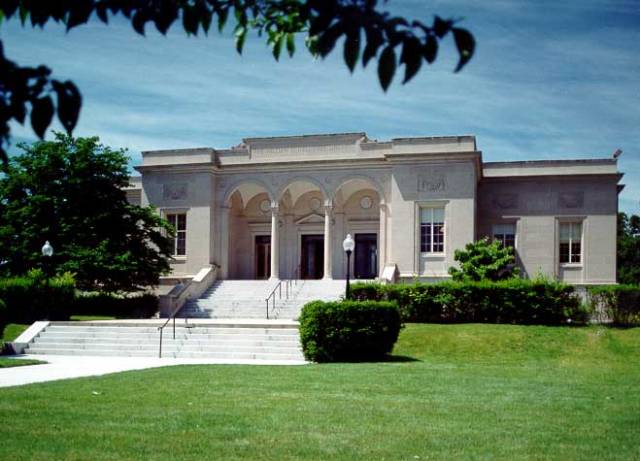 This blog was begun in 2009 as a feature of the Providence Journal, where I was on the editorial board and wrote a weekly column of architecture criticism for three decades. Architecture Here and There fights the style wars for classical architecture and against modern architecture, no holds barred. History Press asked me to write and in August 2017 published my first book, "Lost Providence." I am now writing my second book. My freelance writing on architecture and other topics addresses issues of design and culture locally and globally. I am a member of the board of the New England chapter of the Institute of Classical Architecture & Art, which bestowed an Arthur Ross Award on me in 2002. I work from Providence, R.I., where I live with my wife Victoria, my son Billy and our cat Gato. If you would like to employ my writing and editing to improve your work, please email me at my consultancy, dbrussat@gmail.com, or call 401.351.0457. Testimonial: "Your work is so wonderful - you now enter my mind and write what I would have written." - Nikos Salingaros, mathematician at the University of Texas, architectural theorist and author of many books.
View all posts by David Brussat →
This entry was posted in Architecture, Architecture Education, Architecture History, Art and design, Photography, Rhode Island and tagged Ancient Temples, Clayton Fulkerson, Cranston RI, Miniatures, Models, William Hall Free Library. Bookmark the permalink.

5 Responses to Ancient temples on parade