Rowan Moore, the powerful British architecture critic of the powerful Guardian newspaper in Britain, has done a profile of Zaha Hadid and her life’s work thus far. Moore is not impressed, and his profile is a catalogue of the many difficulties clients must embrace and building users will experience if they are to build or use a place designed by Hadid.

The title of Moore’s article, “Zaha Hadid: A visionary whose ideas don’t always make sense,” qualifies as the most extravagant of understatements. And yet, while Moore does not offer much to differentiate Zaha Hadid’s architecture from the generality of its type, he does not seem to understand that his critique of Hadid is a critique of modern architecture itself.

Moore, after describing the numberless flaws typical of buildings designed by Hadid and her organization, tells the Zaha story of years in the wilderness drawing extraordinarily shaped buildings but getting few jobs, because she is a woman, because she is an Iraqi, because of her personality, because of the outlandishness of her designs. Whatever. But now she has hit pay dirt and her opportunities cannot be enumerated. Moore writes:

At some point in the last decade Hadid and her office could have used their new-found fame and status in one of two ways. They could have addressed their weak spot, which is the high degree of difficulty that it requires to realise their works, in such ways that they really might transform the everyday experiences of living in cities. Or they could have set about creating ever more elaborate and disconnected icons. Which, unfortunately, is what they chose to do.

Does this not describe the challenge facing any major modern architect and architectural firm whose lead designer has cashed in on our age’s addiction to novelty? Alas, the question answers itself.

In searching Google for an image to illustrate this post I typed “Zaha Hadid architecture” and found only drawings of Hadid’s swoopy, jaggedy designs. So I tried “Zaha Hadid buildings” and found the same thing. Then I tried “Zaha Hadid built structures” and found the above image of a building by Hadid under construction. Perhaps I have not tried hard enough, but I still can’t find any Google search configuration that offers photos of structures by Hadid that are built and in use. Must I suppose that even Google is in on the conspiracy to protect the only female global starchitect from criticism? 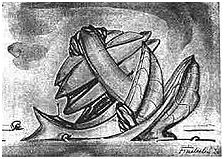 (Top o’ the morning to Malcolm Millais, in Portugal, for sending me this article from the Guardian. In sending me this Rowan Moore article, he writes, “This is yet another example of cognitive dissonance, as Moore rubbishes [Hadid] without  rubbishing modern architecture. Anyway, Hadid is old hat; look at this from Hermann Finsterlin in 1924.” He adds: “I coined the term ‘avant garbage.'” Malcolm wrote Exploding the Myths of Modern Architecture in 2009.)

This blog was begun in 2009 as a feature of the Providence Journal, where I was on the editorial board and wrote a weekly column of architecture criticism for three decades. Architecture Here and There fights the style wars for classical architecture and against modern architecture, no holds barred. History Press asked me to write and in August 2017 published my first book, "Lost Providence." I am now writing my second book. My freelance writing on architecture and other topics addresses issues of design and culture locally and globally. I am a member of the board of the New England chapter of the Institute of Classical Architecture & Art, which bestowed an Arthur Ross Award on me in 2002. I work from Providence, R.I., where I live with my wife Victoria, my son Billy and our cat Gato. If you would like to employ my writing and editing to improve your work, please email me at my consultancy, dbrussat@gmail.com, or call 401.351.0457. Testimonial: "Your work is so wonderful - you now enter my mind and write what I would have written." - Nikos Salingaros, mathematician at the University of Texas, architectural theorist and author of many books.
View all posts by David Brussat →
This entry was posted in Architects, Architecture, Architecture Education, Architecture History, Art and design, Development, Urbanism and planning and tagged Rowan Moore, The Guardian, Zaha Hadid. Bookmark the permalink.