Movable sidewalk at the Paris world’s fair of 1900. (messynessychic.com)

Unforgettable forgotten moments from the past are pictured in this romp called “Unrocognizable Paris: The Monuments that Vanished,” on the blog MessynessyChic.com. The well-illustrated piece recalls when the Champ de Mars was filled with monuments made of “staff,” a mixture of plaster of Paris and other elements. That is the substance used to create one of the earliest and most influential of world’s fairs, the World’s Columbian Exposition in Chicago, which lasted for six months in 1893. It was seen by about a quarter of the U.S. population, which had neither cars nor planes but only trains for transport. It sparked the City Beautiful Movement. Cties around the country redesigned their civic centers in the classical manner based on the White City. Some later critics considered it grandiose but have not come up with anything better. Of course, it no longer exists. Fire took much of it after the fair closed. Too bad it was built of staff!

Many of the buildings and statues of the [Paris] world’s fair were made of staff, a low-cost temporary building material invented in Paris in 1876, which consisted of jute fiber, plaster of Paris, and cement. Often the temporary buildings were built on a framework of wood, and covered with staff, which was formed into columns, statuary, walls, stairs, etc. After the fair was over, the buildings were demolished and and all items and materials that could be salvaged and sold were “recycled.”

This messynessychic.com article, whose authorship is not identified, deals with the Exposition Universelle of 1900, in Paris. It was this world’s fair that gave Paris its famous moniker, the City of Light. The first Olympics outside of Greece took place in Paris at the same time. The fair celebrated advances in the new technology called electricity. The Eiffel Tower was painted yellow for the occasion. A third of the way down is a fascinating film clip of the fair shot by Thomas Edison (or one of his workers). Also note a photo of the movable sidewalk in which a woman is losing her balance. Fascinating stuff!

Hats off to Gary Brewer for sending the link to TradArch. 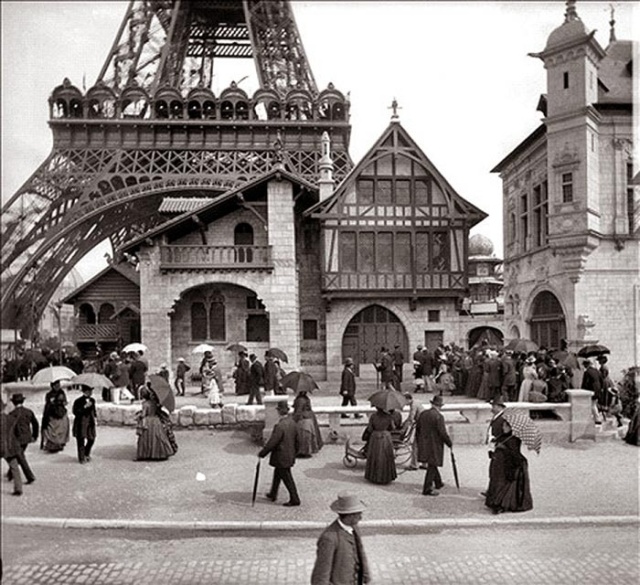 This blog was begun in 2009 as a feature of the Providence Journal, where I was on the editorial board and wrote a weekly column of architecture criticism for three decades. Architecture Here and There fights the style wars for classical architecture and against modern architecture, no holds barred. History Press asked me to write and in August 2017 published my first book, "Lost Providence." I am now writing my second book. My freelance writing on architecture and other topics addresses issues of design and culture locally and globally. I am a member of the board of the New England chapter of the Institute of Classical Architecture & Art, which bestowed an Arthur Ross Award on me in 2002. I work from Providence, R.I., where I live with my wife Victoria, my son Billy and our cat Gato. If you would like to employ my writing and editing to improve your work, please email me at my consultancy, dbrussat@gmail.com, or call 401.351.0457. Testimonial: "Your work is so wonderful - you now enter my mind and write what I would have written." - Nikos Salingaros, mathematician at the University of Texas, architectural theorist and author of many books.
View all posts by David Brussat →
This entry was posted in Architecture, Architecture History, Art and design, Old Video, Other countries, Photography, Preservation, Urbanism and planning and tagged 1893, 1900, Chicago, City Beautiful Movement, Eiffel Tower, Exposition Universelle, Gary Brewer, Olympics, Paris, Thomas Edison, World's Columbian Exposition. Bookmark the permalink.