“No tears for tankies” 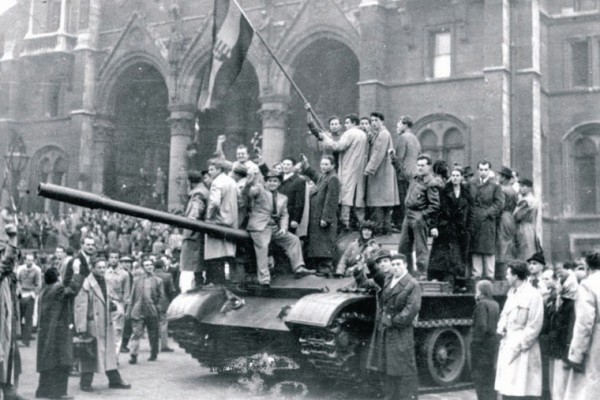 Scene from the Hungarian uprising in 1956 Budapest. (dailynewshungary.com)

Bust of Stalin. (The Charnel-House)

Here, from way out in total left field, is something completely off the radar of this blog. Yet I found it so perversely fascinating that I had to post. Last time I posted on a subject from the Charnel-House blog, blogmeister Ross Wolfe had titillated me by writing about how Le Corbusier screwed up the little hideaway of a friend by covering its walls with an obscene graffiti he considered “painting.” She was upset at him, and since Wolfe ran a photo I’d never seen of Corbu naked, I had to go with it.

That piece had an obvious link to this blog’s theme of architecture. “No tears for tankies” does not. It tracks inside lefty baseball and includes a battle on the far, far left about a term supposedly related to those few supporters of Stalin who remain. It’s very amusing and actually quite pleasant in its tone, notwithstanding its subject.

If there is no connection, however, I will have to invent one.

The debate over the definition of “tankies” has its parallel – no, not a very strong one, but bear with me – to debates over nomenclature among classicists. Here is Wolfe’s comment on the definition of tankie:

Briefly, a word on the provenance and history of the term “tankie,” for the uninitiated. Amber’s definition — “slang for Soviet apologist, or actual Stalinist” — is serviceable, but rather imprecise. “Tankie” was an epithet coined on the British left several decades ago to denote anyone who still supported the Kremlin line after the Soviet invasion of Hungary in 1956.

I am intrigued by this definition because I am a quarter Hungarian and my wife is a full-blooded Hungarian whose parents escaped from Hungary in 1956. I actually left a comment suggesting that while my heartstrings were attached to the definition above, a tankie might simply be anyone who’s “in the tank” for anyone or anything. Just as most architects today are “in the tank” for Le Corbusier and modernism. They have “drunk the Kool-Aid.”

Anyway, I have linked to the essay and I am sure it will prove a joyful romp for those of a certain mindset. The links dig you in even deeper. Enjoy!

This blog was begun in 2009 as a feature of the Providence Journal, where I was on the editorial board and wrote a weekly column of architecture criticism for three decades. Architecture Here and There fights the style wars for classical architecture and against modern architecture, no holds barred. History Press asked me to write and in August 2017 published my first book, "Lost Providence." I am now writing my second book. My freelance writing on architecture and other topics addresses issues of design and culture locally and globally. I am a member of the board of the New England chapter of the Institute of Classical Architecture & Art, which bestowed an Arthur Ross Award on me in 2002. I work from Providence, R.I., where I live with my wife Victoria, my son Billy and our cat Gato. If you would like to employ my writing and editing to improve your work, please email me at my consultancy, dbrussat@gmail.com, or call 401.351.0457. Testimonial: "Your work is so wonderful - you now enter my mind and write what I would have written." - Nikos Salingaros, mathematician at the University of Texas, architectural theorist and author of many books.
View all posts by David Brussat →
This entry was posted in Architecture, Books and Culture, Humor, Other countries and tagged Communism, Corbusier, Hungary, Language, Ross Wolfe, Stalin, The Charnel House. Bookmark the permalink.

2 Responses to “No tears for tankies”