A monument to courage 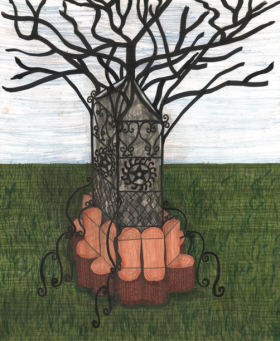 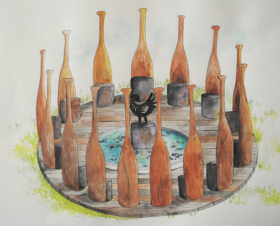 “Gathering for the Journey” 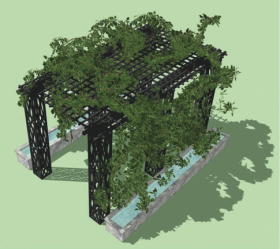 “That Which Does Not Burn” 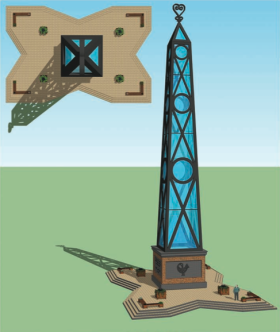 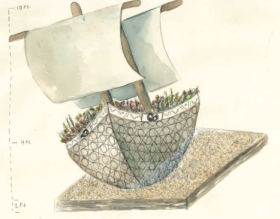 A newly proposed memorial, called the Monument to the Courage of Those Who Suffered During the Atlantic Slave Trade, was the project for students in Prof. Nathaniel Robert Walker’s Architecture of Memory course in the Art and Architectural History Department of the College of Charleston.

The students split into groups of three, more or less, and submitted designs for the memorial, which are now on display at the college until Sept. 1. Professor Walker sent me the exhibit’s catalogue, and the booklet revealed how thoughtful the students were using design to reflect their noble ideas.

Hush Harbor, the catalogue’s title signifying a place for quiet storytelling, opens with a description of memorial forms from around the world and down through time:

The ceremonial gateway, the obelisk, the sacred enclosure, the symbolic sculpture, and the seat for rest and reflection – these monumental memorial forms are found all over the world, in countless cultures, from deep antiquity to the present day. They are useless from a utilitarian point of view, but crucially important as tools for marking special places and recalling key moments that might otherwise be forgotten. … They carve out a place for the past in the present.

The students’ memorial designs reflect all of these forms that come down through the classical tradition, a tradition that emerged not just from Greco-Roman history but from around the world, arising naturally from the needs of mankind. Often, as has occurred in monuments down through history, the student designs embrace more than one form.

The nine proposals’ titles give clues to the intent of their aesthetic expression:

The student designs are joined by that of their teacher, who has submitted “A Tree of Light & Hush Harbor,” a 100-foot obelisk of steel, illuminated from within, backlighting on each of four sides the branches of a tree motif on top of which sits a sankofa, a bird plucking a seed from its own back – just beneath the obelisk’s crown, a prismatic blue glass beacon. To the side of the obelisk’s base is a circle of megalithic chairs – a “hush harbor,” or secret place for slaves to gather beyond the eyes of their owners and overseers.

The students clearly learned much from Professor Walker – I have, too, because he is a dear friend – and their ability to embue physical form with symbolic meaning is impressive. All of their memorial designs are worthy of consideration as the project to build Charleston’s International Museum of African American History advances.

The chosen memorial would grace the entry to the museum. It will be the memorial’s unofficial role to make up, in its elegance and symbolic meaning, for the inelegance and vacancy of meaning embodied by the design of the museum, as currently proposed. It is a mere rectangular box on stilts, with plain glass frontage, designed by Henry Cobb of the firm Cobb, Pei & Free, founded by the late modernist architect I.M. Pei, and destined to hover intrusively above the market where Africans once were sold as slaves to their fellow humans.

I hope Charleston will come to its senses regarding the museum design. Henry Cobb is mentioned as a supporter of this student memorial design project, and Professor Walker insists that Cobb’s design “has many virtues.” I could not detect a single one, and must insist that the design’s vacuity will only make it harder for the museum to articulate meaning – because his design is inarticulate.

Let us hope Cobb, or Charleston, will embrace a design more sensitive to history and to one of its most glorious cities.

If so, future visitors to the IMAAH will be able to reflect on history without the weight of its repudiation on their minds. And if a more sensitive, sensible museum design is adopted, then the Monument to the Courage of Those Who Suffered During the Atlantic Slave Trade will not have to suffer the indignity of carrying the museum on its back.

This blog was begun in 2009 as a feature of the Providence Journal, where I was on the editorial board and wrote a weekly column of architecture criticism for three decades. Architecture Here and There fights the style wars for classical architecture and against modern architecture, no holds barred. History Press asked me to write and in August 2017 published my first book, "Lost Providence." I am now writing my second book. My freelance writing on architecture and other topics addresses issues of design and culture locally and globally. I am a member of the board of the New England chapter of the Institute of Classical Architecture & Art, which bestowed an Arthur Ross Award on me in 2002. I work from Providence, R.I., where I live with my wife Victoria, my son Billy and our cat Gato. If you would like to employ my writing and editing to improve your work, please email me at my consultancy, dbrussat@gmail.com, or call 401.351.0457. Testimonial: "Your work is so wonderful - you now enter my mind and write what I would have written." - Nikos Salingaros, mathematician at the University of Texas, architectural theorist and author of many books.
View all posts by David Brussat →
This entry was posted in Architecture, Architecture Education, Architecture History, Art and design, Development and tagged College of Charleston, Henry Cobb, Memorials, Museum of African American History, Nathaniel Walker, Slavery. Bookmark the permalink.

1 Response to A monument to courage