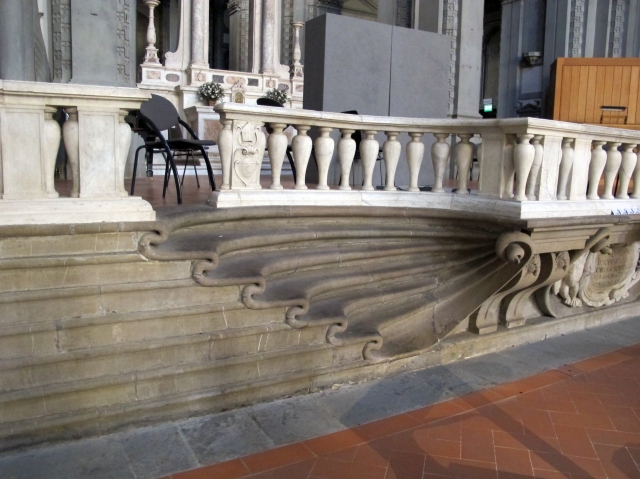 Steps leading from the nave to the choir inside a church in Florence. (courtesy of Joel Pidel)

Tomorrow I jet down to Charleston, S.C., to confer on matters architectural with people I’ve never met but with whom readers of this blog are familiar. They are the TradArch family of architects and architectural busybodies (like me). Before I leave I’d like to stroke readers of this blog by posting a photo, above, that came through TradArch member Joel Pidel, who titled his post “buontalenti,” which fits perfectly. It is stairs to the choir from the nave in the Florentine “church of S. Stefano al ponte (vecchio),” as Joel put it.

It struck me as beautiful and yet noncanonical – heterodox classicism will no doubt be a big topic at what everyone is calling the “classicist garden party,” picking up on criticism by Andrés Duany that practicing classical architects today are too wedded to the canon of the Orders described by Vitrivius in his Roman treatise, and the Orders derived therefrom by what Andrés calls the First Recall – architects working to bring order to classicism after its “drift” toward Gothic and Romanesque during the Middle (Dark!) Ages.

Are there any classical architects practicing today who would kick this stairway to the curb because it is not canonical enough? Just wondering. (By the way, are the balusters on the porch upside down, or is that just another conventional way of arraying them?)

What about the picture below that I took of a church in Prague – no doubt an example of the Baroque. I go back to this photograph again and again just to luxuriate in its beauty. I can imagine an orthodox classicist declaring that its curvature is not found in orthodox classicism, but I cannot imagine any such practitioner rejecting either the work nor its designer, or denying their place in the broader scheme of classical architecture. Thoughts? 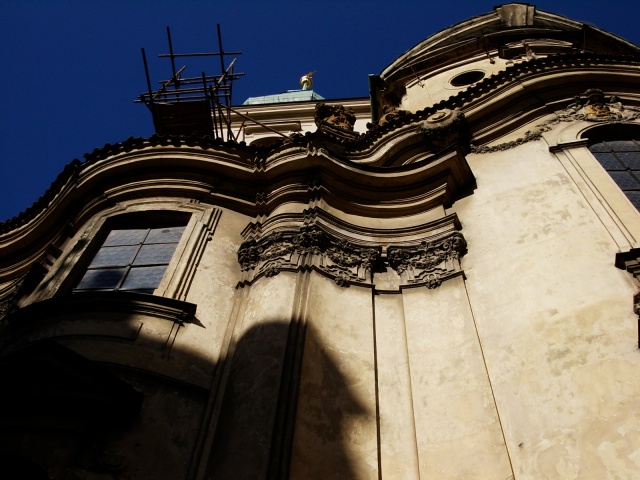 Can anyone identify this church, whose picture I took in Prague back in 2005? Or maybe it is not a church, as, according to Joel, neither is the building atop this post used as such any longer.

This blog was begun in 2009 as a feature of the Providence Journal, where I was on the editorial board and wrote a weekly column of architecture criticism for three decades. Architecture Here and There fights the style wars for classical architecture and against modern architecture, no holds barred. History Press asked me to write and in August 2017 published my first book, "Lost Providence." I am now writing my second book. My freelance writing on architecture and other topics addresses issues of design and culture locally and globally. I am a member of the board of the New England chapter of the Institute of Classical Architecture & Art, which bestowed an Arthur Ross Award on me in 2002. I work from Providence, R.I., where I live with my wife Victoria, my son Billy and our cat Gato. If you would like to employ my writing and editing to improve your work, please email me at my consultancy, dbrussat@gmail.com, or call 401.351.0457. Testimonial: "Your work is so wonderful - you now enter my mind and write what I would have written." - Nikos Salingaros, mathematician at the University of Texas, architectural theorist and author of many books.
View all posts by David Brussat →
This entry was posted in Architects, Architecture Education, Art and design and tagged Andres Duany, Baroque, Joel Pidel, Prague, TradArch, Venice. Bookmark the permalink.

4 Responses to To the TradArch conference!