An experienced Glasgow firm, Page/Park, has been chosen in a competition to restore and renovate the burned masterpiece of Scotland’s great architect Charles Rennie Macintosh – the Glasgow School of Art and its Macintosh Library. The Guardian’s story runs under the headline “Glasgow school to be restored by local firm Page/Park.”

About 90 percent of the building was saved, much more than observers thought at the time, but the library was completely gutted. Fortunately, its construction was extraordinarily well documented, and even more is being learned in the process of analysis required before the rebuilding begins – expected by next April, with completion now estimated for 2018. For example, Page/Park’s David Page explained a recent discovery to Guardian writer Haroon Siddique:

We took a bay of the library and basically examined it for three months in terms of how it was originally made. The fire has revealed things we didn’t know. For example, the columns in the library are made from eight different pieces and they were nailed together. That is something we’d never have anticipated – the idea that you had carpenters from Glasgow, probably working in the shipyards, coming in with hammers and nails. That was quite a discovery. We are going to continue that analysis of how that magical place was constructed, and that allows others to take decisions on how the restoration takes place.

Others? Page sounds like a straightforward guy. I hope he is not giving away too much authority. He’s the one with the experience of working on Macintosh buildings. There has been since the fire a circus sideshow of modern architects and architectural historians expressing the need to bring Macintosh’s designs into the 21st century.

The Guardian piece reads as pretty much a confirmation that the job will be done more as restoration of the GSA and the library to their original design, with new elements primarily intended to incorporate mechanical systems “bolted on” over time, with little thought given to fitting in. There seems to be no hint that any sort of kooky effort will be tolerated to “revise and extend” Macintosh’s “remarks,” as it were.

Very good! Yet my antennae quiver when I read lines like this: “Amid the devastation, while conscious of the need to be faithful to Macintosh’s vision, the school and architects see the renovation as a chance to bring 21st century thinking to the building, which was completed in 1909.” Siddique’s description was followed by the passage regarding the need to upgrade “bolted on” modernizations of technology. Still, I am not perfectly at ease. 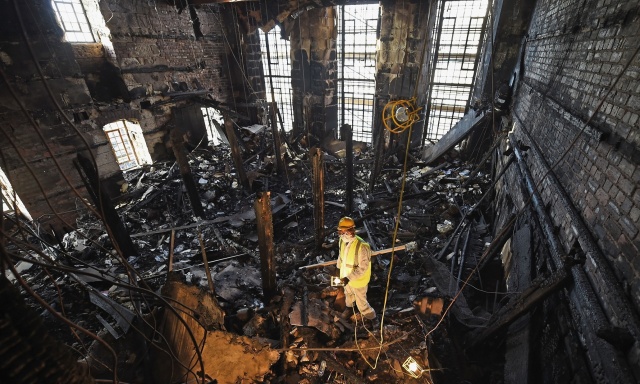 This blog was begun in 2009 as a feature of the Providence Journal, where I was on the editorial board and wrote a weekly column of architecture criticism for three decades. Architecture Here and There fights the style wars for classical architecture and against modern architecture, no holds barred. History Press asked me to write and in August 2017 published my first book, "Lost Providence." I am now writing my second book. My freelance writing on architecture and other topics addresses issues of design and culture locally and globally. I am a member of the board of the New England chapter of the Institute of Classical Architecture & Art, which bestowed an Arthur Ross Award on me in 2002. I work from Providence, R.I., where I live with my wife Victoria, my son Billy and our cat Gato. If you would like to employ my writing and editing to improve your work, please email me at my consultancy, dbrussat@gmail.com, or call 401.351.0457. Testimonial: "Your work is so wonderful - you now enter my mind and write what I would have written." - Nikos Salingaros, mathematician at the University of Texas, architectural theorist and author of many books.
View all posts by David Brussat →
This entry was posted in Architecture, Architecture Education, Architecture History, Other countries and tagged art, Art Nouveau, Charles Rennie Macintosh, Glasgow, Glasgow School of Art, Page/Park, Restoration, Scotland. Bookmark the permalink.