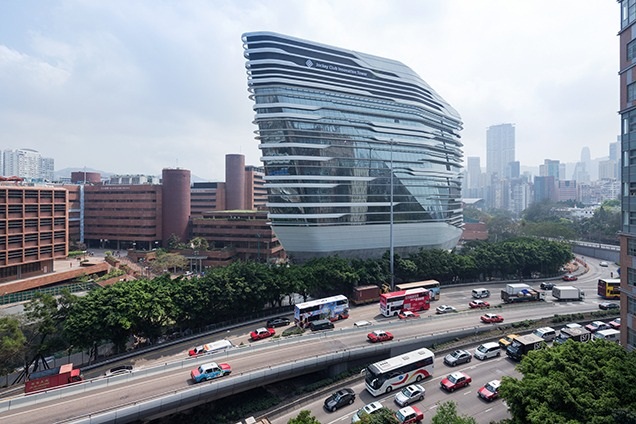 There is almost nothing that I could disagree with or add to in “Empty Gestures: Starchitecture’s Swan Song,” a critique by Peter Buchanan in the Architectural Review. Nothing, that is, except that after so much striking perception, Buchanan does not see, or want to see, the very conclusion his thinking must ineluctably reach. He is a good example of the critics I noted in yesterday’s post who refuse to engage their own intuitive insights.

For example, after complaining that computer programs made it so easy for architects to engage in “formal posturing,” Buchanan writes:

But nobody thought to ask the obvious question as to which of these forms might be relevant to architecture, and not only in terms of functionality, which tolerantly accommodates itself to almost anything. Particularly apt would have been to question which forms elicit relationships − with us humans, both perceptually and psychologically, as well as with other buildings and external space − and so can aggregate into satisfactory urban fabric in which we can feel at home.

The contrast between the diaphanous sails and the lumpy building proper is almost suggestive of butterflies hovering over a turd − You’re right Mr Gehry, much contemporary architecture is shit.

Comparing the Fondation Louis Vuitton with the Biomuseum in Panama reveals the constraints of a more normal budget and emphasises the spectacular extravagance of the Paris building. In the light of current circumstances and the many deserved criticisms already offered, are such buildings really worthy of adulation and declarations of architectural genius? Is some such realisation behind the insecurity that makes Gehry so touchy. Yet in time, and especially with the benefit of an inspired curatorial agenda, the Fondation promises to become a treasured part of Paris − like the Eiffel Tower. But like the latter, is it really architecture or, like the Bilbao Guggenheim, a species of usable sculpture? Architecture, once the encompassing mother of the arts, completed by sculpture and painting, and carrier of cultural significance and meaning, has become reduced to superfluous spectacle.

So after expressing almost every critique of modern architecture that’s come down the pike in half a century, Buchanan allows his piece to devolve into a chucking of mud at Zaha “Ha! Ha!” Hadid and Frank “O!” Gehry. Buchanan seems unaware that Gehry and Hadid consider public dislike of their work as a feather in their cap, a protective attitude Sigfried Giedion long ago urged architecture students to don against criticism of their modernist hooey. Gehry and Zaha are making millions and their work writhes on the covers of all the leading architecture journals. They are gods. They don’t give a hoot what Buchanan thinks!

For Peter Buchanan to recognize modernism’s sins but to chicken out before pinning the tail on the donkey is a crime against honesty, truth and beauty. What does he think the modern movement should do now? He certainly doesn’t suggest it should admit its error and join the classical revival. Perhaps that’s not “to be expected.” And that’s the problem.

This blog was begun in 2009 as a feature of the Providence Journal, where I was on the editorial board and wrote a weekly column of architecture criticism for three decades. Architecture Here and There fights the style wars for classical architecture and against modern architecture, no holds barred. History Press asked me to write and in August 2017 published my first book, "Lost Providence." I am now writing my second book. My freelance writing on architecture and other topics addresses issues of design and culture locally and globally. I am a member of the board of the New England chapter of the Institute of Classical Architecture & Art, which bestowed an Arthur Ross Award on me in 2002. I work from Providence, R.I., where I live with my wife Victoria, my son Billy and our cat Gato. If you would like to employ my writing and editing to improve your work, please email me at my consultancy, dbrussat@gmail.com, or call 401.351.0457. Testimonial: "Your work is so wonderful - you now enter my mind and write what I would have written." - Nikos Salingaros, mathematician at the University of Texas, architectural theorist and author of many books.
View all posts by David Brussat →
This entry was posted in Architects, Architecture, Architecture Education, Architecture History, Development and tagged Architectural Review, Architecture Criticism, Frank Gehry, Peter Buchanan, Zaha Hadid. Bookmark the permalink.

1 Response to Perfect critique, then … pfft!