The faces of buildings. (Ryan Dodgson)

Edges, patterns and shapes affect our perception of the built environment through the millennia worth of knowledge accumulated by our brain about our world. Only 70,000 years from the savannah and, as Ann Sussman put it last night, “your subconscious brain’s already telling you not to go there.” 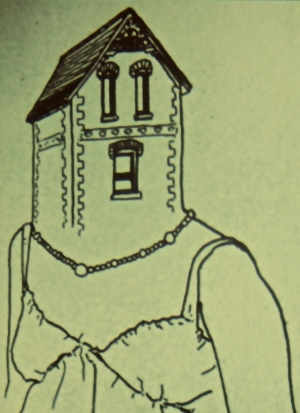 Go where? Boston City Hall. Your brain is raising the alarm to avoid it even before your conscious mind registers its own reluctance. So says Sussman, co-author of Cognitive Architecture, who spoke last night in Boston at an event sponsored by the New England chapter of the Institute of Classical Architecture & Art at the College Club of Boston.

Why Boston City Hall? Because the Brutalist structure – my conscious brain is very reluctant to call it a building – ignores warnings built into our instincts by the natural process of evolution. Boston City Hall might as well have a label attached reading “Not for Human Occupation.” It is grossly lacking in symmetry, scale, detail, facial recognition patterns, and its rough concrete surfaces tend to repel our inclination – called thigmotaxis – to travel close to the edges of places that lack the wealth of ornament and variety of scales that our mind reads as information needed to keep us alive, information that’s hard-wired into our perception of the environment around us, including architecture.

Near City Hall is Hanover Street, a road everyone loves to be on. It is lined with buildings designed by architects who knew all of the above, whether they realized it or not.

Sussman, who wrote her book with Justin Hollander, need not (and does not) point her finger only at Boston City Hall. Most buildings that have gone up since World War II suffer (or make us suffer) from the same deficits. And most people know it. But science, Sussman says, has only recently exposed the neurobiological reasons for this. She does not hesitate to blame modern architecture for its sins. But allow me to go one step further and blame modern architects for ignoring the obvious for most of the century or more during which it has existed – essentially since the human race entered the machine age. Modernist founder Corbusier may have been correct that a house is a “machine for living in,” but he was wrong to think that anybody in touch with his or her inner self would want to live in one of his.

A lot of this ground has been covered by others, including Nikos Salingaros and Michael Mehaffy, whose book Design for a Living Planet I reviewed here. They are writing about research and theories they and others have derived from several decades of scientific exploration. They describe why a healthier architecture and a more sustainable society must strive to copy nature’s organizational patterns, and they reveal the operation of systems based on organized complexity. Sussman and Hollander describe more recent research and experiments and how scientists have drawn hypotheses and theories from what they found in their laboratories. It is fascinating stuff, as Sussman proved in her lecture on Tuesday evening.

After the lecture I dined with Sussman along with Eric Daum, my fellow ICAA chapter board member who had invited her to speak, and Eric Svahn, who still works for the Gund Partnership, an architecture firm where both Sussman and Daum also used to work. We were looking for a restaurant and found one on Boyleston Street. It just so happens that Svahn once worked with another architect, Garry Harley, in an upper floor of the same building. And even more coincidentally, Sussman was scheduled to meet with Harley – who took some of the photographs in her book – the next day (today).

Happenstance plays a role in evolution, but let’s just say that hearing the energetic and entertaining Sussman and reviewing Mehaffy and Salingaros book within the space of a week on the same subject is undeniably coincidental. I do not explain it, I merely report it.

This blog was begun in 2009 as a feature of the Providence Journal, where I was on the editorial board and wrote a weekly column of architecture criticism for three decades. Architecture Here and There fights the style wars for classical architecture and against modern architecture, no holds barred. History Press asked me to write and in August 2017 published my first book, "Lost Providence." I am now writing my second book. My freelance writing on architecture and other topics addresses issues of design and culture locally and globally. I am a member of the board of the New England chapter of the Institute of Classical Architecture & Art, which bestowed an Arthur Ross Award on me in 2002. I work from Providence, R.I., where I live with my wife Victoria, my son Billy and our cat Gato. If you would like to employ my writing and editing to improve your work, please email me at my consultancy, dbrussat@gmail.com, or call 401.351.0457. Testimonial: "Your work is so wonderful - you now enter my mind and write what I would have written." - Nikos Salingaros, mathematician at the University of Texas, architectural theorist and author of many books.
View all posts by David Brussat →
This entry was posted in Architecture, Art and design, Books and Culture, Uncategorized, Urbanism and planning and tagged Ann Sussman, Cognitive Architecture, Design for a Living World, Eric Daum, Eric Svahn, ICAA, Justin Hollander, Mehaffy, Salingaros. Bookmark the permalink.

8 Responses to Edges, shapes and patterns!