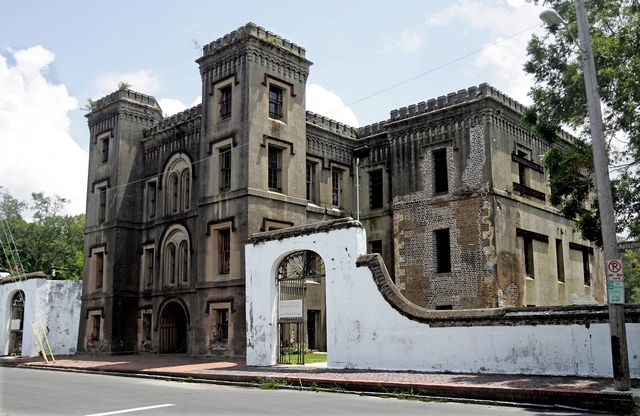 Historic jail from which American College of the Building Arts will soon escape. (Charleston Post and Courier)

The American College of the Building Arts, in Charleston, S.C., has announced it will be moving from an historic jail in that city to an old trolley barn. The ACBA instructs students and pros in the almost lost arts, crafts and techniques that informed the construction of buildings for centuries. These include stoneworking, carpentry, forged architectural ironwork, plaster working, preservation masonry, timber framing and other traditions of long standing. Congats to Patrick Webb and his colleagues at the college for their upcoming move. When an institution devoted to teaching the ways of beauty in the creation of America’s built environment seeks more space, that is damn good news.

Doubts being raised about the modernist establishment of architecture, especially the New York Times’s recent oped by Stephen Bingler and Martin Pedersen, suggest that classical and traditional architecture are on the upswing. Colorado University’s new Institute for Contemporary Traditional Architecture Initiatives at the Denver College of Architecture and Planning is another piece of evidence. Its director, Christine Franck, is beginning to roll out initiatives that will include research on public preferences in architecture. The study will be one of the early initiatives of the institute’s new Center for Advanced Research in Traditional Architecture. Can’t wait!

As Andrès Duany often suggests, however, the effort to recapture territory – almost all architecture programs at the university level are re-education camps designed to inject the modernist cult in young minds – does not progress evenly or inevitably.

For example, the Boston Architecture College last fall threw out its new online classical curriculum before it even got under way, although the courses were full. Developed by Sheldon Kostelecky, a founder of the New England chapter of the Institute of Classical Architecture & Art and now its president, the courses are seeking a sponsor elsewhere. The decision by the BAC to jettison the classical courses was described as part of a financial retrenchment. The BAC’s top leaders had reached out to the chapter in recent years, but given the college’s reluctance several years ago to even host an ICAA exhibit in its lobby, it’s difficult to know the truth. The correlation of forces at the BAC is retrograde.

Still, turmoil in the world of modern architecture, amply described by Justin Shubow, of the National Civic Art Society, in his recent Forbes.com piece on the furor sparked by the NYT oped, suggests that the overall direction of change in the field is positive. However stuck in the mud most architectural education still is, the fact is that more and more people want to learn more about how to design and build the sorts of places that people have always preferred to inhabit. (The link below to Shubow’s article contains links to the NYT article and other sources as well.)

This blog was begun in 2009 as a feature of the Providence Journal, where I was on the editorial board and wrote a weekly column of architecture criticism for three decades. Architecture Here and There fights the style wars for classical architecture and against modern architecture, no holds barred. History Press asked me to write and in August 2017 published my first book, "Lost Providence." I am now writing my second book. My freelance writing on architecture and other topics addresses issues of design and culture locally and globally. I am a member of the board of the New England chapter of the Institute of Classical Architecture & Art, which bestowed an Arthur Ross Award on me in 2002. I work from Providence, R.I., where I live with my wife Victoria, my son Billy and our cat Gato. If you would like to employ my writing and editing to improve your work, please email me at my consultancy, dbrussat@gmail.com, or call 401.351.0457. Testimonial: "Your work is so wonderful - you now enter my mind and write what I would have written." - Nikos Salingaros, mathematician at the University of Texas, architectural theorist and author of many books.
View all posts by David Brussat →
This entry was posted in Architecture, Architecture Education and tagged American College of the Building Arts, Andres Duany, Boston Architectural College, Christine Franck, Contemporary Traditional Architecture Initiatives, ICAA, Patrick Webb, Sheldon Kostelecky. Bookmark the permalink.