House in Norfolk, Va., by Union Studio Architects. Slides courtesy of Donald Powers, from his TBC presentation. Click to enlarge.

[This post is the continuation of my blog’s recent “Trad building conference” thread to No. 5. It may be read in The Providence Journal. Because the Journal online images do not “click to enlarge” I am going to run the full column here, too, so that the text can be read alongside images that can be clicked to enlarge, enabling the captions to be read.]

Is it real or is it Memorex? That question takes center stage in many fields. People seek something between owning a poster of the Mona Lisa and seeing the original in a museum. Is the authenticity of the original more important (even behind plexiglass) than the ability of many people at every level of income to enjoy a high-quality copy? 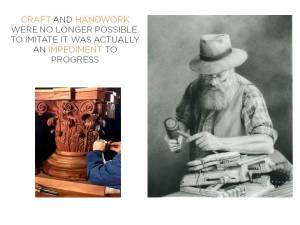 Architecture struggles with the same issues. Is a building made of natural materials such as wood and stone better than one made of “unnatural” materials that mimic wood and stone at a more widely affordable cost?

In a world where modernist practitioners who still dominate the field revel in the unnatural, often skinning their structures in, for 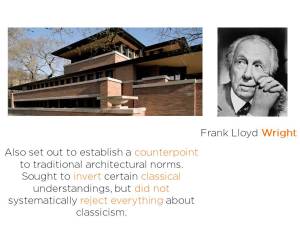 example, titanium, the subject can have an awkward edge. Yet, lest we forget, titanium is on the Periodic Table but granite and marble are not. Elemental, as they say. So Frank Gehry gets to have it both ways.

The question arose in lectures at the recent Traditional Building Conference in Boston. Speakers such as Steve Mouzon, describing “maker spaces” (a sort of incubator for Millennials who make things, not just phone calls), made the pitch for using natural materials on behalf of the environment and sustainability. Gary Brewer, a partner at Robert A.M. Stern Architects, described the work of his firm. He left the impression that it uses only wood or stone for balustrades, etc. Its typically wealthy clients presumably demand no less. I imagine this uncertainty is valuable to RAMSA.

Attendees could examine sponsor booths while awaiting the next lecture. Even there the debate over true or false materials raged. Many sponsors were promoting classical ornament crafted from real materials. As a longtime advocate of any material that can make classical ornament less costly for architects and builders, I took great pleasure in the HB&G Building Products booth. Its balusters and columns of PermaCast look so much like real wood and stone that a shiver of joy ran up my spine.

I own a house whose siding does a great job of trying to look like real wood. Maybe it really does fake out visitors who don’t care whether my house is real or Memorex. Yet I know, and my secret, such as it is, gnaws little by little at the internal structure of my personal authenticity, much like an infestation of termites. I certainly hope this revelation does not taint my value as an advocate of materials that bring classical ornament to the masses. 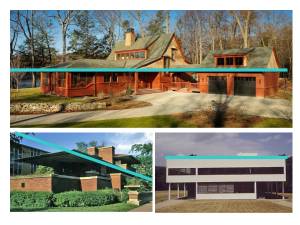 Afterward, I heard Donald Powers, founder of Union Studio Architects in downtown Providence. (He designed the Kennedy Plaza plan that seems to have been “frog-marched” out of the picture in favor of a modernist vision now under way.) His topic, “Traditional Building in a Modern World,” is what most drew me to this year’s third Traditional Building Conference.

Powers introduced us to elements associated 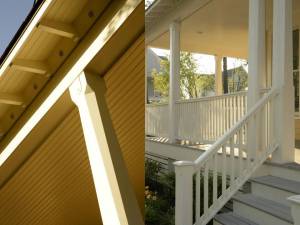 rather than articulated ornament, using “new” rather than natural materials with standardized production techniques rather than individual craftsmanship.

The house above, of Powers’s design, incorporates most of these supposedly modernist elements but looks traditional anyway. Powers squares the circle by pointing out that most of them predate the 1920s, when, he said, “modern” became

“modernism.” Modern is compatible with tradition, because “modern” is just a word meaning today; but in architecture, modernism developed as an opponent of tradition, and cannot be used in “modern classicism,” or new traditional work, without seriously dissing authenticity (not to mention one’s eye).

housing, Powers must use mass-produced columns, balusters and other architectural features that blend structure with ornament, or go out of business, leaving fewer designers able (or willing) to produce affordable beauty.

Natural materials are the ideal. Yet until the natural popularity of traditional architecture is freed by overturning the unnatural modernist bias of the architectural establishment, excellent fakes can help keep the public eye alive to the enchantments of the lost arts of building.

As the crafts regenerate, that day will come sooner because of the Traditional Building Conferences founded by Clem Labine and his lively stable of traditional design magazines.

David Brussat (dbrussat@providencejournal.com) is a member of The Journal’s editorial board.

This blog was begun in 2009 as a feature of the Providence Journal, where I was on the editorial board and wrote a weekly column of architecture criticism for three decades. Architecture Here and There fights the style wars for classical architecture and against modern architecture, no holds barred. History Press asked me to write and in August 2017 published my first book, "Lost Providence." I am now writing my second book. My freelance writing on architecture and other topics addresses issues of design and culture locally and globally. I am a member of the board of the New England chapter of the Institute of Classical Architecture & Art, which bestowed an Arthur Ross Award on me in 2002. I work from Providence, R.I., where I live with my wife Victoria, my son Billy and our cat Gato. If you would like to employ my writing and editing to improve your work, please email me at my consultancy, dbrussat@gmail.com, or call 401.351.0457. Testimonial: "Your work is so wonderful - you now enter my mind and write what I would have written." - Nikos Salingaros, mathematician at the University of Texas, architectural theorist and author of many books.
View all posts by David Brussat →
This entry was posted in Architecture, Architecture Education, Architecture History and tagged Boston, Clem Labine, Donald Powers, Gary Brewer, Steve Mouzon, Traditional Building Conference, Union Studio Architectus. Bookmark the permalink.

3 Responses to Column: Traditional building in a modernist world