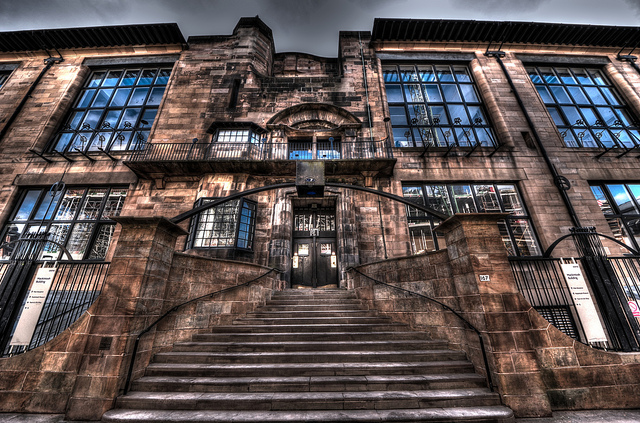 No sadist, I open with an image of the glorious facade of the Mackintosh Building, not with the image that has eaten away at the backside of my last several posts on the fire at the Glasgow School of Art on Friday (and actually in the picture atop my last post). Despite the tragedy of the loss of the Mackintosh Library, most of the building and much of the art work (including the inspired interiors and furniture designed by Charles Rennie Mackintosh) has been saved. Much of the damaged portions, including the Hen Walk, is certain to be restored. Money is already flowing in.

As we look forward to the restoration of the building and its interiors, we can conceivably also undertake a restoration of the reputation of Mackintosh himself. Perhaps a more accurate word would be not a restoration but an intervention: Mackintosh is considered a “precursor” to modernism. His kidnapping by the modernists is said to have been the work of the architectural historian Nikolaus Pevsner, who ignored most of what the architecture of his victims had in common and used their generally minor differences as an excuse to deny their paternity and place them in the modernist foster home, where they are further abused.

Mackintosh is in there with Louis Sullivan and other obvious classicists whose reps have been snatched after their deaths by the hungry maw of modernism. And yet can there possibly be any relation between the Mackintosh Building and the school’s new Reid Building, designed by Steven Holl, which literally devours its nearest neighbor? If there is any relation at all, historically or aesthetically, between the Mack and the Holl, then there is no building on Earth, past, present or future, that is not the ancestor or the descendant of any other building on Earth. Mackintosh was not a precursor to modernism, he was an artist unbound by the canon of classicism. But neither in his writing nor in his work did he reject the past or the traditions from which his work arose. As the Mack is rebuilt, its creator’s legacy must also be rebuilt.

This blog was begun in 2009 as a feature of the Providence Journal, where I was on the editorial board and wrote a weekly column of architecture criticism for three decades. Architecture Here and There fights the style wars for classical architecture and against modern architecture, no holds barred. History Press asked me to write and in August 2017 published my first book, "Lost Providence." I am now writing my second book. My freelance writing on architecture and other topics addresses issues of design and culture locally and globally. I am a member of the board of the New England chapter of the Institute of Classical Architecture & Art, which bestowed an Arthur Ross Award on me in 2002. I work from Providence, R.I., where I live with my wife Victoria, my son Billy and our cat Gato. If you would like to employ my writing and editing to improve your work, please email me at my consultancy, dbrussat@gmail.com, or call 401.351.0457. Testimonial: "Your work is so wonderful - you now enter my mind and write what I would have written." - Nikos Salingaros, mathematician at the University of Texas, architectural theorist and author of many books.
View all posts by David Brussat →
This entry was posted in Architecture, Architecture Education, Architecture History, Art and design and tagged architecture, Charles Rennie Mackintosh, Fire, Glasgow, Nikolaus Pevsner. Bookmark the permalink.