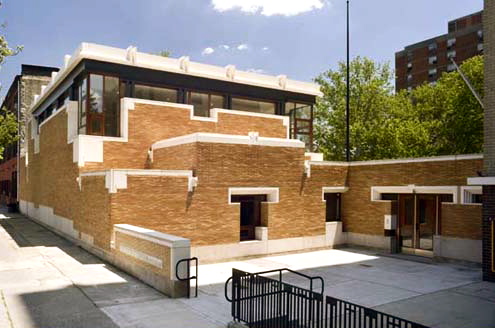 A couple of years ago the world of classical architecture learned that an extraordinarily non-canonical building had won a Stanford White Award from the Institute of Classical Architecture & Art’s headquarters chapter in New York City.

Eyebrows arched. Was this another “break with tradition” like the ICAA’s 2011 conference on postmodern architecture, of all things, or like Michael Graves, of all people, getting another prestigious classical award, the Driehaus, in 2012? Heterodoxy! What was going on?

Then the talk died down and most classicists moved on to other issues.

But a flow of e-mails kept arriving from the New York architect who designed the building, the Saratoga Avenue Community Center, in Brooklyn. It turned out that George Ranalli is also the dean of architecture at the City College of New York, had taught for 20 years at Yale and was a modernist in good standing.

To read the rest of this column, please visit The Providence Journal.

This blog was begun in 2009 as a feature of the Providence Journal, where I was on the editorial board and wrote a weekly column of architecture criticism for three decades. Architecture Here and There fights the style wars for classical architecture and against modern architecture, no holds barred. History Press asked me to write and in August 2017 published my first book, "Lost Providence." I am now writing my second book. My freelance writing on architecture and other topics addresses issues of design and culture locally and globally. I am a member of the board of the New England chapter of the Institute of Classical Architecture & Art, which bestowed an Arthur Ross Award on me in 2002. I work from Providence, R.I., where I live with my wife Victoria, my son Billy and our cat Gato. If you would like to employ my writing and editing to improve your work, please email me at my consultancy, dbrussat@gmail.com, or call 401.351.0457. Testimonial: "Your work is so wonderful - you now enter my mind and write what I would have written." - Nikos Salingaros, mathematician at the University of Texas, architectural theorist and author of many books.
View all posts by David Brussat →
This entry was posted in Architecture, Architecture Education, Urbanism and planning and tagged architecture, Brooklyn, George Ranalli, Saratoga Avenue Community Center. Bookmark the permalink.