Two to watch in Providence 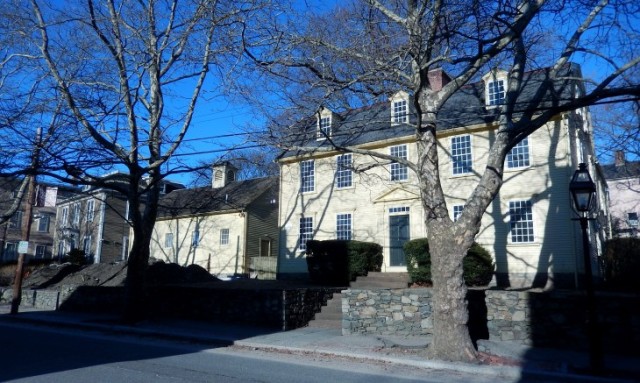 The Joseph Jenckes House, 43 Benefit St., today, with digging in front of its barn at left.

While some people in Providence are upset that the owner of a big house at 200 Hope Street, by Russell Warren, across from the Wheeler School, is to be broken up into apartments, and with no intent to alter the exterior, two projects of more concern, I think, may be passing under the radar.

First is the digging up of a front lawn at 43 Benefit St., which is the Joseph Jenckes House, completed in 1773 or ’74. A friend called up to warn me about it last week. I drove by and sure enough, the digging was clearly more intense than a (pre-seasonal) resodding of grass. Today I got the meeting agenda for the Providence Historic District Commission, and there, Item 3, was “Case 14.018, 4 Jenckes Street, vacant lot (College Hill): The applicant is requesting the new construction of a single family residence with attached garage.” I’m not sure why the discrepancy between the two addresses. That is a rare and cherished extent of street-facing lawn whose demolition (a sort of reverse demo) will probably not sit well with many. Pending some idea of what the owner – Frank Scotti, at least, on the sign in front – wants to build, my opinion is mixed, but mostly skeptical.

Then there is Item 2, Case 14.013, 586 Atwells Avenue, General Electric Base Plant, c. 1910. This, unlike some utilitarian structures whose demolition has raised concern around here in recent years, is an elegant old mill of exactly the sort, and in exactly the sort of location, that would be great for artist lofts (and not just artists, either). This seems to be exactly what the city wants to save. In fact, it is already a famous place: The architectural historian Henry-Russell Hitchcock (friend of Philip Johnson) wrote a book called Rhode Island Architecture in 1939 in which this mill was the second last in its collection of photographs. The caption reads: “Low, cleanly composed brick plant of the post-War type but not of the latest design.” Ironic phraseology for a photo shot in 1939, ja?

This blog was begun in 2009 as a feature of the Providence Journal, where I was on the editorial board and wrote a weekly column of architecture criticism for three decades. Architecture Here and There fights the style wars for classical architecture and against modern architecture, no holds barred. History Press asked me to write and in August 2017 published my first book, "Lost Providence." I am now writing my second book. My freelance writing on architecture and other topics addresses issues of design and culture locally and globally. I am a member of the board of the New England chapter of the Institute of Classical Architecture & Art, which bestowed an Arthur Ross Award on me in 2002. I work from Providence, R.I., where I live with my wife Victoria, my son Billy and our cat Gato. If you would like to employ my writing and editing to improve your work, please email me at my consultancy, dbrussat@gmail.com, or call 401.351.0457. Testimonial: "Your work is so wonderful - you now enter my mind and write what I would have written." - Nikos Salingaros, mathematician at the University of Texas, architectural theorist and author of many books.
View all posts by David Brussat →
This entry was posted in Architecture, Architecture History, Books and Culture, Preservation, Providence and tagged architecture, Benefit Street, David Brussat, Preservation, Providence, Providence Historic District Commission, Russell Warren. Bookmark the permalink.