Among the most charming and beloved buildings in Cambridge is the old Lampoon Building (Lampoon Castle), where Harvard’s famous yuk-yuk club, the Harvard Lampoon, graduated, years ago, the founders of National Lampoon magazine. The building, designed by Edmund Wheelwright, a relation of one of the original Lampoon’s founders, opened in 1909. Its newspaper mocked everything and was, much like Jonathan Stewart’s The Daily Show today, the source of news for many young Americans. That may be a joke, too, but for our purposes it is neither here nor there. (But first let me add that in the photo at left, it is smoking one of those e-cigarettes. Naughty, naughty!)

The National Lampoon Building is a good example of the wit of classical architecture. But as with every building worthy of being called a building, let alone architecture, there is a serious side of the Lampoon. It was listed No. 5 on a list of ridiculously phallic buildings. (Oops, that sentence would be better off elsewhere.) 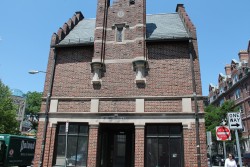 Before work by Hammersmith.

Time may have aged it gracefully, but time also plays tricks, and the Lampoon Building needed a stay in the hospital. It hired the Boston firm of Albert, Righter & Tittmann for the work, and ART hired Hammersmith Studios, the forge run by Susan and Carl Close, who until recently were my fellow board members of the Institute of Classical Architecture & Art’s New England chapter.

After work by Hammersmith.

Susan has sent me news of their work in modifying the building to create another exit, which included work on the railing of the balcony of the Lampoon. The picture on top is of one of the open-book cartouches on its balustrade. Part of the job required fabricating the cartouche, which is an ornament designed to bear an inscription.

A book makes a fairly witty cartouche, an architectural use, you might say, of litotes – a term in rhetoric that means emphasizing something by understating it. For example, a lovely woman might be referred to as “not unattractive.” This is something that might be considered a species of jargon by the inhabitants of the castle. Humor requires knowledge, hence the book. Here is Susan’s description:

Obviously, as you can tell from the top photograph, the result of the work below lends a sort of impish natural grace to the balustrade.

Part of the process of creating the Lampoon cartouche.

This blog was begun in 2009 as a feature of the Providence Journal, where I was on the editorial board and wrote a weekly column of architecture criticism for three decades. Architecture Here and There fights the style wars for classical architecture and against modern architecture, no holds barred. History Press asked me to write and in August 2017 published my first book, "Lost Providence." I am now writing my second book. My freelance writing on architecture and other topics addresses issues of design and culture locally and globally. I am a member of the board of the New England chapter of the Institute of Classical Architecture & Art, which bestowed an Arthur Ross Award on me in 2002. I work from Providence, R.I., where I live with my wife Victoria, my son Billy and our cat Gato. If you would like to employ my writing and editing to improve your work, please email me at my consultancy, dbrussat@gmail.com, or call 401.351.0457. Testimonial: "Your work is so wonderful - you now enter my mind and write what I would have written." - Nikos Salingaros, mathematician at the University of Texas, architectural theorist and author of many books.
View all posts by David Brussat →
This entry was posted in Architecture, Architecture Education, Architecture History, Art and design, Humor, Preservation and tagged Albert Righter & Tittmann, Architecture Here and There, Cambridge, David Brussat, Hammersmith Studios, Harvard, Harvard Lampoon, Lampoon Castle, MA, National Lampoon, Susan Close. Bookmark the permalink.

2 Responses to No lampooning Lampoon Castle