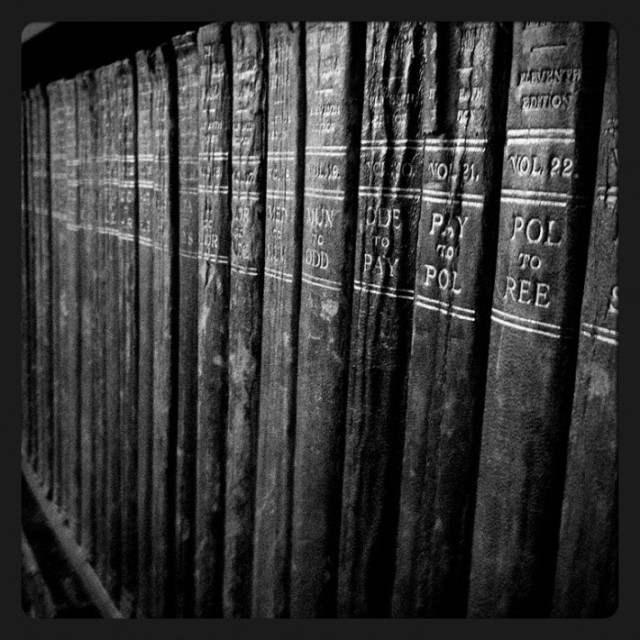 An early edition of the 11th Edition. (Wikipedia)

I dragged out my 11th edition of the Encyclopedia Britannica. My edition is actually the 12th edition, which is the 11th plus an appendix updating, in 1922, various important subjects, many of which had seen their articles in the famous (and infamous) 11th rendered moot by the intervention of the war to end all wars. The entire article, by the way, is 102,187 words long.

Here is the conclusion of the final section of the 11th edition’s article, which is quaintly entitled “Modern Architecture”:

In summing up the present position of modern architecture, it may be said that architecture is now a more cosmopolitan art than it has been at any previous period. The separate development of a national style has become in the present day almost an impossibility. Increased means of communication have brought all civilized nations into close touch with each other’s tastes and ideas, with the natural consequence that the treatment of a special class of building in any one country will not differ very materially from its treatment in another; though there are nuances of local taste in detail, in manner of execution, in the materials used. And the civilized countries have almost with one consent returned, in the main, to the adoption of a school of architecture based on classic types. The taste for medievalism is dying out even in Great Britain, which has been its chief stronghold.

What course the future of modern architecture will take it is not easy to prophesy. What is quite certain is that it is now an individual art, each important building being the production, not of an unconsciously pursued national style, but of a personal designer. As far as there is a ruling consensus in architectural taste, this will tend to become, like dress and manners, more and more cosmopolitan; and it seems probable that it will be based more or less on the types left us by Classic and Renaissance architecture. There are, however, two influences which may have a definite effect on the architecture of the near future. One of these is the possible greater rapprochement between architecture and engineering, of which there are already some signs to be seen; architects will learn more of the kind of structural problems which are now almost the exclusive province of the engineer, and there will be a demand that engineering works shall be treated, as they well may be, with some of the refinement and expression of architecture. The other influence lies in the closer connexion, which is already taking place, between architecture and the allied arts, so that an important building will be regarded and treated as a field for the application of decorative sculpture and painting of the highest class, and as being incomplete without these. It is in this closer union of architecture with the other arts that there lies the best hope for the architecture of the future.

Eyes wide shut, I’m afraid! But this was two years before Adolf Loos wrote Ornament and Crime. Here is the conclusion from the 12th (1922) edition’s article on architecture:

The conclusion that must be drawn from a survey of architecture in the United States during the 20th century is that the great regeneration initiated during the eighties of the 19th century went steadily forward until architecture became almost a vital interest to a general public that demanded the best that the profession could give. American architects had an advantage over European in the large demand for their services. Good architecture became the fashion, and this was due largely to three factors: the influence of the American Institute of Architects, the training of the Ecole des Beaux Arts, and the dozen or more great schools of architecture in different parts of the country. Behind this, however, lay the fact that apparently American architects as a whole were drawn from the class that possessed the finest traditions and the soundest standards, and that they were able by sheer force of character and excellence of attainment to impose on the public their own ideals and their own standards of value. The World War was an interlude of non-production, but not, apparently, of non-development, and by 1920 a recovery was being effected, while there was evidently an unfailing supply of young practitioners to carry on the movement that had already achieved such notable results.

This sounds more like a press release from the AIA, but you’d think there would have been storm clouds visible on the horizon. You would not think these were attitudes, so strongly and even obnoxiously asserted, that would surrender to nonsense over the next twenty years. Oh well.

But I suppose the silver lining in the dark cloud is that change can come as suddenly (from a historical standpoint) today as it did then, although the techniques available to modernists to “impose on the public” are more sophisticated nowadays.

This blog was begun in 2009 as a feature of the Providence Journal, where I was on the editorial board and wrote a weekly column of architecture criticism for three decades. Architecture Here and There fights the style wars for classical architecture and against modern architecture, no holds barred. History Press asked me to write and in August 2017 published my first book, "Lost Providence." I am now writing my second book. My freelance writing on architecture and other topics addresses issues of design and culture locally and globally. I am a member of the board of the New England chapter of the Institute of Classical Architecture & Art, which bestowed an Arthur Ross Award on me in 2002. I work from Providence, R.I., where I live with my wife Victoria, my son Billy and our cat Gato. If you would like to employ my writing and editing to improve your work, please email me at my consultancy, dbrussat@gmail.com, or call 401.351.0457. Testimonial: "Your work is so wonderful - you now enter my mind and write what I would have written." - Nikos Salingaros, mathematician at the University of Texas, architectural theorist and author of many books.
View all posts by David Brussat →
This entry was posted in Architecture, Architecture Education, Architecture History, Books and Culture and tagged architecture, Architecture Here and There, classical architecture, David Brussat, Encyclopedia Britannica, History, Modern Architecture, Renaissance, World War I. Bookmark the permalink.

2 Responses to Britannica on architecture, c. 1911