Field of wheat creates a landscape of beauty. (nature-hdwallpapers.com)

It occurs to me that in my longstanding effort to demonize modern architecture that I could stand to remind readers that it qualifies as the architectural equivalent of genetically modified organisms – GMO architecture. I wrote of the term several years ago after appearing on a local radio show. I imagined, at the time, that I had coined the phrase myself, and maybe I did (but probably not); still, I gave credit to the young lady who appeared before me on the show for the inspiration. I am remiss in not having returned to the phrase in my subsequent writing, whoever deserves credit for coinership (a word I’m sure I did not coin). Yesterday, my son Billy, who is 13, used the acronym GMO, correctly identifying the third initial before I did, and it brought this post to mind, which I reprint below, from my blog on June 21, 2015.

Yesterday evening I had the pleasure of appearing on WPRO’s Coalition Radio with Pat Ford and David Fisher (6 p.m. Saturdays, 630 AM and 99.5 FM). I was preceded on the air by Elizabeth Guardia of Right to Know RI, which supports legislation in the Rhode Island General Assembly to require labeling of GMO foods in this state. As Elizabeth and her associates filed out of the studio, I had the most alarming epiphany: 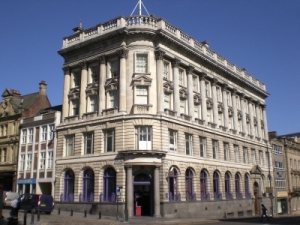 GMOs are foods produced by manipulating the gene content of agricultural products. The acronym stands for genetically modified organisms. Instead of mating cows that produce more milk or corn that resists bugs better, as has been done for centuries, strains of corn or cattle feed that accomplish those goals are produced in a laboratory by manipulating genetic material. GMO opponents think people have a right to know whether food they buy at their groceries was produced using this process. The big fear is that the practice, and research into its safety, has not gone on long enough to ascertain whether it carries hidden dangers.

Likewise, as I pointed out yesterday for the listening audience, modern architecture turns centuries of design practice on its head. Modern architects pride themselves on the novelty of their designs. They ignore best practices evolved over generations to produce the safest, most useful and most attractive buildings. They specialize in, and indeed revel in, the untried and (reluctant as they’d be to admit it) the untrue.

But what scientists are learning is that human neurobiological traits that hark back to our evolutionary survival of the fittest are embedded in traditional architecture. Ornament in particular reflects the information that early humans gathered from their environment to detect, often by instinct, threats ranging from poison in vegetation to tigers in trees. We do not need that sort of information today, but our brains still crave it. Architecture without embellishment literally makes us uneasy, according to such theorists as Nikos Salingaros, a mathematician at the University of Texas in San Antonio. (Full disclosure: I am editing his latest book on the biophilic healing properties in architecture.)

Over a quarter of a century I have blazed new trails in the art of demonizing modern architecture. In recent years, science has become a major ally in that endeavor. So I thank Right to Know RI and Coaltion Radio at WPRO for identifying another arrow for my rhetorical quiver.

Here are links to WPRO. The third link takes you to the Coalition website where you can click on Coalition #74 and hear my rant beginning at 34:00 minutes into the show:

This blog was begun in 2009 as a feature of the Providence Journal, where I was on the editorial board and wrote a weekly column of architecture criticism for three decades. Architecture Here and There fights the style wars for classical architecture and against modern architecture, no holds barred. History Press asked me to write and in August 2017 published my first book, "Lost Providence." I am now writing my second book. My freelance writing on architecture and other topics addresses issues of design and culture locally and globally. I am a member of the board of the New England chapter of the Institute of Classical Architecture & Art, which bestowed an Arthur Ross Award on me in 2002. I work from Providence, R.I., where I live with my wife Victoria, my son Billy and our cat Gato. If you would like to employ my writing and editing to improve your work, please email me at my consultancy, dbrussat@gmail.com, or call 401.351.0457. Testimonial: "Your work is so wonderful - you now enter my mind and write what I would have written." - Nikos Salingaros, mathematician at the University of Texas, architectural theorist and author of many books.
View all posts by David Brussat →
This entry was posted in Architecture, Blast from past and tagged David Fisher, Elizabeth Guardia, Genetically Modified Organism, Modern Architecture, Nikos Salingaros, Pat Ford, WPRO. Bookmark the permalink.