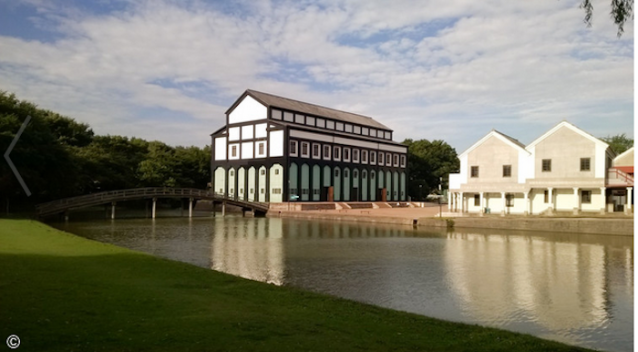 Buildings designed and built by Christopher Alexander and associates at the campus of Eishin University, near Tokyo. (Photo by Sophie Elizabeth Alexander)

The great architectural and computer design theorist Christopher Alexander, born in Vienna and of British and American citizenship, died at his home in Binsted, Sussex, U.K. this past week after a long illness. He was 85. His more than 200 works of architecture were deeply natural, springing from the order and processes of nature that were the study of his lifetime.

His books, primarily Notes on the Synthesis of Form (1964), A Pattern Language 1977), The Timeless Way of Building (1979), A New Theory of Urban Design (1987), and his four-volume The Nature of Order (2002-04), to name a few, show his interest in systems, natural and manmade. He felt that systems that do a better job replicating those of nature work best and could most easily be made both useful and beautiful in architecture and urbanism.

Wikipedia quotes this seminal passage from The Timeless Way of Building:

There is one timeless way of building. It is a thousand years old, and the same today as it has ever been. The great traditional buildings of the past, the villages and tents and temples in which man feels at home, have always been made by people who were very close to the center of this way. It is not possible to make great buildings, or great towns, beautiful places, places where you feel yourself, places where you feel alive, except by following this way. And, as you will see, this way will lead anyone who looks for it to buildings which are themselves as ancient in their form, as the trees and hills, and as our faces are.

He was a key figure in the New Urbanist movement – basically the old urbanism that was replaced by the sprawl criticized by Alexander in his article “A City Is Not a Tree” (1965). What many admirers don’t realize is the centrality of his ideas on order in the development of computer programming and software design. Noting Alexander’s passing, software strategist Ryan Singer wrote of his perhaps even more profound legacy (in today’s world) that “A Pattern Language inspired a generation of influential software programmers who created working methods and wrote widely-read books using Alexander’s theory of patterns.”

Alexander’s ideas in A Pattern Language led directly to the development of “wiki” design and the Wikipedia phenomenon. They may seem to be in separate and even distant fields from architecture but are in reality closely tied. Computer technology did not really take off until its systems theorists (including Alexander) discovered how software replicates nature’s generative processes. Research by the mathematician Nikos Salingaros, who has worked closely with Alexander for decades, has disclosed major similarities between neurobiological processes and the human brain’s instinctive preference for traditional building and city designs that seem to reproduce according to the same patterns as plant and animal life.

Business and data architect Richard Veryard notes that “it is possible that some software practitioners understood his work better than most architects.” That may be the understatement of the week. In fact, it is fair to say that computer theorists have been much quicker than have architects or planners to embrace the connection between the living and the manmade. It is more than fair to say that modernist architects, most of whom tend to disdain Alexander’s work, are not advocates of what he called “living architecture.”

Another colleague of Alexander’s was the urban theorist Michael Mehaffy, who today wrote:

There is a narrative within the modern architectural establishment that Alexander started out as “one of us” – a hard-nosed modern theorist – but then drifted into something gauzy and mystical. Actually this is not true at all; if you study the man’s work as I have, you will see a straight line from the very beginning to the end. It was always about mereology, about part-whole relations. It may have taken him to some surprising places, but that was only because of the evidence he found – not his own whims.

Anyone who achieves Alexandrian levels of cogitation probably tries to reach above their own pay grade, let alone that of most who are reading this obituary, including its author. Alexander’s concepts of architecture and design reflect and entwine with the concept of life itself, and beyond. Salingaros sent me a blurb from Eric Buck, in the philosophy department of the University of Kentucky, from his blurb on the jacket cover of the fourth volume of Alexander’s The Nature of Order, The Luminous Ground, which he described as “one of Christopher’s favorite quotes”:

I believe Alexander is likely to be remembered most of all, in the end, for having produced the first credible proof of the existence of God.”

God is in the details, as someone has noted. Salingaros adds: “Architecture today is situated so far away from life and metaphysics that it will not know what to make of this.” It may be hoped that Alexander knew what to make of this, and that his readers, students, architects and many others will bring that knowledge to their work long after the passage of Christopher Alexander. That will certainly make the world a more beautiful place. R.I.P.

Reprinting the rest of Mehaffy’s quotation that followed from the one above is irresistible:

In fact there’s a great story about how Alexander earned his scholarship studying math and physics at Cambridge. He was required to reproduce a famous electromagnetic experiment, and he kept getting the wrong result. All the other candidates, knowing the right answer from the textbooks, fudged their results to match – but not Alexander. It turned out that a strong electromagnet one floor below was skewing the result, and Alexander alone was observing the reality, not the preconception. On that basis, he was awarded the scholarship. From that moment on, he later said, he decided never to trust the conventional narrative, but only what he himself observed. So he did – and on the evidence, the results were incredibly useful.

This blog was begun in 2009 as a feature of the Providence Journal, where I was on the editorial board and wrote a weekly column of architecture criticism for three decades. Architecture Here and There fights the style wars for classical architecture and against modern architecture, no holds barred. History Press asked me to write and in August 2017 published my first book, "Lost Providence." I am now writing my second book. My freelance writing on architecture and other topics addresses issues of design and culture locally and globally. I am a member of the board of the New England chapter of the Institute of Classical Architecture & Art, which bestowed an Arthur Ross Award on me in 2002. I work from Providence, R.I., where I live with my wife Victoria, my son Billy and our cat Gato. If you would like to employ my writing and editing to improve your work, please email me at my consultancy, dbrussat@gmail.com, or call 401.351.0457. Testimonial: "Your work is so wonderful - you now enter my mind and write what I would have written." - Nikos Salingaros, mathematician at the University of Texas, architectural theorist and author of many books.
View all posts by David Brussat →
This entry was posted in Architecture and tagged A Pattern Language, Christopher Alexander, Computer Programming, Eric Buck, New Urbanism, Nikos Salingaros, Obituary, Richard Veryard, Software, The Nature of Order, The Timeless Way of Building, Wikipedia. Bookmark the permalink.