Save a Providence water view 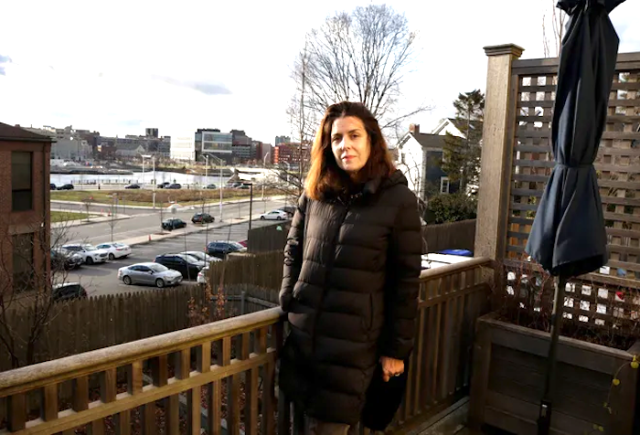 Tayo Heuser and the deck in back of her Benefit Street “home.” (Kris Craig/Providence Journal)

It may be too late to do anything for poor Tayo Heuser and Jeff Shore, according to Amy Russo’s story in the Providence Journal, “Neighbors scramble to soften impact of waterfront apartments.” They bought a “home” on Benefit Street seven years ago, and built a deck from which to enjoy their “picture-perfect view of the Providence River.” In a “twist of fate,” they they will probably soon be looking out, instead, at the rear end of a building filled with apartments.

One of three proposals for that building will be chosen on Wednesday. The Parent and Diamond proposal sears the eye considerably less than the other two along its river frontage, but all three are arguably just as godawful from the rear, which would face the Heuser’s and Shore’s deck.

I suppose they’ll have to learn to take more satisfaction from the “fossils, artifacts and paintings” that fill their home, as Russo describes it. Or maybe they will have to better appreciate the rear of the Laborers’ International Union headquarters that already blocks the southerly portion of their view. It encroaches from the left in the photo above by the Journal’s Kris Craig. To see the river, Heuser and Shore must angle their gaze to the northwest from their deck.

What dominates the view is the laborers’ parking lot on South Main Street. Yes, you can see the river, but you are also forced to see the buildings across the river for which the I-195 Redevelopment District Commission is responsible.

The predicament faced by Heuser and Shore brings into focus the reasons why their concerns should be front and center for the commissioners. Heuser and Shore have no right to a water view, but the commissioners have an obligation to promote good architecture, or no architecture if developers offer nothing that qualifies as good – and good means beauty that strengthens rather than weakens the city’s brand of historical character. A view of architecture good enough to at least compensate for the loss of a waterfront view is what the commission owes to Heuser and Shore. If that cannot be achieved, the land should remain vacant until it can be achieved, city taxes be damned.

So, yes, the fine grain of architectural design should be uppermost in the design judgments of the commission. God may be in the details, but details are central to the commission’s understanding of what a community needs from developers and architects – an understanding that clearly eludes this commission and the specialists who appear before it.

The view at issue is a pathetic hodge-podge of quasi-modernist structures. This did not have to be. For years, I have urged the commission to promote, for this district, buildings that would reflect Providence’s historical character – that is, buildings erected on smaller parcels that would break up the size and footprint of buildings and foster design with traditional forms and materials that might better reflect (on the west side of the river) the Jewelry District’s historic architecture and (on the east side of the river) the areas of Benefit Street, College Hill and Fox Point that Heuser and Shore must have found alluring when they were looking for someplace to live.

The commission has seen fit to do none of this, and as a result the banks of the Providence River between the new Crawford Street Bridge to the north and the Point Street Bridge to the south are an unholy horror. The only proposal I have seen that might have fit in the Innovation District was the Carpionato Properties development plan of 2013, Its pair of large parcels were not subdivided, but they hosted many small and elegant buildings. For some reason the proposal did not pass muster with the commission and so it disappeared into the mists of recent history. (See illustration below.)

I feel sorry for people who have recently moved into the Benefit Street neighborhood. Perhaps they thought that this city, whose past is so clearly a model upon which to build its future, might adopt development policies that would protect and extend its built heritage. Not to mention residents with even longer tenure in the neighborhood. How could they imagine, after the excellent River Relocation Project of 1990-1996 that created a new, beautiful, traditional downtown waterfront, that the city would instead imitate most American cities, knuckling under to the profane demand, among “professionals,” for architecture that rejects the past and condemns us all to a purposely ugly future.

As the only architecture critic in Providence, and one of the few (if any) around the nation, who tries to follow and review vital projects through their stages of development from a classical design viewpoint, I share blame – for not nagging and blasting the city’s various design commissions (the so-called “experts”) with sufficiently harrowing curses. 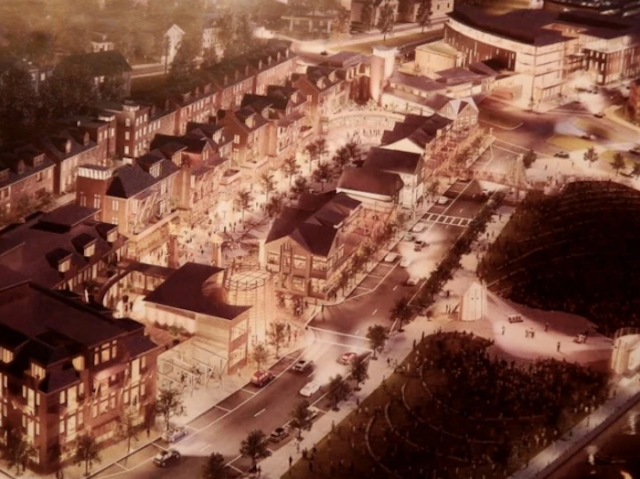 This blog was begun in 2009 as a feature of the Providence Journal, where I was on the editorial board and wrote a weekly column of architecture criticism for three decades. Architecture Here and There fights the style wars for classical architecture and against modern architecture, no holds barred. History Press asked me to write and in August 2017 published my first book, "Lost Providence." I am now writing my second book. My freelance writing on architecture and other topics addresses issues of design and culture locally and globally. I am a member of the board of the New England chapter of the Institute of Classical Architecture & Art, which bestowed an Arthur Ross Award on me in 2002. I work from Providence, R.I., where I live with my wife Victoria, my son Billy and our cat Gato. If you would like to employ my writing and editing to improve your work, please email me at my consultancy, dbrussat@gmail.com, or call 401.351.0457. Testimonial: "Your work is so wonderful - you now enter my mind and write what I would have written." - Nikos Salingaros, mathematician at the University of Texas, architectural theorist and author of many books.
View all posts by David Brussat →
This entry was posted in Architecture and tagged Amy Russo, Carpionato, I-195 Redevelopment District Commission, Kris Craig, Parent & Diamond, Providence Journal, Providence RI, Providence River, River Relocation. Bookmark the permalink.

1 Response to Save a Providence water view