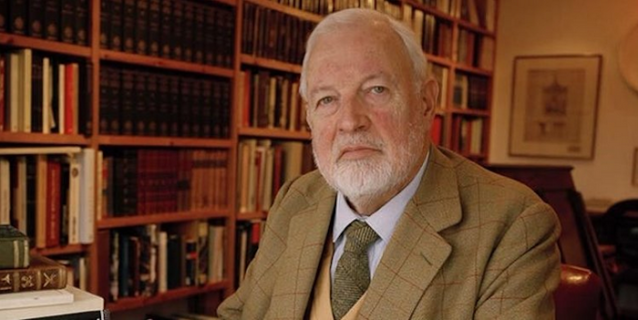 Three years have passed since British architectural historian James Stevens Curl’s masterful Making Dystopia was published by Oxford University Press. Subtitled “The Strange Rise and Survival of Architectural Barbarism,” the book can only have been about modern architecture, perhaps the most curious and indeed outrageous phenomenon of our time.

Writing in The Critic a few months ago, the mathematician and architectural theorist Nikos Salingaros described the book this way:

Curl’s critique of the theory and practice of modernism demolished the economical-ethical-political arguments put forward for decades that justified forcing people to live in inhuman environments. It was all a power-play, to drive humane architecture and its practitioners into the ground so that a new group of not very competent architects and academics could take over.

Stevens Curl in his book describes the result this way:

A great language capable of infinite variety of expression, a mighty and expansive vocabulary, a vast resource based on two and a half millennia or more of civilization, was superseded by a series of monosyllabic grunts, foisted on the populace with a totalitarian disregard for the opinions of those who had not been drilled to conform.

No wonder Stevens Curl won the 2019 Arthur Ross award for history and writing, bestowed by the New York chapter (and national headquarters) of the Institute of Classical Architecture & Art.

Has Making Dystopia diminished the unwarrantedly high status of modernist architecture over those years? Undoubtedly it has. Salingaros asked himself the same question in “Still Making Dystopia” and sadly concluded that evidence for the book’s impact on modernism must be considered elusive.

I once predicted in my review of the book on Amazon that if Dystopia got the attention it deserved,

it will start a revolution in the way we shape our built environment, and the result will be as vital as the discovery by mankind that the natural environment is in equal peril. It will rank with civilization’s victories in defeating totalitarianism and bringing democracy to Germany and Japan after WWII, and to Eastern Europe after the defeat of the Soviet Union in the Cold War. Some will dismiss that, but the eradication of beauty from the intensely visual field of architecture – the queen of the arts – which we all must experience every day and have done so since childhood, has had a major saddening effect on the world, and its reversal will bring about an efflorescence of happiness. It’s possible that James Stevens Curl’s book will launch that revolution.

It is still possible, but it has not happened yet. As Salingaros points out, the architectural establishment has savaged the book, and it has not been read or commented on by elite practitioners in the field, who have ignored it.

This is not unexpected. In our day and age, miseducated elites regularly ram poorly conceived policies down the throats of their supposed beneficiaries. Not only in architecture is this true, and in architectural education, but it’s true in education at all levels, K-Ph.D. It’s true in law enforcement from local police up to federal agencies – the FBI, the CIA, the Pentagon – charged with protecting the public and the nation. It’s true in science, health, in so many fields: wherever false narratives prevail, with the legacy media running interference for one side only in debates over facts and truth, local, state, national and international. But as Stevens Curl’s book strongly suggests, this state of affairs has prevailed in architecture since the 1920s, longer than in any other field.

Still, the book has been a godsend to those who practice architecture and city building as it was practiced for hundreds, even thousands of years. But even if such a positive emotional impact has been widely felt, evidence of it would be hard to find. Even if there were a measurable uptick in architectural practitioners citing Stevens Curl’s book, or design critics giving more credence to tradition or denouncing modernism more harshly after reading it, or municipalities leveling unequal playing fields that face traditional practitioners seeking commissions in cities and towns, it would still be impossible to count all the citations, even on the internet, or to develop a detailed ennumeration of the lies, disinformation, coverups, and sheer bad faith and brutality of the current establishment.

“What is missing from much debate about architecture today,” writes Stevens Curl toward the end of Dystopia (page 333),

is empathy, respect for culture in the widest sense, understanding of history (including religion), recognition of the imperative of nature as part of humankind’s habitat, and understanding of the importance of expressions of gravity and stability in building design to induce calm and ease in those who have to live with the realized works of an architecture that denies gravity, that deliberately sets out to disturb, and that only respects itself.

Hard facts characterize this scholarly volume of 388 pages, not including 75 pages of notes, 43 of bibliography, 40 of index, and many photographs and drawings, including some by the author. Along with numerous books on mostly architectural subjects, Stevens Curl also wrote (with Susan Wilson) the Oxford Dictionary of Architecture, with many wry comments in modernist entries.

And yet insurrection against evil can begin at the bottom and, when successful, bring change to the top. Immeasurables such as the influence of a powerful book, one that indicts a corrupt regime, can spark revolution. It has happened many times before, in every realm of society, across time and across the globe. It is happening today in the food industry, to name just one with which many are familiar. It may be just starting to happen in the field of education, and it sure can happen in architecture. But architecture is more tightly nailed down by its establishment than any other field, and will require sparks to be set by people at the bottom, as it were: in local neighborhoods where architects and developers are most vulnerable to direct action.

I will give one example, a woman in Providence who has probably not read Making Dystopia but has led opposition to modernist house proposals being forced into a historic neighborhood. Lily Bogossian led locals on a charge into the belly of the beast, battled smart and tough, emerged victorious, and is about to do it again, taking on a new set of developers and purveyors of ugliness aiming to crush the spirit of a beautiful city and a free society. Good for her. I urge her, if she has not, to read Making Dystopia. If beauty is to regain the upper hand here and around the world, her like must become legion.

When dissatisfaction strongly felt by the public wells up into revolt, the elites do not realize it until too late. Either this will happen someday, or it will not. But if it happens, it probably would not have happened without the powerful impetus of James Stevens Curl’s Making Dystopia.

This blog was begun in 2009 as a feature of the Providence Journal, where I was on the editorial board and wrote a weekly column of architecture criticism for three decades. Architecture Here and There fights the style wars for classical architecture and against modern architecture, no holds barred. History Press asked me to write and in August 2017 published my first book, "Lost Providence." I am now writing my second book. My freelance writing on architecture and other topics addresses issues of design and culture locally and globally. I am a member of the board of the New England chapter of the Institute of Classical Architecture & Art, which bestowed an Arthur Ross Award on me in 2002. I work from Providence, R.I., where I live with my wife Victoria, my son Billy and our cat Gato. If you would like to employ my writing and editing to improve your work, please email me at my consultancy, dbrussat@gmail.com, or call 401.351.0457. Testimonial: "Your work is so wonderful - you now enter my mind and write what I would have written." - Nikos Salingaros, mathematician at the University of Texas, architectural theorist and author of many books.
View all posts by David Brussat →
This entry was posted in Architecture, Books and Culture and tagged Arthur Ross Awards, Institute of Classical Architecture & Art, James Stevens Curl, Making Dystopia, Oxford University Press. Bookmark the permalink.

9 Responses to “Dystopia” three years on