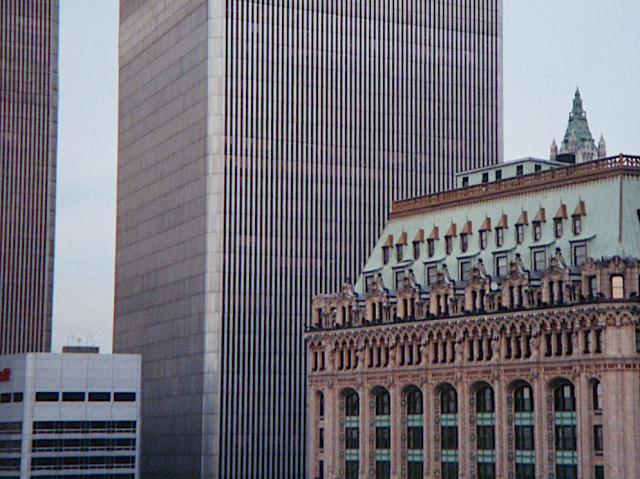 I saw 9/11 as it was happening on a TV screen through one of the large windows of URI’s Providence campus (the Shepard Building) facing Union Street. I was on my way to work at the Journal – two blocks from my downtown loft – where I saw the two buildings, Tower 1 and Tower 2 of the World Trade Center, topple. Two weeks later I visited the scene and wrote “Peering into the towering abyss.”*

I was determined to learn whether one of my favorite buildings, a 1905 Beaux Arts tower at 90 West St. on the edge of Ground Zero, had survived. Finally I saw it. It had been damaged but was still standing, still beautiful. In my column from a couple of weeks after 9/11, I noted that for all their symbolic resonance after their demolition, few considered the twin towers beautiful. My conclusion:

Perhaps buildings, like people, can attain greatness if not beauty in death. Many people shrink from the idea of building tall again. I do not know whether the towers should be rebuilt. A colleague says that would be to court a repeat disaster: Imagine two buildings each with 110 13th floors. Only a lunatic would rent space or take a job there.

Well, I’m not sure I agree. Maybe the murder of these two buildings, and their thousands of occupants and hundreds of rescuing heroes, can generate enough unity and strength of purpose in the civilized world to vanquish terrorism. Maybe then we can rest easy, build big, live large and watch the spirit of two buildings rise from tallness to greatness. Abraham Lincoln was no beauty, either.

Since then I have written many columns and blog posts about rebuilding Ground Zero but none about the terrorist attack on America or America’s wars launched in response to these despicable acts. Three thousand Americans died on 9/11 and more thousands of U.S. soldiers have died in Afghanistan and Iraq. We are still in Iraq, minimally, and have just left Afghanistan, ignominiously. There has been no second major terrorist attack, but after rapid wins in both wars, U.S. and allied forces lost focus and have been in surrender mode for years. We’ve now withdrawn suddenly from Afghanistan, a withdrawal President Biden is calling a victory. His willful obtuseness only deepens the national humiliation.

I have written no columns or blog posts about how America has changed since 9/11. It is not my gig, but I do have my feelings, which grumble occasionally and tangentially in my posts. Life in America has eroded, and America’s prestige in the world has declined. Some people find that worthy of applause. Not me. Large sectors of the nation have officially embraced themes that demonize our citizens, our history, and the principles of our founding. And in addressing the pandemic, our first impulse was to surrender. We shut down our economy, increasing the pandemic’s cost without controlling it. It may be argued that we are not a free country anymore, that the nation lacks a working constitution, not to mention a free and independent press, and that the last election was stolen. Censorship – official, unofficial and self – has largely voided conversation throughout society on the subjects that divide us. The unity we pretend to seek is a joke.

This is a sad indictment of America since 9/11. My gig is architecture, and in architecture things seem no better. Developers continue to construct faceless buildings whose gargantuan size and cold sterility only reinforce authoritarian themes present in our politics and our response to the pandemic. A movement toward a living architecture has managed to carve out a beachhead in the field. It is based on neurobiological discoveries that explain the public’s broad traditional preferences. But classical architects and their advocates are too timid to embrace their very rare opportunities to confront the modernist establishment.

Naysayers used to warn after 9/11 when a policy of caution was advised: the terrorists have already won! I hope not. I like the spirit of Flight No. 93, whose hijacked passengers forced it to crash in a Pennsylvania field on its away to attack either the U.S. Capitol or the White House. As he and his fellow passengers charged the cockpit, Todd Beamer is said to have cried “Let’s roll!” Something like that can-do (indeed, must-do) spirit might be useful in America today.

*In some versions of this post, the link to my old column “Peering into the towering abyss” brings readers to a Journal sign-in form, not the column itself. For example, the link works from my iMac but not from my iPhone. I don’t know whether it will work from platforms used by others. I plan to run that column in its entirety as a post in a couple of days, so readers who cannot access it through the link on their screens can read it anyway.

This blog was begun in 2009 as a feature of the Providence Journal, where I was on the editorial board and wrote a weekly column of architecture criticism for three decades. Architecture Here and There fights the style wars for classical architecture and against modern architecture, no holds barred. History Press asked me to write and in August 2017 published my first book, "Lost Providence." I am now writing my second book. My freelance writing on architecture and other topics addresses issues of design and culture locally and globally. I am a member of the board of the New England chapter of the Institute of Classical Architecture & Art, which bestowed an Arthur Ross Award on me in 2002. I work from Providence, R.I., where I live with my wife Victoria, my son Billy and our cat Gato. If you would like to employ my writing and editing to improve your work, please email me at my consultancy, dbrussat@gmail.com, or call 401.351.0457. Testimonial: "Your work is so wonderful - you now enter my mind and write what I would have written." - Nikos Salingaros, mathematician at the University of Texas, architectural theorist and author of many books.
View all posts by David Brussat →
This entry was posted in Architecture and tagged 9/11, 90 West St., Afghanistan, Ground Zero, Iraq, Joe Biden, World Trade Center. Bookmark the permalink.