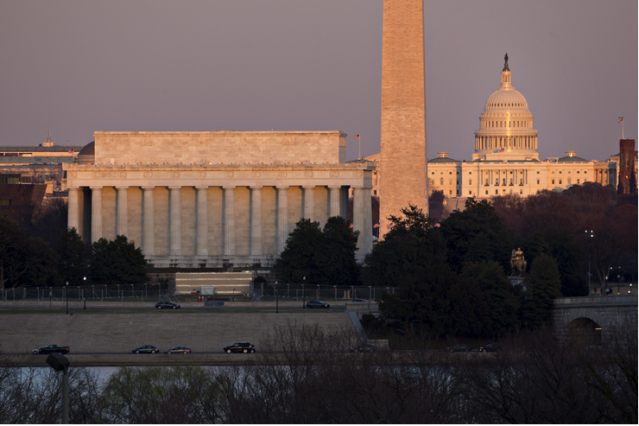 In the temporal orbit of Independence Day, we have seen the passing of classicist Thomas Gordon Smith and the trashing of all the values he respected and that we celebrate on the Fourth of July. Leaving aside the latter, I recently happened upon an interview with classicist Allan Greenberg that voices several themes that both would, I believe, have held in common.

Both men were, you might say, radical classicists in that their designs were often less sedate and more colorful than what is conventional or even natural in the classical language. That commonality suggests their independence of dogma (even of beautiful dogma). I hope readers will take in the interview of Greenberg in its entirety. My guess is that Smith’s views would be similar, if less vociferously expressed, for Smith was more gentle and unassuming than Greenberg, who at 83 is a native of South Africa. He obtained U.S. citizenship in 1973.

Here are a few quotes from the interview, starting where I think Smith and any classicist would immediately concur. To begin with, his clear expression of why classicism is relevant and comprehensible in the modern world:

Granted, in some circles democracy is now considered a racist den of inequity. But let’s leave that aside for another day. Here is Greenberg’s concise description of how classicism relates to the human form:

A Classical building uses the human figure as the crucial measure of all things. The ancient Greeks used columns and statues of people interchangeably. Columns typically have capitals, like human heads, forming their tops, and they have bases corresponding to feet. The function of the ankle – to transmit the body’s weight through the feet to the ground – is performed architecturally by plinths and base moldings. To strengthen the anthropomorphic quality, the upper two thirds of the column shafts have a slight taper, which creates a widened base, like a person with his feet spread solidly apart for balance and stability. This taper – the term for it is entasis – infuses the column with vitality. Similarly, the three-part division of the human body into legs, torso, and head is paralleled by a Classical building’s plinth, walls and columns, and roofs – in other words, base, middle, and top. …

Tradition is a source book. For a classical architect, the past is a series of case studies, which can teach you different lessons about formal manipulation, about construction, about social, political, and other urbanistic questions – about how these challenges were resolved in the past. The past is not dead. It is active and there for you to study. It is relevant.

An important truth is that modern architecture is incapable of providing a coherent source book for architects, and worse, it treats the past as dead.

The following exchange, part of a 1996 essay by Greenberg refashioned  by Martin Cothran into the form of this interview in 1997 for The American Experiment, is interesting in light of recent events:

Before classicism can again occupy a central place in our lives, a monstrous libel must first be undone. Throughout much of the twentieth century, influential segments of the art world have accused classicism of opposing freedom – an allegation that continues to unjustly undermine classicism’s influence.

I will conclude with the following quotes. Greenberg expands at length on the injustice of the current (if thankfully not widespread) notion that classical architecture is fascistic:

A commonplace in the aesthetic education of my generation was the easy dismissal of contemporary classicist architecture as “fascist.” Monumentality, symmetry, mass; the Classical vocabulary of column, arch, dome, and architrave; the use of dressed stone; the sculpted figure – these were, especially in combination, the signals for scoffing. If the offending architecture were safely old, it would be forgiven, but if built [since World War II] it would be linked to Hitler and Mussolini.

The association of classicism with fascism and Nazism extended beyond architecture to Classical painting, music, verse, sculpture, theater, and dance. Even today poets who write in strict metrical form, painters who honor the ideals of harmony, firmness, and utility, actors and directors who tell a coherent story and provoke an audience’s identification with sympathetic characters can be accused of crypto-fascist tendencies by avant-garde critics.

Hitler and Mussolini are claimed to be artistic conservatives who used the vocabulary of classicism, especially in architecture, to express their political ideology. Since the fascists rejected modernist art and persecuted those who practiced it, the logical conclusion was that artistic modernism stood for freedom of human expression, while traditional art meant the suppression of creative impulses and the destruction of personal liberty. Or so went the accusation. …

Certainly Hitler encouraged Albert Speer to create a new Classical architecture for the Third Reich. Mussolini, too, favored classicizing art and architecture. But as Leon Krier argues in his essay “An Architecture of Desire,” Hitler’s choice of style may have contradicted his revolution’s spirit. The appropriate expression for an efficient totalitarian order, presided over by a planning bureaucracy, and predicated on reducing the individual to a cog in the machine, would surely have been Bauhaus or International Style. The fact that Hitler and his lieutenants preferred Classical art and architecture for themselves is no more significant than the fact that they preferred Cuban cigars and French wine: Classical art was the best quality art available. …

By contrast, the frequently harsh innovations of modernist art, which reject the mysterious practices of tradition, suggest that modernism is in fact the appropriate expression of the totalitarian state.

I have long asserted that a primary purpose of modern architecture is to mold and prepare the human psyche to be a cog in the machine, not just of industry but of politics, culture, ideology and broader society.

Amid architecture’s dark hours, it is pleasing to have Allan Greenberg on my side, which perhaps only goes to show how unspectacular is the insight that classicism and modernism are at the opposite ends of the political spectrum. I hasten to add that architecture itself is apolitical; liberals and conservatives alike may partake of its advantages. It may be a relief, as well, that most modernist architects have little if any familiarity with radical aesthetic theories; still, simply by designing buildings as they learned to do as students, they carry forth, without realizing it, the regrettable doctrines of Corbusier and his acolytes.

This blog was begun in 2009 as a feature of the Providence Journal, where I was on the editorial board and wrote a weekly column of architecture criticism for three decades. Architecture Here and There fights the style wars for classical architecture and against modern architecture, no holds barred. History Press asked me to write and in August 2017 published my first book, "Lost Providence." I am now writing my second book. My freelance writing on architecture and other topics addresses issues of design and culture locally and globally. I am a member of the board of the New England chapter of the Institute of Classical Architecture & Art, which bestowed an Arthur Ross Award on me in 2002. I work from Providence, R.I., where I live with my wife Victoria, my son Billy and our cat Gato. If you would like to employ my writing and editing to improve your work, please email me at my consultancy, dbrussat@gmail.com, or call 401.351.0457. Testimonial: "Your work is so wonderful - you now enter my mind and write what I would have written." - Nikos Salingaros, mathematician at the University of Texas, architectural theorist and author of many books.
View all posts by David Brussat →
This entry was posted in Architecture and tagged Allan Greenberg, classical architecture, Fascism, Hitler, Modern Architecture, Mussolini, Thomas Gordon Smith. Bookmark the permalink.