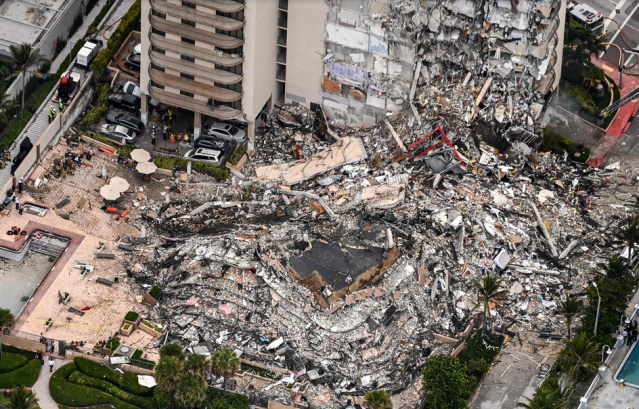 Aside from expressing sorrow and dismay, it is too early to say anything definitive about the beachfront building collapse in Surfside, Fla., north of Miami. The 12-story Champlain Towers condominiums opened in 1981 with 136 apartments. About half of the units were damaged or destroyed. Of the residents, as of Friday evening, four are confirmed dead, 37 have been rescued, 120 have been accounted for, and 159 are still missing, up from 99 yesterday. While many residents were apparently absent at 1:30 a.m. or so Thursday when it suddenly began to pancake, the death count is considered sure to rise sharply.

It is vital to learn the exact cause of this avoidable tragedy.

Most buildings that collapse in whole or in part do so during construction or during or after a hurricane or an earthquake. More than one-half of Champlain Towers collapsed early Thursday morning for no apparent reason. The building had passed inspections very recently as part of Florida’s mandated 40-year safety assessment, but rumors have emerged that 8777 Collins Ave. had been sinking at a rate of one or two millimeters per year, about the same rate as the Leaning Tower of Pisa until it was stopped in the 1990s.

The mind shrinks from contemplating what it must have been like to be inside the building as it began to topple. Most victims probably died instantly in their sleep, perhaps groggily aware for an instant or two of some noise and shaking, as if still in a dream state. Certainly few of those who did not escape survived long enough to guess what was happening. This may be of some comfort to survivors of loved ones now gone.

Several lucky survivors or witnesses have told reporters that “this does not happen in America.” Truly? The mind reels. And yet I can think of no equivalent to Thursday’s disaster. The worst collapse in Florida history, until now, was the five-story Harbour Cay, also a condominium building, which was near the end of construction when it gave way, killing 11 and injuring 23. Coincidentally, this tragedy occurred in 1981, the same year the Champlain Towers was completed.

Across the street from Champlain Towers is Eighty-Seven Park, an 18-story, 68-unit condo building designed by starchitect Renzo Piano, which opened last year. If nearby land was squishy, nearby construction might have aggravated the condition. According to an article on the collapse in The Conversation:

There was also construction work ongoing nearby, and investigators will need to consider whether this could have disturbed the foundations. This nearby construction work could have created ground movement under nearby buildings due to vibrations or deep excavations work.

Obviously no building falls down for no reason, and it’s far too early to assign blame. It is unfair to point a finger at the modernist design of the Champlain Towers, but it is entirely appropriate to wonder whether the differences between modernist and traditional architecture – or, if you prefer, differences between design and engineering practices past and present – might have played a role.

Buildings once were held up by load-bearing masonry walls. Materials were laid on thick to err on the side of caution. Then came structural steel upon which curtain wall was hung, after which the sheer solidity of construction grew more tenuous. Late in this span of time, reliance was placed on computer systems able to pinpoint the stress a structure could sustain – or so it was supposed.

Better able, to be sure, but as engineers relied more and more on computations of exactitude in the performance of materials under stress, the savings involved in attaining such precision became difficult to resist. Modernist architects ever eager to demonstrate their contempt for natural principles such as gravity put ever more pressure on engineers already weary of their usual helping of the sloppy seconds of architecture.

Architects Journal looks at potential causes of the collapse and offers a diagram (below) tracing the order in which different sections of the building collapsed.

Has modern engineering in the service of modern architecture, and in particular modernist skyscrapers, begun to cut things a little too fine? If you live in one of those supertall towers that increasingly mar the skyline in New York City and elsewhere, you might have given some thought to that possibility. This question, however it is phrased, must not be dodged or neglected as the fate of the doomed Champlain Towers is reviewed.

Diagram of apparent order in which building collapsed. (Architects Journal)

This blog was begun in 2009 as a feature of the Providence Journal, where I was on the editorial board and wrote a weekly column of architecture criticism for three decades. Architecture Here and There fights the style wars for classical architecture and against modern architecture, no holds barred. History Press asked me to write and in August 2017 published my first book, "Lost Providence." I am now writing my second book. My freelance writing on architecture and other topics addresses issues of design and culture locally and globally. I am a member of the board of the New England chapter of the Institute of Classical Architecture & Art, which bestowed an Arthur Ross Award on me in 2002. I work from Providence, R.I., where I live with my wife Victoria, my son Billy and our cat Gato. If you would like to employ my writing and editing to improve your work, please email me at my consultancy, dbrussat@gmail.com, or call 401.351.0457. Testimonial: "Your work is so wonderful - you now enter my mind and write what I would have written." - Nikos Salingaros, mathematician at the University of Texas, architectural theorist and author of many books.
View all posts by David Brussat →
This entry was posted in Architecture and tagged Building Collapse, Champlain Towers, engineering, Modern Architecture, Renzo Piano, Surfside FL. Bookmark the permalink.