A memorial to the agrafe

The Bowery Savings Bank, 130 Broadway. McKim, Mead & White, 1895. Each of the Corinthian columns and pilasters has an “astragal” moulding below its capital, just above the fluted portions of their shafts. As an example of “agrafe,” this astragal moulding was extended along the the faces of the adjacent walls, forming the bottom edge of a “sub frieze” at the tops of those walls; within that sub-frieze, a series of elegant geometric panels were carved. (Photo by Eden, Janine and Jim, via Wikimedia Commons)

Today is a day to remember those who have given their lives to perpetuate our American system, the first rule based on the ideal of equality under law for all citizens. Each citizen differs, and likewise, while maybe not quite so memorably, each element of the ornamental canon of classical architecture also is different, worthy and beautiful in its own way.

Seth Joseph Weine, an architect, archivist and tribune of classical architecture, long associated with the Institute of Classical Architecture & Art, headquartered in New York City, recently sent to the TradArch listserv a brief essay on a term in that canon that was new to both Seth and to me, and I hope it will be just as fascinating to readers as it is to both of us. His essay is below:

I was curious about what Wikipedia says are the main characteristics of Beaux-Arts architecture, so I read their article on it. I think it gets some things right – but, perhaps, doesn’t quite address the powerful soul of it.

But that’s not what I want to ask you all about. What I found mysterious was this passage in the article: “Beaux-Arts training made great use of agrafes, clasps that link one architectural detail to another.”

I think I know what they’re referring too – things like:

I love such stuff, this sort of interlocking of the design, and, in practice, I would play such delightful games as often as possible and appropriate. But I never encountered a term for such moves until I came across the word “agrafes.” 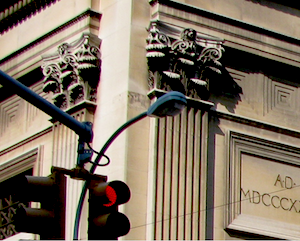 [Here Seth inserts a detail from the photograph above that gives a closer impression of the agrafe.]

I see that the word has another established use in the terminology of architectural construction: especially. it can refer to the dovetail-shaped joints we see in ancient and traditional masonry. Also, the non-architectural definition of the word means, according to Webster, “a hook-and-loop fastening,”  and they cite its etymological roots in the Latin for “to clamp on.”

Well, I’d say that sense of attachment or connectiveness resonates well with the the Beaux-Arts architectural term cited by Wikipedia.

I’ve certainly practiced agrafe-ing! But in my vasty vast experience and reading, I’d never come across the term for that kind of thing. Has anybody else ever heard of this term? Any scholarship on this? Any collection of great “agrafes”?

This blog was begun in 2009 as a feature of the Providence Journal, where I was on the editorial board and wrote a weekly column of architecture criticism for three decades. Architecture Here and There fights the style wars for classical architecture and against modern architecture, no holds barred. History Press asked me to write and in August 2017 published my first book, "Lost Providence." I am now writing my second book. My freelance writing on architecture and other topics addresses issues of design and culture locally and globally. I am a member of the board of the New England chapter of the Institute of Classical Architecture & Art, which bestowed an Arthur Ross Award on me in 2002. I work from Providence, R.I., where I live with my wife Victoria, my son Billy and our cat Gato. If you would like to employ my writing and editing to improve your work, please email me at my consultancy, dbrussat@gmail.com, or call 401.351.0457. Testimonial: "Your work is so wonderful - you now enter my mind and write what I would have written." - Nikos Salingaros, mathematician at the University of Texas, architectural theorist and author of many books.
View all posts by David Brussat →
This entry was posted in Architecture and tagged Agrafe, classical architecture, ICAA, Ornament, Seth Weine, Wikipedia. Bookmark the permalink.