The Duck and Bunny, a snuggery at 312 Wickenden St., no longer exists. (GoLocalProv)

The day before Easter Sunday the Duck & Bunny snuggery, in an elegant colonial on Wickenden Street. was torn down. By definition, a snuggery is “a cozy place.” The Duck & Bunny was that and more, a sweet salon for tea, crepes, cupcakes, cakes and other delights, intimate rooms with comfortable chairs, a leafy rear garden of exquisite charm, and pleasant young people serving quiet, gentle, civilized customers. It was even painted light pink. Not any more. Gone.

Detail of Duck and Bunny. (patch.com)

The colonial housing the Duck was among the most pleasingly classical buildings on Wickenden, with an embellished doorway surround, a set of four wrough-iron light fixtures, a slender entrance railing, a sign with duck and bunny silouettes hung from an antique frame, and soft façade lighting at night, not to mention its pinkish hue.

Now there is a pile of wood behind a chain-link fence. Perhaps soon there might be a parking blacktop. At least this would raise the intriguing possibility of a reasonably decent building to fill the parking lot rather than the immediate certainty of a degraded Wickenden. The imagination inevitably opens the door to pain. Even a new colonial is unlikely to live up to the Duck & Bunny’s design standards, outside let alone its highly classicized inside. At best maybe a new “colonial” by some bad-trad firm might resemble the new four-story colonial that went up a couple of years ago two houses west of the Duck & Bunny.

Aqua-Life being razed at Hope and Wickenden. (Brown Daily Herald)

More likely is the fate of the old Aqua-Life Aquarium at the corner of Wickenden and Hope, where a charming building with an aquatic mural populated by fish came down for a quasi mod/trad abomination too big and too lacking in soul. Frank Gehry is unlikely to be given a commission here, or anywhere in Providence.

The Duck & Bunny was born in 2010 but has been lodged in a house born in 1900. Ascendancy has not been the direction of architectural evolution here. Architects today cannot be relied upon even to copy the past. Which is harder than it sounds.

I had heard over a year ago that the Duck & Bunny was at risk, yet also that its owners had closed for renovations but expected to reopen in 2021. I am abashed at being caught by surprise. The Duck & Bunny’s demolition must have been okayed by the Historic District Commission, the City Plan Commission or some other agency. How could they? Why was I not informed! Harrumph!

If Providence is to avoid the seemingly inevitable erosion of its historical character, the redevelopment process must be renovated to exclude all but restorations or new buildings erected to the design standards of 1900.

Update: A correspondent (not a commenter) has emailed me to say she heard on tonight’s news that “the building needed to be brought to code and wasn’t stable. They are rebuilding and kept a lot of items to put back in and will reopen the same restaurant when completed.” That’s great news, if true. (10:04 p.m. Monday)

Update of update: My correspondent sent the segment from the WJAR evening news, in which one of the Duck & Bunny owners clarifies that they expect to rebuild. In the segment it is more clear that they expect to install the restaurant much as it was but less clear that they will rebuild the building as it was (with upgrade to code, of course). Still, viewers, such as myself, who hope for the latter have every reason to be optimistic. If the reconstruction turns out to be a full restoration (with upgrades for HVAC and other internal systems), that may be a first for Providence, possibly for Rhode Island. (11:07 p.m.) 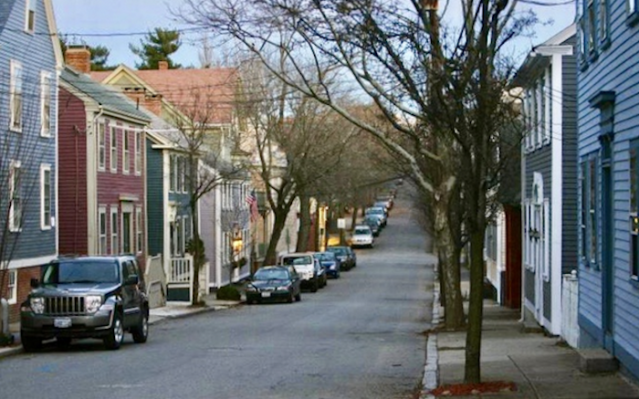 In some blocks, the character of Wickenden hangs tough. (William Morgan/GoLocalProv)

This blog was begun in 2009 as a feature of the Providence Journal, where I was on the editorial board and wrote a weekly column of architecture criticism for three decades. Architecture Here and There fights the style wars for classical architecture and against modern architecture, no holds barred. History Press asked me to write and in August 2017 published my first book, "Lost Providence." I am now writing my second book. My freelance writing on architecture and other topics addresses issues of design and culture locally and globally. I am a member of the board of the New England chapter of the Institute of Classical Architecture & Art, which bestowed an Arthur Ross Award on me in 2002. I work from Providence, R.I., where I live with my wife Victoria, my son Billy and our cat Gato. If you would like to employ my writing and editing to improve your work, please email me at my consultancy, dbrussat@gmail.com, or call 401.351.0457. Testimonial: "Your work is so wonderful - you now enter my mind and write what I would have written." - Nikos Salingaros, mathematician at the University of Texas, architectural theorist and author of many books.
View all posts by David Brussat →
This entry was posted in Architecture, Development, Preservation and tagged Duck & Bunny, Historic District Commission, Preservation, Providence RI, Wickenden Street. Bookmark the permalink.

5 Responses to Mourning the Duck & Bunny