Driehaus for Treese of Mainz

Perhaps it makes sense that Europeans have received the four of the last five Driehaus prizes. One went to a Thai. At the risk of appearing nativist, the last American laureate was the Florida architect Scott Merrill (2016). This year’s deserving recipient has just been announced by the architecture school at the University of Notre Dame. Sebastian Treese, of Germany, is part of an admirable European trend toward traditional architecture that may be outstripping the strides being made on this side of the Atlantic.

I expect to be posting more on European trends soon.

Some of the traditional design in Europe is dodgy – less so than in the U.S., of course – but European architects have the great advantage of working in Europe, where urban settings have survived intact, effectually surrounding European designers with excellent models of beauty in their craft. The work of Treese, who was raised in the city of Mainz, fits superbly into its settings. His apartment building Eisenzahnstrasse 1, in Berlin’s Charlottenburg district, is a good example. His firm’s website (linked above) describes its stylish design:

The façade’s clear horizontality – a nod to Haussmann’s Paris – is emphasized by the strong, continuous lines of the balustrades. The central, gently curved avant-corps resting on tectonically credible consoles carefully maintains the horizontal nature of the façade. Historically, residential buildings in Berlin were erected as plastered masonry structures, and Eisenzahnstrasse 1 was conceived of and realized in the same material. As a result, despite its peculiarities, the building seamlessly blends into its surroundings to complement the existing streetscape.

In short, Treese’s design reflects the innovative “peculiarities” common to centuries of classical and traditional work. His apartment house takes not only its horizontality from Haussmann’s Paris but its curved vertical bays from styles associated primarily with the Baroque, throughout Europe but originating in Italy. It is only in the imaginations of modernists wearing their Pevsner-shaded glasses that classical and traditional work is divided up into “periods” so distinct that they cannot appropriately inspire work in any other era (such as our own). In fact, these historicist periods blend from one to the next so extensively, and take their inspiration from so many sources, that distinct styles within distinct temporal windows are difficult to find in genuine architectural history.

This knowledge suffuses the work of Treese and the best classicists of Europe (and America). Nevertheless, even in the highest reaches of classical orthodoxy, such as, I’m afraid to say, Notre Dame, the impulse remains strong to fudge the difference between work inspired by tradition and the experimental work that still dominates today in Europe and America. For example, the Notre Dame press release announcing Treese’s prize reads:

His buildings enrich the urban settings where they are constructed, and upon reflection it is clear that they are imbued with a rich understanding of historical precedent.

How long, really, must one “reflect” in order to conclude that Treese’s buildings are “imbued with a rich understanding of historical precedent”? It seems to me that only those whose understanding of architecture is marinaded in the failed orthodoxy of modernism would need to reflect for more than one or two nanoseconds to reach that conclusion. The press release continues:

The firm is reinterpreting the lessons of the past to produce a new traditional architecture and urbanism that embodies the culture, climate and physical order of existing places. …

The firm is not “reinterpreting” anything, so far as I can tell. That is what modernists do. Rather, Treese and his colleagues are making use of techniques and design philosophies common to generations of architects until traditional architecture was almost snuffed out by modern architecture.

Maybe I am being too picky, and I suppose that in today’s world, saying that an architect is just doing what architects did for centuries would be coming too darn close to asserting that they lack creativity. That is not true of Sebastian Treese, as I’m sure most close observers of the Driehaus Prize and Notre Dame recognize. Philanthropist Richard H. Driehaus and the School of Architecture at Notre Dame have handed out this award – worth $200,000 to recipients – since 2003, when the excellent Leon Krier, a native of Luxembourg, won for his architecture, his theories, and his witty sketches explaining why traditional architecture and urbanism are more humane than modern architecture. Keep up the good work!

[The original version of this post failed to note that one of the last five Driehaus laureates, OngArd Satrabhandu (2020), is Thai. Also, the Driehaus Foundation itself is not involved in the awards program.] 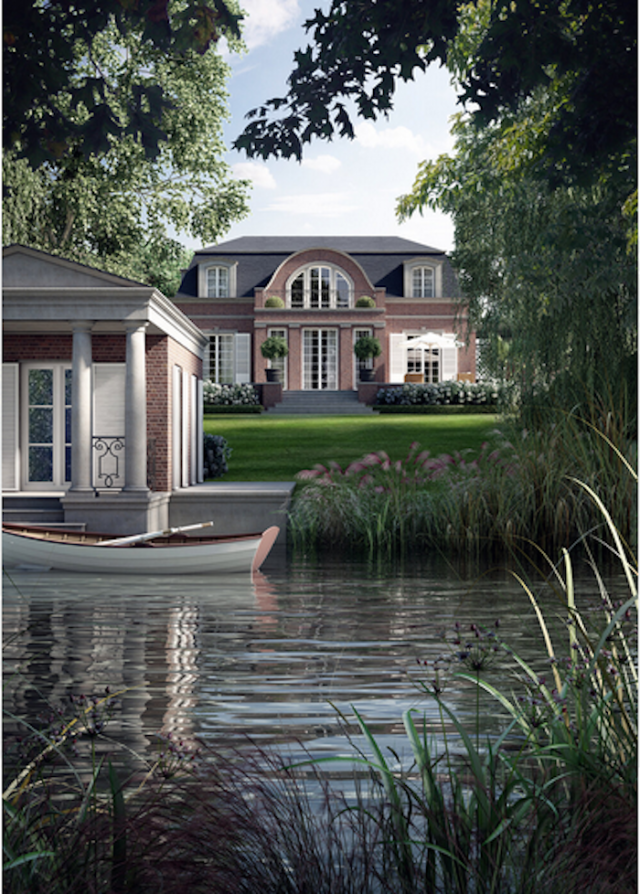 This blog was begun in 2009 as a feature of the Providence Journal, where I was on the editorial board and wrote a weekly column of architecture criticism for three decades. Architecture Here and There fights the style wars for classical architecture and against modern architecture, no holds barred. History Press asked me to write and in August 2017 published my first book, "Lost Providence." I am now writing my second book. My freelance writing on architecture and other topics addresses issues of design and culture locally and globally. I am a member of the board of the New England chapter of the Institute of Classical Architecture & Art, which bestowed an Arthur Ross Award on me in 2002. I work from Providence, R.I., where I live with my wife Victoria, my son Billy and our cat Gato. If you would like to employ my writing and editing to improve your work, please email me at my consultancy, dbrussat@gmail.com, or call 401.351.0457. Testimonial: "Your work is so wonderful - you now enter my mind and write what I would have written." - Nikos Salingaros, mathematician at the University of Texas, architectural theorist and author of many books.
View all posts by David Brussat →
This entry was posted in Architecture and tagged classical architecture, Driehaus Prize, Germany, Modern Architecture, Richard H. Driehaus, Sebastian Treese, University of Notre Dame School of Architecture. Bookmark the permalink.

2 Responses to Driehaus for Treese of Mainz