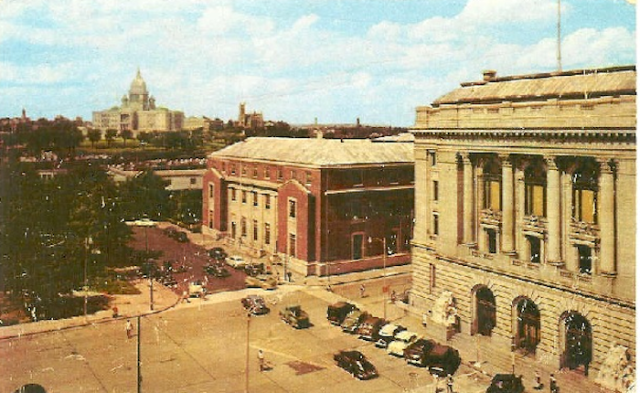 I speak out in praise of my friend and fellow Rhode Island architecture critic William Morgan’s “In Praise of the Post Office.” In this recent article for GoLocalProv.com, Morgan writes:

The physical post office is the embodiment of the miracle. More than just a convenient place to buy stamps, mail packages, and peruse wanted posters, the post office is similar to a public library–a temple of democracy. Like a pub in an English village, the post office is a meeting place where news is exchanged, while the architecture of post offices used to serve as manifestations of national pride.

All architecture used to serve as manifestations of pride, national or otherwise. Morgan, whose architectural attitudes are, I think, the exact opposite of my own, loves old buildings but is blind to the ugliness of modern architecture and cannot see the beauty of the classical revival, that is, new old buildings. He comes as close as he ever has in this article to admitting there was once a beauty in architecture that has disappeared. In the case of the disappearance of beautiful post offices, Morgan attributes that to the privatization of the post office under President Nixon, with worse to come:

During the Reagan era it was decided to lease post offices rather than build them, another example of choosing foolish economies over the public good. … Compound this with a national aesthetic blindness, along with the notion that the “postal service” could be streamlined to operate like a discount department store, and it is no wonder that elegance and style became relics of the past.

Whether privatization has helped or hurt the posting of letters and packages in America may be debated, yet it is surely true that a “national aesthetic blindness” has caused “elegance and style [to] become relics of the past.” As Morgan knows, I believe that the scourge of modernism, which he generally supports, is the root cause of this national aesthetic blindness (actually it is global in scope).

Morgan correctly attributes olden postal beauty to a century and a half of postal design by supervising architects of the U.S. Treasury – the first of whom was Ammi Burnham Young, who designed Providence’s 1857 custom house (also a post office for a period) – and the Works Progress Administration under FDR, which hired many artists to paint murals and to commit other forms of beauty during the Great Depression. What followed was the national blindness that Morgan seems to support, in writing that consistently admires tedious modernist work over the beauty of new architecture that harks back to the traditions he clearly adores. The choice in his article of beautiful postal buildings in Westerly and East Providence is exemplary. Yes, he deplores the decline in the elegance of postal facilities. His ideology is insufficient to inflict total blindness on his vision.

Many of the leased post offices of the U.S. Postal Service are located in suburban strip malls rather than on the Main Streets of city and town centers in decline. Still, has not the policy of leasing spared us a generation of modernist postal facilities? I would argue that it has, and that this may be a silver lining in the dark cloud of privatization. 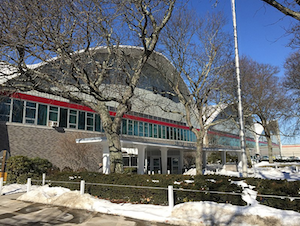 An exception is the main post office in Providence, the first automated post office in the world, built in 1960 and designed by Maguire & Assocs. Its form is an allusion to the Quonset hut, originally developed in 1940 for the Navy at a construction facility at Quonset Point, in Davisville, R.I. Its functional qualities, mainly ease and speed of construction, do not seem, for some reason, to have favored its continuity beyond World War II. Perhaps that can be blamed on its dysfunctional aesthetic merits, but those demerits still do not appear to have deterred other forms of modernist ugliness in the postwar era and beyond.

Kennedy Plaza in downtown Providence features a pair of post offices side by side at the square’s eastern end. The 1908 neoclassical building that is now a federal courthouse was originally a post office. The John O. Pastore Building, completed in 1940, was designed in what seems to be a combo of the Art Deco and Colonial Revival styles, and is now downtown’s main P.O. Both are lovely, and long may they survive, serving the public’s right to and desire for beauty, and yet serving also as reminders of Will Morgan’s eloquent but curious combination of vision and blindness.

This blog was begun in 2009 as a feature of the Providence Journal, where I was on the editorial board and wrote a weekly column of architecture criticism for three decades. Architecture Here and There fights the style wars for classical architecture and against modern architecture, no holds barred. History Press asked me to write and in August 2017 published my first book, "Lost Providence." I am now writing my second book. My freelance writing on architecture and other topics addresses issues of design and culture locally and globally. I am a member of the board of the New England chapter of the Institute of Classical Architecture & Art, which bestowed an Arthur Ross Award on me in 2002. I work from Providence, R.I., where I live with my wife Victoria, my son Billy and our cat Gato. If you would like to employ my writing and editing to improve your work, please email me at my consultancy, dbrussat@gmail.com, or call 401.351.0457. Testimonial: "Your work is so wonderful - you now enter my mind and write what I would have written." - Nikos Salingaros, mathematician at the University of Texas, architectural theorist and author of many books.
View all posts by David Brussat →
This entry was posted in Architecture and tagged Ammi Young, Post Office, Providence RI, U.S. Postal Service, William Morgan, Works Progress Administration. Bookmark the permalink.