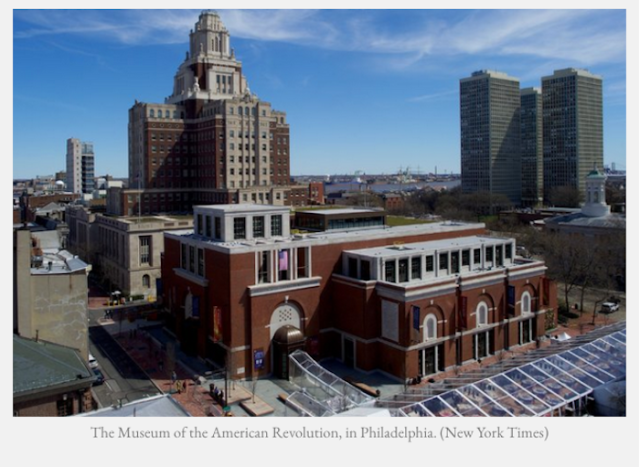 A few days ago I wrote “Life preserver for Inga Saffron,” in which I deplored the “loose thinking” of Saffron and other architecture critics. I described that thinking in the following post, “Museum of National Identity,” from November 2017.

Christopher Hawthorne, the architecture critic for the Los Angeles Times, wrote a piece on Philadelpia’s new Museum of the American Revolution, by Robert A.M. Stern Architects, back in June that I somehow missed. “An Identity Crisis for American Architecture” cries out for rebuttal.

He asserts that in Stern’s eyes, the museum “had to embody a certain Americanness: It had to look as though it belonged in a group of buildings hugely important to the country’s early history,” such as Independence Hall, as if there were something wrong with that. After noting that Philadelphia Inquirer critic Inga Saffron had called it “stodgy,” but without mentioning that her chief objection was that its design was not “revolutionary,” he writes:

It would be a mistake to say that a museum dedicated to exploring the roots of the American Revolution has some obligation to be explicitly revolutionary in its architecture — that it should suggest upheaval, radicalism or rupture in its very shape.

But he reverses himself in the next breath:

But there’s a significant gap between that architectural attitude and the one embodied by Stern’s design, which assumes that the most important questions about national identity have long been settled. What’s really missing from the museum’s architecture, perfectly well-turned but also perfectly complacent, is any noticeable sense of curiosity.

I will assume that by “curiosity” he means “revolutionary” – that is, rejecting the supposed complacency about our national identity somehow revealed by the museum. He, like Saffron, wanted the building to be modernist. He doesn’t want to admit that, but he fairly shouts it between the lines.

Of course, that betrays a misunderstanding of the particular revolution at issue. Both seem not to understand what the American Revolution was all about. Yes, the colonies revolted against King George, but they were reacting to the king’s refusal to grant the colonists the same rights as English citizens. The colonists did not object to English rule or English law or England per se, they objected to being allowed only partial participation in it. That’s what “No taxation without representation” meant.

Understanding this might put a different spin on the idea that a museum about the Revolution necessarily requires a specifically rejectionist attitude in its design.

Twisting the meaning of the American Revolution to fit the modernist narrative fits into a long tradition among modernists. Here is a short list of words that have been stripped of their real meaning by a culture, including architecture, that embraces the modernist project of rejecting American traditions and cultural mores:

Nostalgia means yearning for the good things of the past. It has been twisted to mean wallowing in that yearning to the point of refusing to accept change.

Authenticity means the quality of being authentic, not false. It has been twisted to mean the quality of skepticism toward traditional or conventional attitudes, including buildings designed to reflect those attitudes.

Modern means current, of today, up to date. It has been twisted to emphasize discontinuity above continuity in attitudes, practices and traditions, including those relating to design.

Of course most people who embrace traditional architecture have their own favorites, and reject the idea that buildings that reflect the continuity of tradition also represent a rejection of all change. It is the modernists who, harboring a warped view of tradition, believe that modern architecture represents a stage in progress that need not further evolve and that certainly must not, as they see it, regress.

Modern architecture is part of a deconstructivist program to deny that reality and to do so in part by introducing new meanings to words, undermining traditions and institutions, and enforcing new mandates in the language of architecture. A natural and inevitable opponent of that program is new traditional architecture.

I don’t think most modern architects today buy into the deconstructivist program or are even aware of it, but it is implicit, and often explicit, in the writings of founding modernists such as Corbusier, Mies and Gropius. All modern architects help carry out that program whether they realize it or not.

It is no surprise that in a free society some will emphasize its ideals, and want to move toward them, and others will emphasize its flaws and want to start from zero. They are in disagreement. So be it. But I really wish people like Hawthorne and Saffron would acknowledge the degree to which people like Stern bend over backward to embrace the challenge posed by modern architecture. (That’s the understatement of the week. Much design by RAMSA, the firm founded by Stern, is in fact modernist.)

Just look at one of the earlier drawings of the Museum of the American Revolution. It originally had a cupola. Those who wished that the design were modernist badgered Stern into removing it. Other aspects of the building also compromise between tradition and change in architecture – in my opinion too much so. Why Hawthorne and Saffron are loath to acknowledge this is understandable, but it nevertheless amounts to rhetorical dishonesty in the discourse of architecture.

[Christopher Hawthorne no longer works for the Los Angeles Times. He has joined the city’s department of development.] 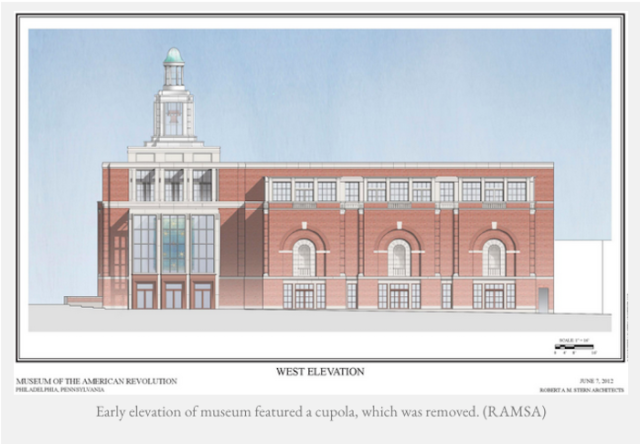 This blog was begun in 2009 as a feature of the Providence Journal, where I was on the editorial board and wrote a weekly column of architecture criticism for three decades. Architecture Here and There fights the style wars for classical architecture and against modern architecture, no holds barred. History Press asked me to write and in August 2017 published my first book, "Lost Providence." I am now writing my second book. My freelance writing on architecture and other topics addresses issues of design and culture locally and globally. I am a member of the board of the New England chapter of the Institute of Classical Architecture & Art, which bestowed an Arthur Ross Award on me in 2002. I work from Providence, R.I., where I live with my wife Victoria, my son Billy and our cat Gato. If you would like to employ my writing and editing to improve your work, please email me at my consultancy, dbrussat@gmail.com, or call 401.351.0457. Testimonial: "Your work is so wonderful - you now enter my mind and write what I would have written." - Nikos Salingaros, mathematician at the University of Texas, architectural theorist and author of many books.
View all posts by David Brussat →
This entry was posted in Architecture and tagged Architecture Critic, Christopher Hawthorne, Deconstructivism, Inga Saffron, Los Angeles Times, Museum of the American Revolution, Philadelphia Inquirer, RAMSA, Robert A.M. Stern. Bookmark the permalink.

3 Responses to Museum of National Identity