Nell and grandfather leave shop for the last time.

In recent days I’ve received a veritable flood of emails of about architectural drafting and illustration, the first regretting the disappearance of the tools of that trade, the others a succession of excellent examples. I’m not sure all of the sets of examples (or any of them) are species of the art in question. They are old, to be sure, as print-worthy examples of architectural draftmanship of recent vintage are rare. But all of those I’ve been sent are brilliant.

London, by Phiz, from “Bleak House.”

I plan a series of posts displaying some of these illustrations, and I begin with illustrations by George Cattermole and Hablot K. Browne, better known as Phiz. Their names are worthy of Dickens, whose The Old Curiosity Shop they depict. Except for the scene of Nell and granddad leaving the shop, the book has no vivid illustrations of London’s streets, so I have provided one he did for Bleak House. First, however, let’s enjoy a description of the “rooms” inhabited by one of the book’s chief characters, Mr. Richard Swiveller, one of several ridiculous creatures eager to take advantage of Little Nell, or rather to take possession of her supposed secret wealth. Her death in the novel caused a sudden and mass sensation among her readers, who followed her plight during 1841 in weekly installments. Oscar Wilde is said to have remarked: “One would have to have a heart of stone to read the death of little Nell without dissolving into tears … of laughter.”

Here is Dickens’s depiction of Dick Swiveller’s rooms. The author introduces the passage by describing the “wine” served by Dick Swiveller to guests, which is actually a mixture of gin and water. Dickens continues:

By a like pleasant fiction his single chamber was always mentioned in the plural number. In its disengaged times, the tobacconist had announced it in his window as “apartments” for a single gentleman, and Mr. Swiveller, following up the hint, never failed to speak of it as his rooms, his lodgings, or his chambers, conveying to his hearers a notion of indefinite space, and leaving their imaginations to wander through long suites of lofty halls, at pleasure.

Let that passage, from the 1985 Penguin Classics edition, serve as a teazer for the architectural illustratons below, in the order of the tale. 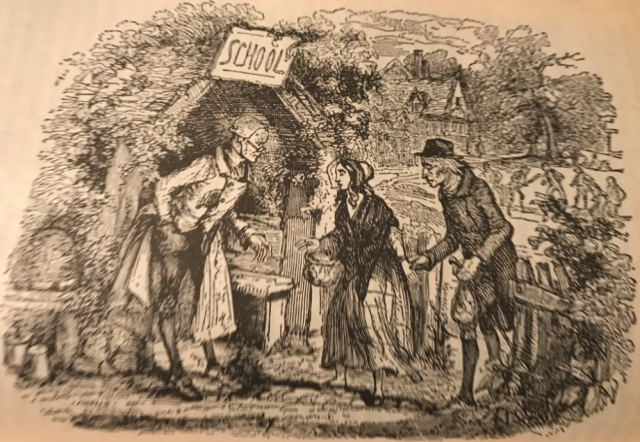 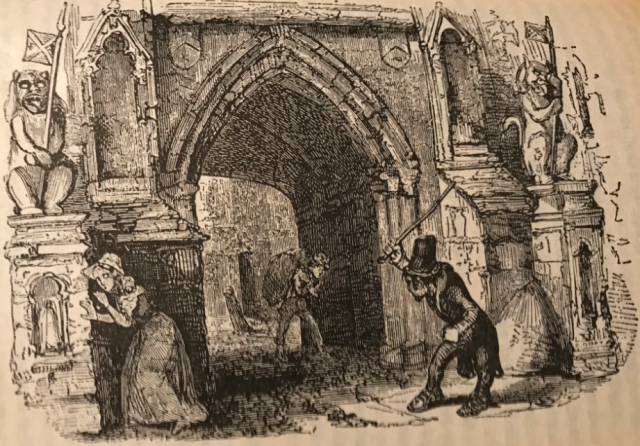 This blog was begun in 2009 as a feature of the Providence Journal, where I was on the editorial board and wrote a weekly column of architecture criticism for three decades. Architecture Here and There fights the style wars for classical architecture and against modern architecture, no holds barred. History Press asked me to write and in August 2017 published my first book, "Lost Providence." I am now writing my second book. My freelance writing on architecture and other topics addresses issues of design and culture locally and globally. I am a member of the board of the New England chapter of the Institute of Classical Architecture & Art, which bestowed an Arthur Ross Award on me in 2002. I work from Providence, R.I., where I live with my wife Victoria, my son Billy and our cat Gato. If you would like to employ my writing and editing to improve your work, please email me at my consultancy, dbrussat@gmail.com, or call 401.351.0457. Testimonial: "Your work is so wonderful - you now enter my mind and write what I would have written." - Nikos Salingaros, mathematician at the University of Texas, architectural theorist and author of many books.
View all posts by David Brussat →
This entry was posted in Architecture, Art and design and tagged Architectural Drafting, Dickens, Little Nell, Old Curiosity Shop, Penguin Classics, Phiz. Bookmark the permalink.