They don’t get Carnegie Hall

Here is another edition of Timesman Michael Kimmelman’s virtual tours through Manhattan’s neighborhoods accompanied by celebrity architects, in this case Midtown’s Carnegie Hall area with Billie Tsien and Tod Williams, who once lived in a Carnegie Hall studio (they are, I think, married). While their architecture is as deplorable as that of the rest of their tribe, I have a soft spot for them because their rusty hulk, the American Folk Art Museum (embedded in a facade of the Museum of Modern Art) was demolished to make way for an equally unpleasant addition to MoMA. You’d think they certainly now join the rest of us in feeling the brutality of modern architecture, right? Well, probably not, but we can hope.

I featured one of critic Kimmelman’s strolls in an earlier post, “Along NYC’s Museum Mile,” last April, with Zack DeZon along as photographer, and here he is again. DeZon’s photos reveal the embellishments of some of the older buildings on the itinerary. His shot of Manhattan’s new skyline, embellished – le mot injuste – by new stick skyscrapers puts the lie to Kimmelman’s nutty description of the sticks as “turning the storied cliff-face of high-rises lining Central Park South into the equivalent of chess pawns to their queens, kings and bishops along 57th and 58th Streets.” Quite the reverse, actually.

Among the remarks of Tod Williams: “Architects today have so many consultants, we are so risk-averse, but we still make mistakes.” That must be the understatement of the week. He adds: “It’s just that now we can blame somebody else.” (Anyone except themselves.)

Some of Williams’ and Tsien’s recollections of living in Carnegie Hall are worth reading. Most of their chatter with Kimmelman about architecture and the development of Midtown? Well, maybe not so much.

Here, with the exception of his shot of the skyline noted above, are some of DeZon’s shots of the loveliest sights from Kimmelman’s virtual tour: 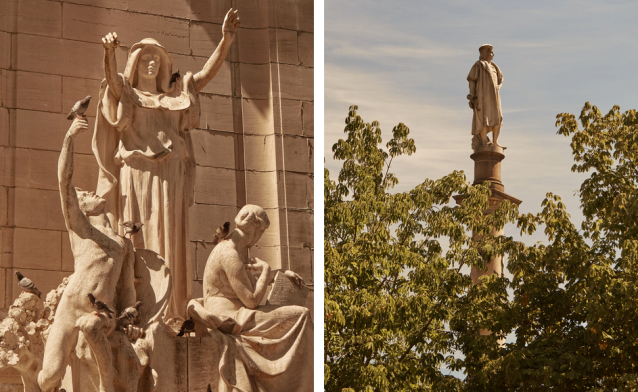 This blog was begun in 2009 as a feature of the Providence Journal, where I was on the editorial board and wrote a weekly column of architecture criticism for three decades. Architecture Here and There fights the style wars for classical architecture and against modern architecture, no holds barred. History Press asked me to write and in August 2017 published my first book, "Lost Providence." I am now writing my second book. My freelance writing on architecture and other topics addresses issues of design and culture locally and globally. I am a member of the board of the New England chapter of the Institute of Classical Architecture & Art, which bestowed an Arthur Ross Award on me in 2002. I work from Providence, R.I., where I live with my wife Victoria, my son Billy and our cat Gato. If you would like to employ my writing and editing to improve your work, please email me at my consultancy, dbrussat@gmail.com, or call 401.351.0457. Testimonial: "Your work is so wonderful - you now enter my mind and write what I would have written." - Nikos Salingaros, mathematician at the University of Texas, architectural theorist and author of many books.
View all posts by David Brussat →
This entry was posted in Architecture and tagged Billie Tsien, Carnegie Hall, Manhattan, Michael Kimmelman, Midtown, New York City, New York Times, Tod Williams. Bookmark the permalink.

4 Responses to They don’t get Carnegie Hall